The Coupeville School District’s mac and cheese isn’t your standard cafeteria fare of mushy pasta and over-processed cheese. It’s cauliflower mac and cheese, made by blending cauliflower grown by the farm school with cream and three (sometimes four) different cheeses. The sauce is poured over separately prepared pasta, and the whole thing is topped with toasted crumbs made from locally baked wood-fired bread and something green—typically green onions or parsley, depending on what is in season.

And that’s just one daily offering (albeit my own daughter’s favorite) at the 962-student district on Whidbey Island, a prime example of the farm-to-school programs robustly growing across Washington state.

It’s an evolution of legislation passed in 2008, seen then as a “leverage point for change” on several crucial and intersecting issues—children’s health, agricultural vitality, farmland preservation, environmental protection, and poverty alleviation, according to the Washington State Department of Agriculture (WSDA).

Borscht made from locally-sourced beets? Check. Italian sandwich with pesto made from school-farm-grown basil? Yum. Spaghetti with meatballs and a dessert of strawberry shortcake, with the hamburger and berries sourced from local heritage farms? Definitely. A salad bar stocked with broccoli raab, salad turnips, cherry tomatoes, cucumbers, lettuce, spinach and baby carrots grown from the school farm? Always a popular choice.

Such programs require a complicated blend of ingredients, both literal and figurative. But the rewards can be as great and as far-reaching as the challenge.

In Coupeville the idea began in 2013, with the Coupeville Farm to School group forming to build on-school gardens and support garden and food education learning opportunities. In 2019 the district stepped up to the farm-to-school plate, connecting the dots between the now-established school garden and education program with the cafeteria. With administration and school board support, Coupeville schools canceled their industrial food service contract, hired a long-time local chef as a food services director, and gave him the go-ahead to create a whole new school menu of scratch-cooked meals, made as much as possible from locally sourced ingredients. Since then, student participation in the district’s food program has shot up from just 20% to 75 to 80%, behavior has improved, and afternoon attendance rates have increased, says Steve King, superintendent of the Coupeville School District.

Instead of heading off campus to a nearby grocery store to grab processed snack foods, more of Coupeville’s secondary students are staying in the cafeteria for a healthy lunch, increasing the district’s afternoon attendance rates—and, King believes, improving student behavior in the process. Well-nourished students are more likely to succeed.

Coupeville’s numbers are a huge win for a school food services program and chronic health issues. U.S. children ages 2 to 19 consume 67% (a new high) of their daily calories from ultra-processed foods known for their poor nutrient quality, likely a significant contributing factor to U.S. childhood obesity rates more than doubling in children and tripling in adolescents over the past three decades. 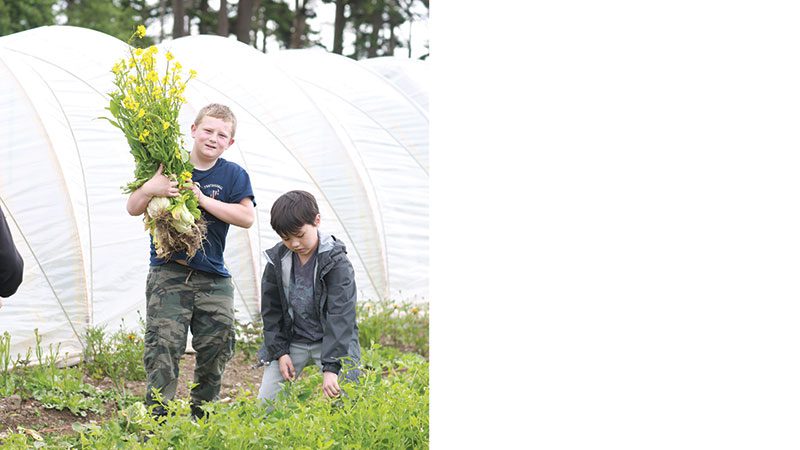 It’s been a slow process since Washington’s farm-to-school legislation passed in 2008. With limited funding and most school kitchens only able to accommodate pre-packaged, ready-to-warm foods purchased from national food service companies, the transition to more local food sourcing had been sluggish. How could the school serve locally grown potatoes when they didn’t even have a way to clean, peel or chop them?

But Washington’s farm-to-school participation has been slowly increasing and really began to take off in 2021 when state lawmakers dedicated $5 million in federal coronavirus relief funds to fund farm-to-school purchasing. That led to $1.5 million awarded for purchasing grants and another $3 million left for the 2022-23 school year. WSDA expects this funding to come out of state funds once the federal funding runs out, Slonim says.

Participation amongst Washington schools is proliferating (even if that’s only the occasional local food purchase); 53% of 152 school food authorities representing 1,098 individual schools started their farm-to-school involvement in the last three years, according to the U.S. Department of Agriculture (USDA) farm-to-school census.

Large and small districts alike are experimenting. Seattle Public Schools recently initiated an effort to introduce culturally relevant meals made from locally sourced ingredients to SPS’s 50,000-plus students and 106 schools. The new “Taste of SPS” program offers a monthly menu item prepared in small batches and rotated through 10 schools at a time.

But even with better funding for sourcing, local food programs face challenges. Schools are required to meet federal school nutritional standards. That’s easy when all the food comes pre-packaged and nutritionally formulated but is more complicated in a scratch-cooking scenario.

Coupeville solved that problem by hiring a chef as the food services director and a registered dietitian as his assistant.

Andreas Wurzrainer traded in the kitchen at Christopher’s, his longtime Coupeville restaurant, for the food services director job, bringing a chef mentality to the school kitchen. He does things like pickling hundreds of pounds of cucumbers from a bumper farm school harvest (using a garbage can) and introducing locally sourced seafood to school menus. The latter move led to a menu item of mussel chowder made from locally harvested Penn Cove shellfish. Wurzrainer wasn’t surprised when it garnered a following after student taste-tests, he is a five-time winner of the annual Coupeville Mussel Fest chowder competition.

“We’re on an island, we need to push seafood more. But nobody ever offers seafood in school. A lot of people think kids don’t like it, but I feel like it’s our obligation to introduce them to it. They might not love it. But at least they’ve had a chance to taste it,” Wurzrainer says.

If other districts want to follow Coupeville’s lead, they need to be willing to take some chances, Wurzrainer says.

Before he took over the kitchen, “I don’t think there was ever a raw meat that crossed a kitchen counter here. (School districts) look at everything as a liability. It becomes way easier not to do it. But at a certain point, you have to trust the process. We have to trust our training. How else are you ever going to bring local products into this kitchen if you’re worried about the dirt?” 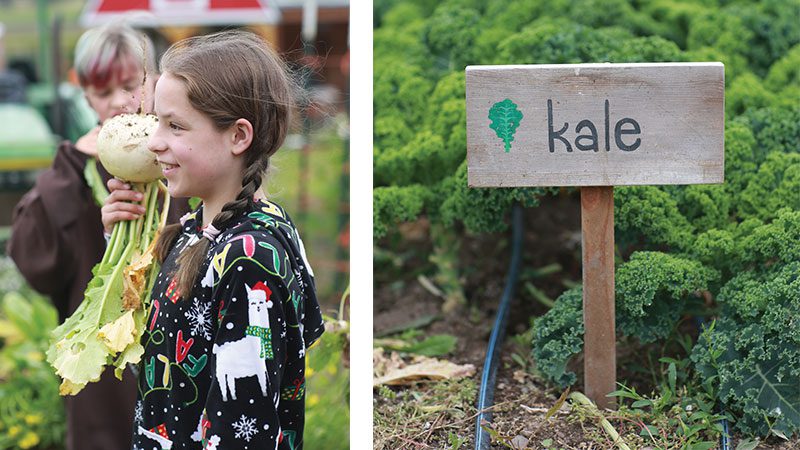 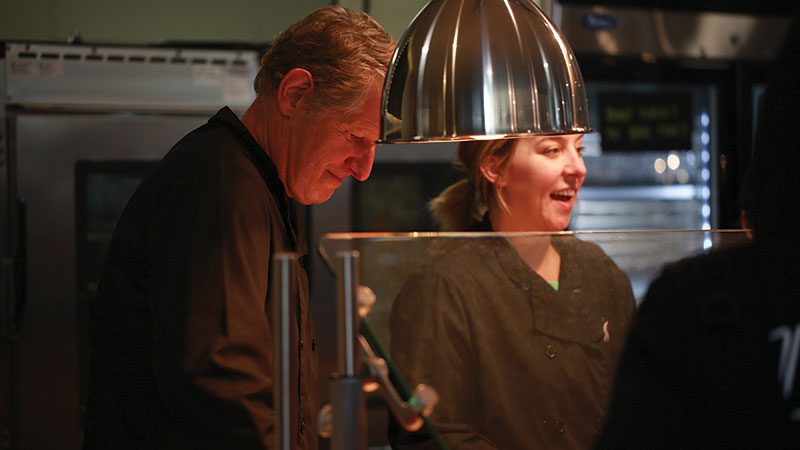 King recognized that from the get-go.

“When I came here, I looked at (Ebey’s) Prairie and all these farms, I thought, how come we can’t get all that food out here to these kids that we say we love so much in this building,” King says.“If we can’t do this in Coupeville, we can’t do this anywhere.”

Historically, crops grown on the fertile natural prairie soils of Ebey’s Prairie just south of the school campus were shipped by steamboat to the growing settlements in Seattle and Olympia.

The same historic farm-to-market road that once took the prairie crops to market goes right past a new one-acre school farm, growing food for Wurzrainer to use and serving as an outdoor learning center. Elementary students traipse through the stand of towering Douglas firs bordering the elementary school campus to access the farm.

On one recent day, it was Sarah Boin’s fourth-grade class.

Neal quickly puts the fourth-graders to work. “Okay, who’s ready to be a human tractor?” she shouts, directing half the class to pull up an old bed of radishes and turnips. One lucky fourth grader pulls up an oversized Japanese salad turnip. She cleverly names the gleaming white, softball-size globe “Bald Ross,” a play on painter Bob Ross.

Bar-Chaim leads the other half of the class on a farm tour, pointing out bean plants (only slightly slug-damaged), developing buds on sunflower plants, and a row of thick green, knee-high grass.

“What kind of grass is this? In cooking, we’ve been talking about cereal grains. You can use this to make flour,” Bar-Chaim hints. The kids quickly catch on; they’re looking at a patch of young wheat plants.

Combining experiential learning, participating in the growing process and learning about cooking and nutrition turns kids that normally would have refused to touch these vegetables—like salad turnips—into “brave eaters,” Boin says. That’s part of the farm-to-school strategy as well, using language that encourages students to try new foods and deflates peer pressure.

Instead of yelling “yuck!” when they don’t like something, Coupeville elementary students are taught to say, “this isn’t for me.”

But the best part is “when they get to see the stuff they grew in the cafeteria,” Boin says, which will happen in about an hour, when her class goes for lunch. Served on today’s salad bar? Fresh, whole salad turnips. 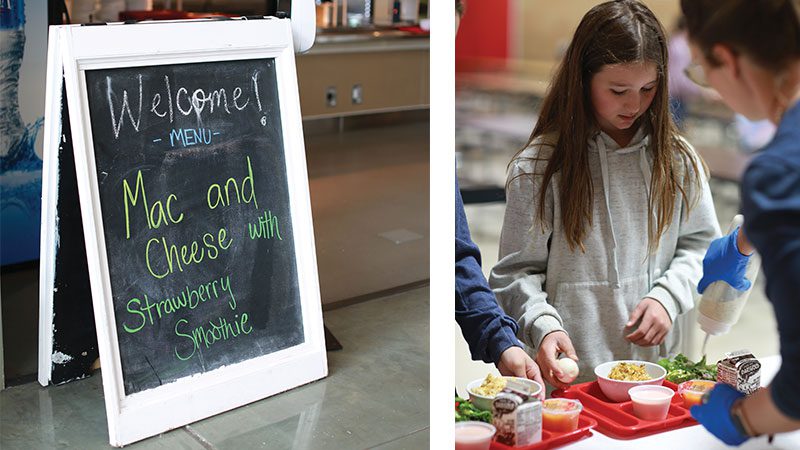 Eating what they grow

At the cafeteria, the students are greeted with a large “Welcome!” sign listing the day’s hot lunch special. (It’s mac and cheese day, my daughter is thrilled!) Educational notes pepper the salad bar. Did you know that bananas share 50% of their DNA with humans? I didn’t.

It’s a full-circle, synergistic solution, not just bringing healthy food into the school but teaching kids that the cafeteria food can be good for them and tasty too. That’s a huge shift in student mentality, says Laura Luginbill, Coupeville’s assistant food services director.

“I’ve got kids that come through the (daily lunch) line, and they just say to me, ‘You know,’” Luginbill says with a laugh. These kids have become “regulars” of the daily lunch offering. “There are kids that just trust us now.”

Nobody is resting on their laurels. King would like to introduce a breakfast program (the district currently doesn’t have one). Wurzrainer wants to extend the culinary education and cooking lessons that Bar-Chaim has perfected at the elementary level into middle and high school. The farm garden is rapidly expanding, with more crops and (hopefully soon) a hoop house area to extend the growing season.

King doesn’t buy into the sentiment that, compared to Coupeville, other districts are too big, or too far removed from local agriculture to do what they have done. Coupeville purchases from local farmers all over the state, not just neighboring farms. All it takes, King says, is a willingness for a community, district and school board to agree their children deserve something better than the typical cafeteria fare.

“If you have guests over and you served them frozen pizza and a canned vegetable item, what does that say to your guests? If you make a home-cooked scratch meal you’re saying another thing to your guests,” King says, challenging his fellow districts to take up the mantle of farm-to-school and scratch cooking. “This shows you love your kids.”

Georgie Smith is a fourth-generation farmer on Whidbey Island. She writes about food and farming.

Meet Leo Munoz from the View Ridge PCC and Jared Cohen from the Issaquah PCC!

The “Dirty Dozen” and “Clean Fifteen” lists compiled by the Environmental Working Group are a good guide for when to prioritize organic produce if you have to make a choice. See what’s new for 2022.