This article was originally published in September 2021 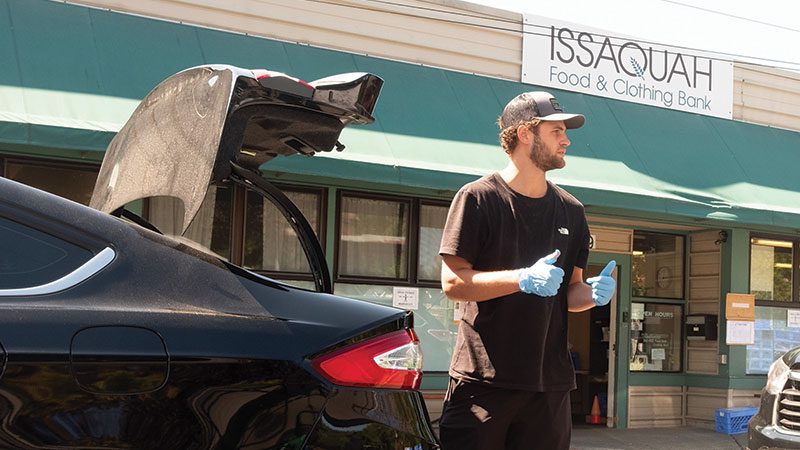 Matthew Cannon loads a client’s trunk at the Issaquah Food and Clothing Bank and asks another volunteer if the car is “good to go.” All photos by Meryl Schenker.

The 17 food banks in the new program have their own accounts with PCC’s distributor, United Natural Foods Inc. (UNFI). They can directly order whichever items they need, choosing from tens of thousands of items and scheduling whatever times and quantities work best for them.

The unusual program supports a growing national push toward “nutrition security.” That’s the idea that addressing community needs means considering the quality of calories that people eat as well as the quantity. It’s also in line with a growing consensus among food banks and nutrition programs that one-size-fits-all programs often fall short.

For decades, PCC would provide bulk foods for its partner food banks six times a year, overseeing orders from a short list of options like rice or granola.

In the new program, PCC started off each food bank’s UNFI account with $4,000 apiece funded through member donations, and will continue to contribute through regular member fundraising drives. Participants are not limited to PCC’s donations; they can use other funds to purchase more through UNFI.

“I think that the payoff is autonomy,” said Katy Ludwig, PCC’s account manager for UNFI, who was approached by Rachel Tefft, PCC’s community nutrition program manager, to see if such a program could work.

“This gives them access, or the opportunity, to purchase clean organic food where they may or may not have had access to that (before).”

Clients might be interested in low-sodium soups, for instance, or less common varieties of whole grains, or personal care products, or the ability to select a larger number of products in smaller quantities than were previously available.

“When Rachel explained the program to me, I was really excited because I know how challenging it is to get food, clean food. As somebody who has struggled with money in her life and eating healthfully, I just wanted to make it (work), I wanted to remove as many obstacles as I had the power to,” Ludwig said. 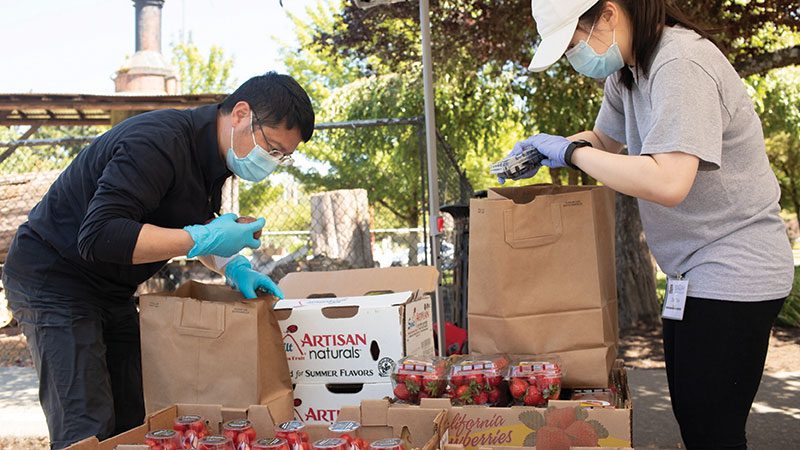 “We agreed, ‘Oh yeah, what a great idea, this is really cool.’ But there never was a food bank program, so to speak. (We said) ‘this actually doesn’t exist, so we need to figure out what we want out of this and turn it into something.”

A few food banks had existing UNFI accounts but it’s unusual for most to be affiliated with a natural foods distributor. Some other co-ops and natural foods producers have tried to increase opportunities for food bank partners, though the concept is still uncommon. The Community Food Co-op in Bellingham, for instance, buys a large annual order of baby food through UNFI for its partner food banks, said Melissa Elkins, sustainability coordinator and administrative manager, and they’d be interested in setting up a program like PCC’s as well. Bob’s Red Mill, the employee-owned whole grains company based in Oregon, donates food directly to the Oregon Food Bank and other agencies.

Such programs are rare in part because of the traditional assumption that quantity and calories are the most important factors in food donations, rather than nutrition and quality.

“It is more expensive (buying organics) than buying conventional produce,” said Brian Sindel, food bank manager of Jewish Family Services (JFS), which nonetheless participated in the pilot. “We’ve long had an action plan at our food bank where we explicitly, when possible, are looking to choose local, healthy organic options for the foods being produced.” This is the first time JFS has been connected with organic-specific wholesalers, he said, both with UNFI and with Organically Grown Company, one of PCC’s major sources of fruits and vegetables.

Such partnerships were always technically feasible, but “I don’t think it would have ever crossed our minds to do that without Rachel kind of seeding that idea,” Sindel said.

“It is more expensive, but we also believe, when possible, that the people who visit our food bank also have a right to that quality of products. And we do work with a number of people who request organic food,” he said. “I’ve spoken with a number of people who are going through cancer treatment or have recovered from cancer and specifically said they’re on organic-only diets and they have a really hard time finding that at food banks.” 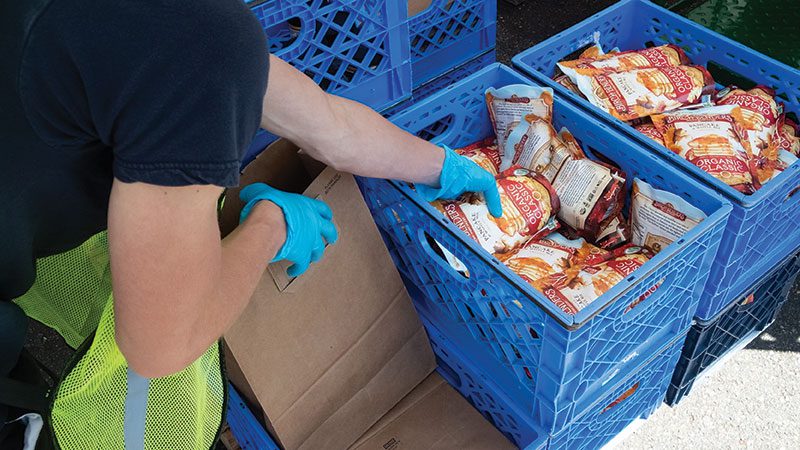 Supplies from the partnership with UNFI include organic pancake mix and jam.

Some of the first needs met by the program went beyond food. JFS was short on toilet paper for clients and also needed quality paper bags that wouldn’t rip when full. The organization was able to order both through UNFI. Another bonus, given the small storage space at the open-to-everyone food bank, has been the option to order food more frequently and in smaller quantities.

Those sorts of issues directly contributed to the new approach (though practical limitations caused by the COVID-19 pandemic sped up the timeline), said Tefft. Food bank colleagues had needs that sometimes varied over time or didn’t appear on the list of options she would email. Attempts to address needs like cooking oils or even coffee sometimes weren’t logistically possible in the previous bulk program. Practical issues like notifications of delivery delays or refunds would go through PCC rather than the individual food banks, further complicating the options.

At the Issaquah Food Bank, manager Mike Hatada said the new program and other new PCC initiatives have helped with several improvements. (PCC’s farm to food bank program, for instance, has helped provide a vast assortment of fresh foods for the first time.)

The organic options are important to their residents, he said, and it’s “extraordinarily—really, I think—important to be able to offer our clients more choices and to really try to offer the nutritious selection that we feel in Issaquah is possible.”

“The items that we’re able to select really resonate with our clients and are items that we wouldn’t typically receive donated,” such as dried fruit.

It’s also an improvement to be able to vary the items and the schedule of support. The Issaquah food bank was able to save most of its PCC funds for the summer under the new program, he said, providing nutritious meals for students who didn’t have access to the school programs they’d had during the school year. He planned to use about three quarters of the initial funds for dairy products for students.

Hatada appreciated the ability to re-evaluate the program to meet current needs “rather than just operating under the historic framework of “we’ve been doing this for all these years, why don’t we continue?” 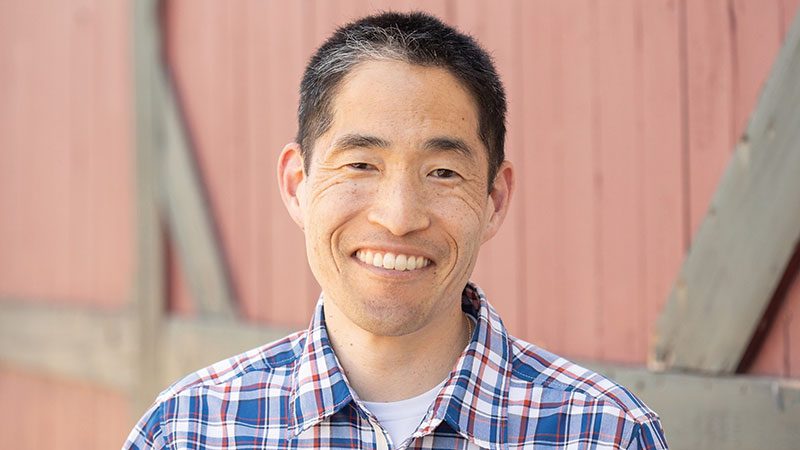 Some parts of the old program will be missed, though. The monthly “packaging parties’ for each food bank where volunteers would repackage the bulk foods with a PCC staff member were sources of community and connection. When the COVID-19 pandemic prevented such gatherings, though, it was a chance to move forward with other services.

Food banks have evolved in many ways in recent years (see “The Evolution of Seattle’s Food Banks”), and there’s a growing consensus that autonomy and improved nutrition are crucial priorities.

“For decades, U.S. policies to address hunger and food insecurity have focused largely on providing sufficient calories or quantities of food,” according to a recent article in the Journal of the American Medical Association. “However, effectively addressing the current diet-related challenges in the U.S. will require a shift beyond these concepts to the broader concept of nutrition security.”

Ludwig, at UNFI, hopes the PCC program can spread to other food banks to the point where they have enough purchasing power to qualify for volume discounts and can get more food for the money.

For now, they’re getting a solid start.

What you should know about calcium and supplements

Calcium is an essential nutrient to the human body, and researchers vigorously debate who should consider calcium supplementation and why.