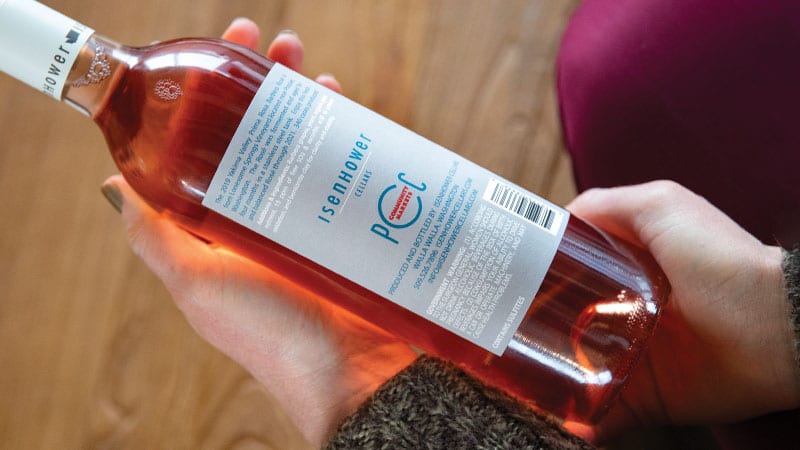 Read any “Introduction to Wine” or “Wine 101” tutorial and there will inevitably be a section on how to decipher the label. Vintage, appellation, alcohol by volume, varietal, producer, Surgeon General’s warning—it’s all on there. And for good reason—except for confirmed oenophiles or master sommeliers, those labels are an important guide to discern what you are drinking and (some would argue most importantly) where it is from.

Given all that is included on the wine label, there are notable absences—such as ingredients. Many people assume wine contains only grapes. In its purest form, wine could be just grapes and yeast; however, most winemakers also use a variety of additives, processing aids and fining agents (which improve clarity) to craft and “elevate” their products.

Many of these products don’t make it into the final product at detectable levels, but some do. And some are more “necessary” than others. Few would argue that Mega Purple, a type of grape juice concentrate, would meet that standard. “Some vintners add this to their wines to deepen the color and fatten mouth feel,” Jeff Cox, PCC’s beer and wine merchandiser, explains with a less than approving tone. Other potential “tools” and additives include egg whites, tartaric acid, bentonite clay, water—the list goes on.

According to Brett Isenhower of Isenhower Cellars, a local Washington winemaker, “There is a plethora of food-grade products that are legal to add to wine or juice but to the uneducated may sound scary and unnatural. Look on the back label of any food product and read of all the food dyes, preservatives, additives and ‘natural flavors.’ Many of these products are also found in wine but not required to be disclosed.”

If this is raising concerns, you are not alone and neither is wine. In today’s food world, we are used to mandated transparency about not only ingredients, but also nutritional information, allergens, additives and more. Not only are many of these disclosures required, some have even received upgrades to ensure more accurate disclosures and clarity for the consumer (see our Jan/Feb 2020 Sound Consumer article on the new nutritional labels).

Alcohol as a whole, however, is not included in those commonly relied-upon mandatory disclosures.

The explanation for this division is confusing and complicated, but the main reason for this divide between food and alcohol is that most alcohol labeling is regulated by a different set of laws and rules, with primary regulatory authority resting in the Alcohol and Tobacco Tax and Trade Bureau (TTB), not the U.S. Food and Drug Administration. Just to make it more challenging, there are exceptions based on percentages of alcohol and specific ingredients (like malted grain).

Up until 2013, information like serving size and number of servings per container were even prohibited from being on the label. Now, all of that information is optional, so long as it is truthful and not misleading. So why aren’t we seeing more of it? Or why haven’t we seen it mandated?

It’s not for lack of effort or debate. Many in the alcohol industry, especially wine groups, have traditionally argued it is too difficult for winemakers to accurately assess nutrient content before the final bottling stages. Some claim that ingredient disclosure would force disclosure of trade secrets. Others point out that misaligned definitions and requirements across international regulatory regimes would provide significant hurdles. There are even assertions that this kind of information is not important to consumers.

Of course, consumer advocacy organizations would disagree. According to a letter to the TTB from the Center for Science in the Public Interest, “The public has expressed an overwhelming interest in improved information on the labeling of alcoholic beverages,” citing 2003 polling data showing that 94% of those polled supported alcohol-content labeling on alcoholic beverages, 91% supported ingredient labeling, 89% supported labeling of calories content, and 84% supported serving size information.

Despite the decades-old debates and inability of the TTB to make forward progress, the tide does appear to be voluntarily changing on multiple fronts, both big (Bud Light announced this year it will be including ingredients and Serving Facts on its pack labels) and small.

And for smaller producers like Isenhower, it’s best to start somewhere. “Given that I do not own any vineyards, I thought the best I can do is disclose on the label what is in the bottle of wine and what I added, even though many of the additives are consumed by the fermentation or filtered out and are no longer present in the finished wine.”

What this means is that starting with his 2019 vintage, Isenhower will be listing everything he adds to the wine and exactly where the grapes are from. For example, in the 2019 Prima Rosa Barbera Rosé (a PCC exclusive), the label will list ingredients as Barbera grapes, minimum necessary sulfur dioxide. Following this list, the label will read, “In the winemaking process, the following were utilized: yeast, organic yeast nutrients, calcium carbonate to reduce excessive acidity and bentonite for stability.”

For Cox, it is an exciting opportunity to teach people more about the winemaking process. It also enhances transparency on the grape producers themselves. “Being able to minimize in-cellar intervention starts with good farming.”

While the transparency movement is still small (Cox notes only one other wine carried by PCC, Bonny Doon, is disclosing ingredients), it is a step in the right direction to support producers wanting to offer consumers a look inside the wine and winemaking process and give consumers the transparency they want. The label on Isenhower’s 2019 Prima Rosa asks, “What is in your wine?” In this case, at least, consumers will know the answer.

Aimee Simpson is PCC’s director of advocacy and product sustainability.