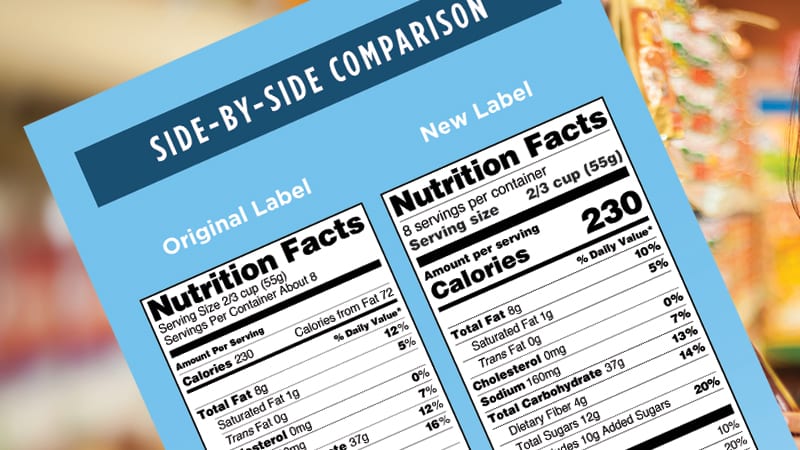 Consumers are getting some new tools to help make informed choices about what they eat.

As of Jan. 1, most packaged foods must display a revised version of the Nutrition Facts Label required by the U.S. Food and Drug Administration (FDA). It’s the biggest change to the standardized label in more than 20 years and will require producers to detail how much added sugar the products contain, among other changes. (Companies with less than $10 million in annual sales have until 2021 to use the new label, but many are already making the transition.)

The redesigned label “will help consumers eat healthier diets,” said Lindsay Moyer, senior nutritionist for the Center for Science in the Public Interest, a nonprofit watchdog and consumer advocacy group.

It’s likely to do that in two ways: It will give shoppers information they didn’t have before, possibly influencing what products they ultimately buy. Manufacturers might then adjust their recipes if they see a greater demand for more healthful products.

The Nutrition Facts Label is a powerful tool and is part of a regulatory process that has slowly evolved since processed foods became more prevalent in the American diet.

“What this panel is supposed to do is take something very complex, food, and a very complex question—‘What should I eat to be healthy?’—and distill it down into something very simple that people can understand without needing a degree in nutrition,” said Charlotte Vallaeys, senior policy analyst for food and nutrition for Consumer Reports, the nonprofit organization dedicated to unbiased consumer-oriented research and public education. A 2016 study by the organization found that 79% of consumers look at nutrition facts on the package when deciding whether to purchase a processed food item for the first time.

The federal government didn’t require such labeling a few generations back, when “meals were generally prepared at home from basic ingredients and there was little demand for nutritional information,” according to a history of nutrition labeling commissioned by Congress and published by the nonprofit Institute of Medicine (IOM).

Information on calories or sodium content was included on some packaged foods after 1941, but that data was meant for people with special dietary needs, not the general population. Even the original 1973 Nutrition Facts Label was optional unless manufacturers had added nutrients to the food or made health claims about it.

By 1989 pressure was rising to require a standardized nutrition label, when evidence-based links between diet and health became clearer and packaged foods strayed farther from whole unprocessed ingredients. Dr. Louis Sullivan, then secretary of the U.S. Department of Health and Human Services, warned that “The grocery store has become a Tower of Babel and consumers need to be linguists, scientists and mind readers to understand the many labels they see,” according to the IOM history. The panel was finally required as of 1994, under the terms of the 1990 federal Nutritional Labeling and Education Act, which also regulated health claims on labels. The major change since then has been requiring a listing for trans fat.

The current revision was based on further advances in our understanding of food and health.

The FDA received nearly 300,000 comments on proposed changes from all sides of the industry, including 457 form letters from employees of the Ocean Spray cooperative asking that cranberry products (e.g., dried Craisins) be exempt from the added sugar rule, since they are as nutrient-dense as foods with naturally occurring sugars. (The request was declined, but manufacturers may explain on the package that sugars are added for palatability because cranberries are naturally tart.)

PCC Community Markets also commented, applauding the FDA for an update that would provide “valuable information to help shoppers make more informed choices at the supermarket.” The letter stressed that the added sugars label should be required, not voluntary. One of the most important pieces of dietary advice PCC’s nutrition educator can provide, it said, is to follow the American Heart Association’s (AHA) recommendation to consume no more than 5% of calories from added sugars.

“Americans consume a whopping 16% of total calories from added sugars — triple the amount recommended by the AHA and the World Health Organization — but shoppers currently do not have the information available on food labels to make this needed dietary change,” the letter said in 2015.

“These things are part of federal regulations, and it takes a long time to make changes,” Vallaeys said. The highly regulated process does have some benefits: “Everyone has to put the same information on the label and has to calculate it in the same way, whether you’re Kraft or Kellogg.”

That may be an update — or overhaul — for yet another decade.

Here’s what to expect from what the FDA calls “the new and improved nutrition facts label,” with commentary from Vallaeys.

What can you learn from food labels? What’s the difference between “cage-free” eggs or a “certified humane” guarantee, or “certified organic” versus “made with organic ingredients”? Read the Sound Consumer’s “label lowdown” feature throughout 2020, where we’ll work with Consumer Reports and other expert sources to explain the protections different labels do—and don’t—provide. If there’s a label you’d like us to address, send recommendations to editor@pccmarkets.com.