This article was originally published in March 2017 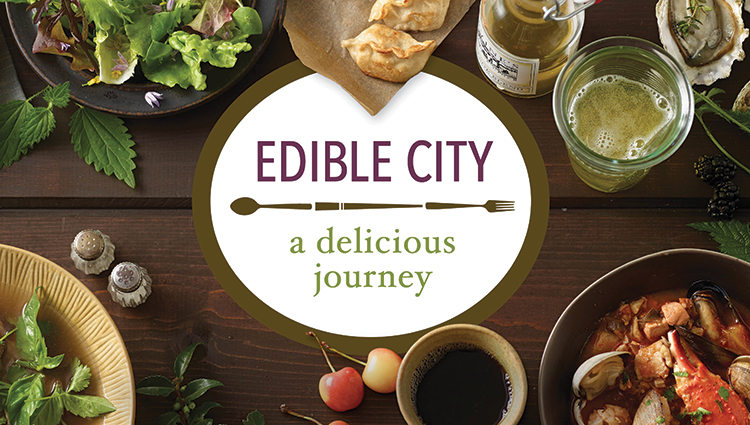 Does a salad recipe belong in a museum? It does when it’s PCC’s Emerald City Salad, one of the signatures of Seattle’s food scene featured in Edible City, an original exhibit on display through September at the Museum of History and Industry (mohai.org). Beyond the recipe, PCC contributed other artifacts that trace the co-op’s history. PCC is a supporting sponsor of the exhibit.

Through artifacts, photographs, films — and, yes, recipes — the 5,000-square-foot exhibit explores our city’s culinary history and what it truly means to be a Seattle food. The one thing that couldn’t fit in the display was real food, as it’s not allowed in the exhibit halls. Want a virtual taste, though? The Edible City book accompanying the exhibit will be available in some PCC stores, and we’ve printed a brief excerpt below along with a list of the show’s highlights.

The museum’s ongoing series of exhibit-related events are featured in the Sound Consumer monthly calendar — and if you just want the salad recipe, that’s available here.

In Seattle, food always has meant more than a meal.

Our journey from the earliest oyster middens to the modern four-star restaurants is a reflection of our geography, our history and our people.

Location is everything: Seattle is close to fishing and shellfish harvesting grounds, close to fertile farmland and foraging areas. Institutions dedicated to food are concentrated in our region, from the agricultural research labs at Washington State University to the fishing fleet headquartered here and the factories processing their catches.

Diversity is key to our success: Throughout generations, the city has attracted immigrants who bring their own culinary traditions and skills, with a lively population of young, creative and international residents hungry for familiar flavors. Seattle’s resources and natural beauty made it a place that, even when tough times came, people didn’t want to leave.

A commitment to homegrown foods went well beyond World War II Liberty Gardens here. A critical mass of idealists interested in self-sufficiency and fresh ingredients consistently has been balanced out by businesses and municipal support. A collaborative culture supports robust food co-ops and a closely connected network of farmers and chefs.

Size also matters: The city is large enough to accommodate new breakthroughs, yet still small enough to foster a sense of community.

The city has become one of the country’s top places to eat and innovate. And, while it took more than a century to establish a definable Seattle cuisine, its raw ingredients were here all along.

Reprinted with permission of the Museum of History & Industry.

Edible City covers a broad expanse of the region’s food history, from historic menus to gorgeously colored cannery labels to a 19th-century Duwamish woven cedar basket. Of course our favorite highlights include the 1978 photograph of the original PCC market in Ravenna, back when the bulk bin labels were still handwritten, and the photo of the Picardo farm in North Seattle, which became the city’s first P-Patch in the 1970s — with some help from PCC — instead of being sold for development. There’s also a spotlight on our region’s farmers markets and CSAs. Here are other features that might be of special interest to PCC members and shoppers:

Want to be part of the exhibit? MOHAI is sponsoring a “Chicken of the Month” contest featuring photos of local backyard chickens by the real coop in the exhibit. To enter, post your favorite local chicken photos on Instagram and tag them #ediblemohai.

To show appreciation for the hardworking employees who make this such a diverse and rich region for food and beverage, MOHAI invites food industry employees to experience “Edible City: A Delicious Journey” with complimentary admission. To redeem, please present a valid food handlers permit or food service employee ID at admissions. (Limit one complimentary admission per valid permit or service ID. Offer valid only on March 2, 2017.) See mohai.org for more details.

A panel discussion on Washington’s terroir, including a guided tasting of local cheese, honey and wine. Experts on geology, food, wine and cannabis will explore the ways natural phenomena help create our state’s most specific aromas and flavors. 21+ only. Cost: $15 MOHAI members, $20 general public.

Taste of the Market Culinary Series

Seattle journalist Rebekah Denn is a two-time winner of the James Beard award for food writing.

One of PCC's longtime partners is Food Action (formerly the Washington Sustainable Food and Farming Network), which recently refreshed its mission and is taking on several important issues in the coming year. Join them for a Good Food and Farming Advocacy Day on Monday, March 6.

For nearly a century, the German skincare company Weleda has pioneered clean body care with wild-crafted, organic and biodynamic ingredients from its own gardens, fair trade farms and cooperatives around the world. The company’s meticulous sourcing and attention to detail results in products that are game-changers in the pursuit of healthy, soft skin.

PCC Board of Trustees report, March 2017

Board meeting, Board election, Am I ready to vote?, and more