We’re excited to announce that our second Community Grant of 2017 has been awarded to Alleycat Acres.

Alleycat Acres focuses on transforming underutilized urban space into neighborhood-run farms. The organization is devoted to the idea that farming connects us to our surroundings and that urban food systems are key in creating healthy communities. Past projects include an edible walking trail on Seattle City Light’s Duwamish Valley transmission corridor and a series of “farmsteads” in parking strips across the Central District.

PCC’s $2,000 Community Grant will be used for the Village Community Garden — garden space that Alleycat Acres has cultivated near the intersection of Jackson and 23rd in the Central District.

Since 2015, the project has transformed the parking strip, spanning one city block, into a thriving community farm, engaging both building residents and the broader neighborhood. By the end of 2016, the project reached 20% completion. The goals for 2017 are to develop education programing, secure garden space, purchase plants, and partly fund a tool shed including children’s tools. All food grown goes to those who tend the garden (250 – 300 people). All extra produce is donated to the Cherry Street Food Bank. Congratulations! 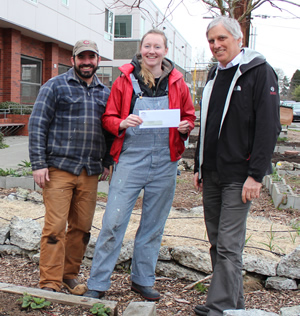