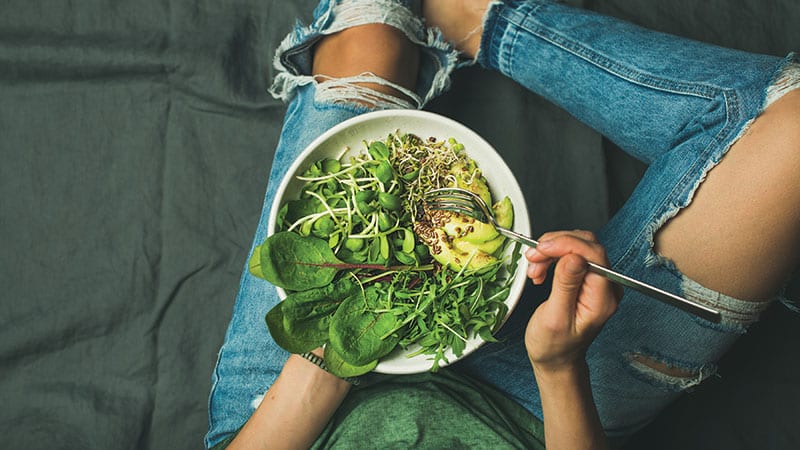 I’m not actually vegan. In fact, this isn’t just about animal products. Let me explain.

In 2018 I received some very unfortunate news: I had rheumatoid arthritis (RA). On the bright side, we’d caught it early (I was only 26), so remission was a very real possibility. My doctor walked me through an exhaustive list of medications—the results of a decades-long quest to crack this evasive autoimmune disorder.

He then prescribed dietary changes, instructing me to avoid red meat, added sugar, alcohol and anything deep-fried. I signed up for an anti-inflammation cooking class that recommended I limit dairy and pile on leafy greens and omega-3s (hello, seafood). You know, the kinds of things we’re all supposed to be doing anyway.

At this point I was a vegetarian, and had been for three years. When I first made the switch in 2015, convinced by the ecological carnage of industrial meat (which was the only kind of meat I could afford at the time), many of my friends didn’t notice or didn’t care—I brought my faux sausage to pizza night and life carried on.

There were others, though, who took my protein intake very personally. They ate everything except tofu, considered themselves to be the norm, and grew evermore vocal about the benefits of their unbeatable barbecue ribs when they felt that norm was threatened.

So, being someone who had chosen a diet they saw as abnormal, I learned to order my sweet potato tacos quickly and covertly in their presence. I didn’t want to make anyone uncomfortable, and I was tired of fending off hostility.

Given those issues with meat alone, I braced myself for added condemnation after cutting out cheese, ice cream and French fries, too. Shortly after my diagnosis, a friend invited me out for happy hour. I contemplated and decided that a menu full of deep-fried bar food was a minefield I wasn’t ready to navigate, even if I would ultimately be able to find choices that met my restrictions. I shrugged: “Sorry, I can’t.”

I added, as if an afterthought, “Doctor’s orders.”

First, he scoffed. “Your doctor said you can’t go to happy hour?” When I explained, his antagonism transformed instantly into sympathy: “Oh, that sucks. I’m sorry.”

I was grateful to be left alone to eat what I pleased (or, to not eat what I didn’t please) without judgment, but it bugged me that it had taken a medical condition for my broader community to get on board. Previously in my circle, if I wanted to skip dessert or stick to one drink, the responses were like clockwork: “Oh, come on. Live a little!” Now, my diagnosis shielded me from social pressure to consume anything that wouldn’t make me feel good. I had learned to deliberately and carefully steer my preferences away from others’ plates to make them comfortable, but apparently, I needed a doctor’s note to keep their mac and cheese off mine.

Whatever the case, it worked. I started to feel a lot better.

Meanwhile, I’d discovered that the “vegan” label made grocery shopping and meal planning according to my new diet a lot easier. Many vegan products and recipes excluded not only meat and dairy, but also the added sugars that I was trying to avoid. Though I ate plenty of non-vegan foods like fish and eggs—both of which help with anti-inflammation—I also learned distinctly vegan techniques, like how to make and use flax egg. (This, incidentally, became very handy during the pandemic-induced egg shortage.)

As I started filling our kitchen with effectively vegan ingredients, I became more comfortable using the terminology, and the vegans in my life noticed. They welcomed me with open arms. I never actually said, “I’m vegan,” but before I knew it we were exchanging restaurant recommendations and discussing the merits of emerging plant-based meat substitutes.

It was all bliss until someone asked me what I swapped in when a recipe called for fish sauce. Just like that, the ruse was up.

As I broke the news of my experimental vegan-ish-ness, their disenchanted expressions reminded me of my futile, pre-RA attempts to explain my vegetarianism, and why I’d gone to such lengths to avoid the conversation. It felt like a wall had gone up—that I’d lost access to something, or someone, because I loved eating eggs.

Of course, the dietary choices I make can negatively impact the lives of others. Industrial agriculture’s impact on the health of animals, people and the planet is apparent, and as far as I am able I will avoid participating in it. As I reintroduced some animal proteins into my diet (with red meat still off the table), I took the time to learn about the best possible source of each. I also learned about the human and environmental consequences of other mass-produced commodities like soybeans and sugar cane.

I didn’t start eating certain meats again because someone yelled at me over a plate of chicken enchiladas. It was primarily because I gained access to better foods, ones that met my standards for worker safety and animal welfare.

Food has an unmatched ability to bring people together. Unfortunately, we can also use food to divide ourselves. I still often let social circumstances influence what I eat, and even how much I eat. If I’m traveling, or if someone else cooks for me, I’ll be more inclined to break my rules. It really depends on the level of inflammation I can anticipate from the cuisine prepared. This has, in the past, been especially tricky to navigate during the holidays.

But one thing we’ve collectively learned this year is how to creatively adapt.

Since my diagnosis, I’ve embraced non-traditional holiday foods that still offer the flavors, textures and substance of a fall feast. I bake some biscuits with Earth Balance, others with lard. I mash cauliflower instead of the potatoes that aggravate my arthritis, and drizzle it with mushroom gravy.

When folks go back for seconds, I know a new tradition has begun.

Sarah Reeves is a writer and Northwest native who has worked within the local food system for the last eight years.