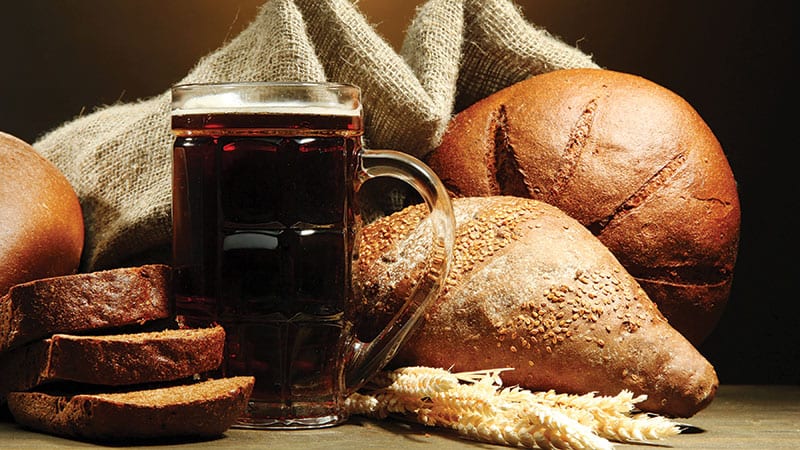 Until recently, the word “upcycling” was associated with the manufacturing industry. Upcycling means recycling items into new, higher-value products, like converting plastic bottles into fleece clothing.

Upcycling has always been a staple of home cooking, though—it’s as basic as using stale bread to bake a crunchy breadcrumb topping for a casserole. And upcycled food is now entering a new era in markets and in restaurants, as interest grows in reducing food waste for both economic and environmental reasons.

Food producers have always worked to find efficient ways of using their byproducts, though the results haven’t always been celebrated. By far the most common choice has been to sell these foodstuffs—think spent grain after brewing beer, or vegetable pulp from juicing—for use as animal feed or soil amendment. A loftier goal is to reclaim these foods for direct human consumption. PCC carries several upcycled foods (see below) and is interested in adding more, said associate grocery merchandiser Noah Smith. The catch is that they have to taste good in addition to their environmental benefits, a bar that can be higher when dealing with byproducts than with the original raw material.

Some local breweries are helping lead the way to quality flavors, reclaiming at least part of their spent grain for baking. Pike Brewing uses spent grain from Pike Nellie, one of Seattle’s only organic beers, to make the soft pretzels served at The Pike Pub and Tankard & Tun, the brewery’s two restaurants. Elliott Bay Brewing turns theirs into the tender, slightly sweet burger buns used at their three locations.

The milk that dairy cattle produce leads to another ingredient that merits upcycling. Whey is the high-protein, high-sugar liquid byproduct that results when milk is made into yogurt and cheese—up to 9 pounds of whey for a single pound of cheese, or two cups of whey for a single cup of Greek yogurt.

Until recently, the majority of whey was routed either into hog feed or spread on agricultural fields. It contributes some benefit to the soil thanks to its nitrogen and phosphorus, but can also damage the watershed by contributing to algae growth. This led cheese-producing states like Wisconsin and California to tighten regulations regarding its use and made it necessary for cheese makers to rethink its second life.

Protein powders like PCC’s Show Me The Whey Protein Powder proved a terrific answer. To make it, the liquid whey is filtered to separate lactose (sugar) from the protein, and the protein is then dried into a powder and blended with natural flavorings and thickeners. With all 20 amino acids, whey powder is also common in nutritional drinks for sports recovery and senior nutrition, as well as infant formula.

The fibrous, still-nutritious vegetable pulp that remains after juicing needed a different solution.

California-based Forager’s Project makes a number of plant-based beverages, and they decided that salty snacks were the best way to upcycle their high-fiber scraps back into the food supply.

Originally, they created different chip flavors from three separate sources of vegetable pulp: greens, beets and roots. They quickly developed a supply problem, because their most popular chip didn’t coincide with their most popular juice. Attempts to reclaim beet pulp from other juice companies didn’t offer a consistent solution, so they adjusted their chip offerings. Pulped greens—mainly kale and spinach—are now added to a base of blended grains and seeds to make these crunchy, high-fiber chips.

Local company Shen Zen Tea has similar zero-waste goals in mind for their line of kombuchas and teas, but with even less processing. Founder and co-owner James Chang explains, “The berries and ginger we use in the teas are actually the same we use for juicing in our kombucha. We do a gentle cold press to extract the juice, and then dehydrate the herbs and berries for teas such that there is no waste.”

You can spot the overlapping ingredients in flavors like their Raspberry Kombucha (with organic, cold-pressed raspberry juice) and Raspberry Green Tea (with whole, dehydrated raspberries and dragonwell green tea).

In some cases, the entire company was created in order to rescue a product that isn’t normally available in the marketplace.

WTRMLN WTR got briefly famous when Beyoncé invested, but its roots are less glamorous. Their flavors begin with watermelons that farmers couldn’t sell because of size or surface blemishes and used to till back into the soil rather than harvest. Founder Jody Levy was aghast to learn that in the U.S., nearly 800 millions pounds of watermelon were meeting this fate each year. Making juice from “seconds”—fruit that isn’t sellable through typical retail channels—isn’t unusual for apples, oranges and grapes, but it was a new idea when applied to melons.

And that might be the most interesting thing about upcycling food: it turns out not to be difficult at all to make nutritious, tasty food by thinking just slightly out of the box.

Jill Lightner has been writing about eating, drinking and farming for almost 20 years. Her latest book is “Scraps, Peels, and Stems: Recipes and Tips for Rethinking Food Waste at Home.”