The American Olive Oil Producers Association (AOOPA) has formally requested the Food and Drug Administration (FDA) set and enforce quality standards for different kinds of olive oil. In a citizens’ petition, the association argued that the current dearth of industry regulation is causing “widespread mislabeling of grades, adulteration, consumer mistrust, and unfair and unethical industry business practices.” Currently, olive oil standards are shaped by a patchwork of overlapping, yet largely unenforced guidelines established by both domestic and international stakeholders. (New Food Economy) 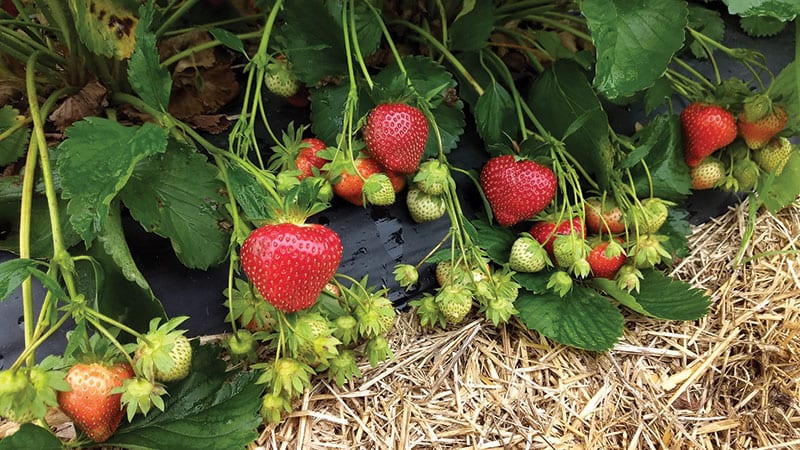 The U.S. Department of Agriculture (USDA) has released a new strawberry cultivar known as “Keepsake.” It is the first resulting from an increased effort by the USDA Agricultural Research Service (ARS) at Beltsville, Maryland, to develop strawberries with improved shelf life. “Keepsake” is very closely related to “Flavorfest,” a strawberry plant also developed through traditional breeding practices by this project in 2012. (USDA)

The first season of limited commercial robotic picking of U.S. apples fell short of its goal, though the CEO of the robotics company involved believes it will soon reach the mark. Limited volumes of various apple varieties were picked in Central Washington in 2019 for more than 10 companies. The robotic picker involved is capable of picking one apple per second, but the trial showed the robotic arms and mechanisms that physically do the picking were not yet durable enough. (Capital Press)

The country’s biggest blueberry producer has been barred from recruiting foreign agricultural guest workers for three years and will have to pay $3.5 million in back wages and penalties as part of a court agreement reached with the U.S. Department of Labor. Munger Bros., based in Delano, Calif., shunned or failed to adequately recruit U.S.-based workers in favor of foreign guest workers recruited under the federal H-2A visa program, according to the Labor Department. Once here, those guest workers weren’t adequately paid and were housed in unsanitary facilities. (Los Angeles Times) 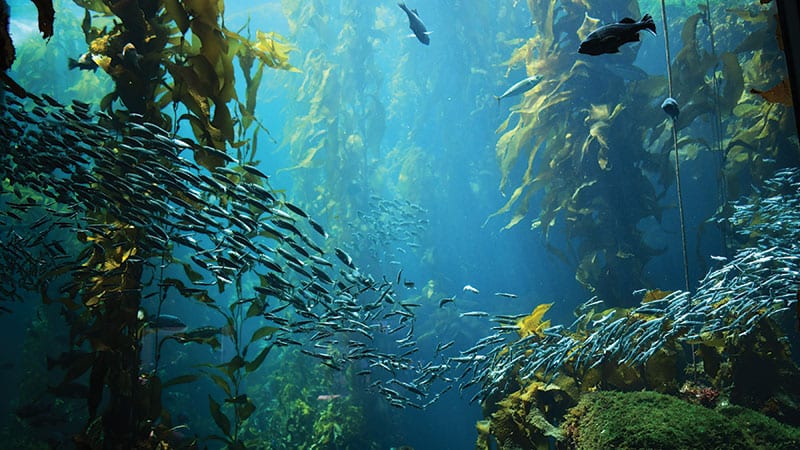 Over the past few years, Washington state’s kelp forests have started disappearing, as ocean temperatures and levels of pollution and dissolved carbon have risen. But even as wild copses recede, a group of forward-thinking algae advocates is developing strategies to jumpstart a commercial kelp and seaweed industry in the region. In the process, those advocates stand to help prospective farmers break into a $6 billion global industry and maybe even buffer some ecological damage from wild kelp loss. (Crosscut.com)

Two Long Island, New York, corporations and their owners pleaded guilty in federal court for their scheme to falsely label seafood that they later sold across the country. In a plea agreement with the government, Roy Tuccillo Sr, 59, and his son, Roy Tuccillo Jr, 32, both of Jericho, New York, and two of their Westbury, New York, food processing and distribution companies, Anchor Frozen Foods, Inc. and Advanced Frozen Foods, Inc., pleaded to conspiracy to commit wire fraud. They admitted to importing giant squid from Peru, marketing it as octopus, and selling it to grocery stores in a move that involved more than 113,000 pounds of squid from 2011 to 2014. (U.S. Department of Justice)

An analysis of 72 hours of children’s television programming found that junk-food marketing has not decreased since 2012, the last time researchers at the nonprofit Center for Science in the Public Interest (CSPI) scanned the airwaves for junk-food ads on kids’ TV. Virtually all the food and beverage advertisements captured during CSPI’s analysis of 2018 programming were for unhealthy products, as defined by nutrition standards developed by a federal interagency task force. The lack of progress comes despite the implementation in 2013 of uniform nutrition standards by an industry self-regulatory group. (CSPI)

The King County Council has committed nearly $400,000 to better understand how discharges from its wastewater plants affect juvenile salmon and the Southern Resident Killer Whales (orcas) that feed on them. Researchers will explore how effluent from King County’s three largest plants and nearby waters affect orca prey species and orca exposure. They will look for contaminants of emerging concern—like pharmaceuticals and personal care products—as well as enduring industrial chemicals, like PCBs. (Crosscut.com)

Five new members joined the National Organic Standards Board (NOSB) in January to begin five-year terms. Nathaniel Powell-Palm operates a 1,000-acre certified organic farm in Montana, Kimberly Huseman is a third-generation wheat farmer and cattlewoman and currently the director of Specialty Ingredients for Pilgrim’s, Gerard D’Amore is currently with Munger Farms and has previous experience with Dole Fresh and Chiquita Brands, Mindee Jeffery recently became the grocery manager of Eastside Food Co-op in Minnesota and previously was senior regional manager for the Independent Natural Food Retailers Association, and Wood Turner is senior vice president of sustainability for Agriculture Capital. The 15-member NOSB is a federal advisory board established under the Organic Foods Production Act of 1990. (USDA)

The number of family farms seeking bankruptcy protection grew 24% over the last year, according to an American Farm Bureau Federation analysis of recent federal court data. The analysis found family farm bankruptcies are rising fastest in the Northwest, where 33 farms filed for Chapter 12 protection over the time period measured. Most of the farms were in Idaho and Montana, but the figure includes Oregon apple farmers struck by tariffs in their major export markets. (Oregon Public Broadcasting)

Americans remain shaky on the details of climate science even as they have grown increasingly concerned about human activity warming the Earth, according to a national poll by The Washington Post and the Kaiser Family Foundation (KFF) that probed the public’s understanding of climate change. For example, 43% of adults and 57% of teens cited “plastic bottles and bags” as a “major” contributor to climate change, which is incorrect. A rising sense of alarm is one of the poll’s most dramatic findings: In just five years, the percentage of people calling climate change a “crisis” has jumped from 23% to 38%. (The Washington Post)

Michigan’s second-highest court has dealt a legal blow to Nestlé’s Ice Mountain water brand, ruling that the company’s commercial water-bottling operation is “not an essential public service” or a public water supply. The court of appeals ruling is a victory for Osceola township, a small mid-Michigan town that blocked Nestlé from building a pumping station that doesn’t comply with its zoning laws. But the case could also throw a wrench in Nestlé’s attempts to privatize water around the country: If it is to carry out such plans, then it will need to be legally recognized as a public water source that provides an essential public service. (The Guardian)

The underground ice cellars used in Alaska Native communities for generations to store whale meat are becoming increasingly unreliable. Residents and researchers say the problem has been building for decades as a warming climate touches multiple facets of life in the far north—thawing permafrost, disruptions in hunting patterns, and shorter periods of coastal ice that historically protected coastal communities from powerful storms. The changes have increased vulnerability to foodborne illnesses and raised concerns about food security, according to studies by the Alaska Native Tribal Health Consortium. (The Associated Press)

A study from Oregon State University recommends preserving, rather than logging, most forests in the Oregon and Washington Coast and Cascade mountain ranges. Doing so could mitigate climate change through carbon sequestration and enhance biodiversity, according to the study in the journal Ecological Applications. Not logging the forests, which also include pockets in the northern Rocky Mountains, would be the carbon dioxide equivalent of halting eight years of fossil fuel burning in the 11 western states, the scientists found. (Statesman Journal)

Legislation governing the rules around wineries, distilleries and breweries in unincorporated King County have been updated for the first time since 2003. The new rules clarify ambiguities that have caused conflicts as the industry has grown in recent years, according to King County Councilwoman Claudia Balducci. She said the changes try to tie businesses to the land and preserve the rural character of eastern King County and Vashon Island, including a requirement that rural businesses produce the beverages that they sell on-site. (King County Council Communications)

The FDA has given Barry Callebaut a permit to label up to 60 million pounds of its pink-hued confection as “ruby chocolate” in the United States. The permit involves a dark pink chocolate made from a distinct cacao bean discovered by scientists working at the chocolate ingredients giant more than a generation ago. In recent years, the company found out how to process these beans and get ruby chocolate, a dark pink chocolate with a distinct taste reminiscent of berries, which was first unveiled to consumers in Asia in 2017. (FoodDive.com)

The U.S. sugar beet harvest was down about 10% last year, and economists at USDA estimate that meeting the domestic demand for sugar will take 3.86 million tons of imported sugar. Most of it will come from Mexico, because trade agreements give Mexico first dibs on the American market. The U.S. hasn’t imported so much sugar since 1981, back when Americans consumed more sugar and less high-fructose corn syrup. (NPR.org)