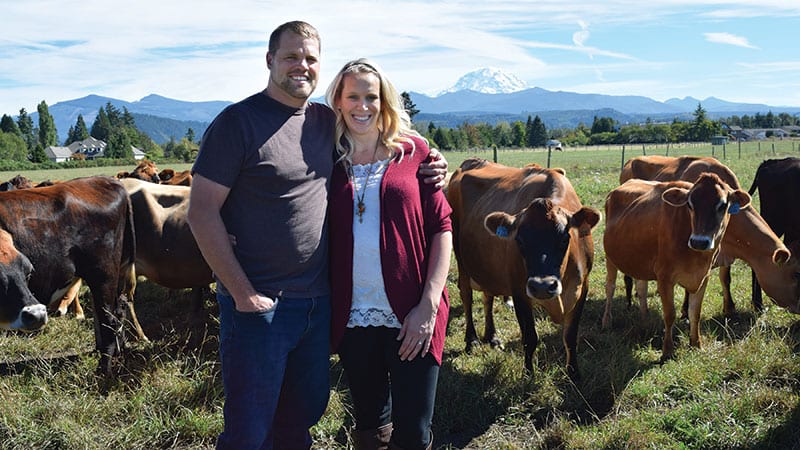 Normally, organic dairy farmers have other things to do with their time than discuss the rules that support the organic label—things like making sure their cows are brought in from the pasture and milked. This year, however, organic dairy farmers and many advocacy groups and affiliates made the trip to the National Organic Standards Board (NOSB) meeting in Seattle to testify about a problem that may take away their ability to focus on the farm, even stay on the farm. What is the problem? To put it simply: how an organic cow becomes and stays organic.

You see, in 1990, when the national law was passed that created the National Organic Program (NOP) and a little later when the organic regulations were finalized, there weren’t a lot of organically raised cows. To encourage the transition of conventional dairy cows to becoming organically raised, the regulations allowed farmers to take a non-organic cow and transition it to organic through a one-year process. After this one-time transition, the regulations were pretty clear (or at least most of us thought they were clear) that to keep your organic certification and label your milk as organic, all cows going forward had to be raised according to organic standards from the last third of gestation.

Enter the success of the organic program over the past three decades. For most organic farmers, especially dairy, there were financial benefits to making the transition to organic that supported the increased costs and effort of raising organic livestock and producing organic milk. But a few years back an issue arose—there was too much organic milk and it was being sold at a cost that did not add up. It came to light that not all organic dairy farmers were operating under the same set of rules. Instead of the one-time transition and then continued organic management, some certifiers were allowing farmers to continually transition non-organic cows into organic, a cheaper process that allowed them to avoid the costs of raising a calf as fully organic.

The organic community came together and realized this issue threatened not only the farmers, but also the integrity of the organic label. The fix seemed simple—tell the U.S. Department of Agriculture (USDA) to enforce the one-time transition. But according to USDA, the fix was more complicated because the rules that spelled out how farmers could transition organic cows and what certifiers could enforce had, for lack of a better analogy, a gap in the fence. This meant that to fix the problem the gap had to be mended and a new rule needed to be put through “rulemaking”—a long and tedious process that requires many levels of administrative review and public comment, often taking two years or more.

Despite this bureaucratic hurdle, USDA did get to work and in 2015 issued a proposed rule that was shaped and agreed upon by the organic community through the rulemaking process. The rule wasn’t perfect, but it did mend the hole in the fence—curbing potential fraudulent behavior and oversupply in the organic dairy market; and, more importantly, guaranteeing that consumers would get what they have been promised. It had at the time—and still has—almost unanimous support throughout the organic dairy community.

For organic farmers there was hope that beyond better prices and support of the family farm, there was a model of the bureaucratic system and organic system working to support the needs and expectations of organic farmers and consumers alike.

Unfortunately, nearly four years later for many organic dairy farmers this hope has been dashed and the gaping hole in the regulatory fence remains because the “Origin of Livestock” rule sits idle.

“This lack of movement and enforcement by the USDA has opened the door for a few to tarnish the reputation of the whole and put many organic farmers in the dire situation of potentially losing our farms,” Ryan Mensonides, an organic dairy and PCC Farmland Trust farmer, commented.

And this was precisely why several organic dairy farmers living in Washington took time away from their farms and made the trek to Seattle to let the NOSB, NOP and organic community know that they did not have time to wait. The Origin of Livestock Rule needs to be finalized. Now.

“It is paramount to understand that there is no stronger advocate for the integrity of the organic market than the organic farmers themselves. We believe in this way of life and want only the best for our consumer,” emphasizes Mensonides. “This is why we continually advocate for stronger rules and enforcement from the NOP.”

Unfortunately, the experience of organic farmers making the trek to Seattle and other organic advocates seemed to fall on stubborn ears with the NOP offering no reassurance that the needed action of finalizing the existing proposed rule would be taking place. But the voice of the organic community is strong and there is still time. PCC and the National Organic Coalition have raised this issue in their work in D.C. and before the NOSB. We are also working to evaluate our dairy suppliers and develop internal assessments on organic dairy livestock sourcing and transitioning practices.

Consumers can help too by reaching out to their elected officials and putting pressure on the USDA and the rest of the administration to stop stalling, pick up their tools—today—and fix the fence.