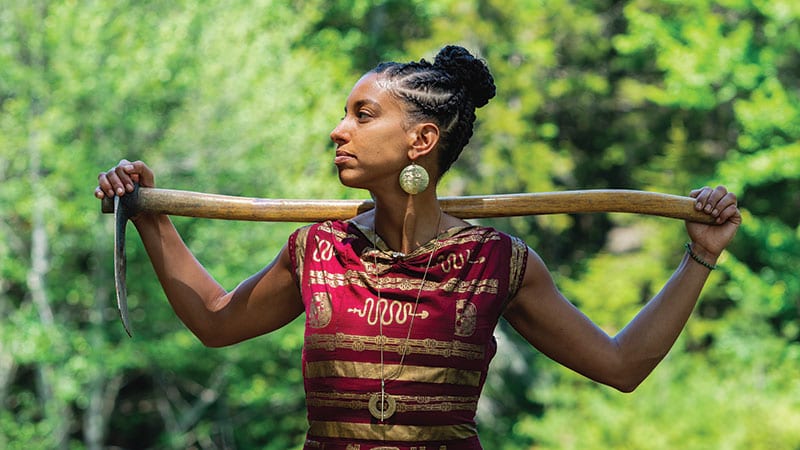 Black farmers make up just 1.3% of U.S. producers, according to the latest U.S. Department of Agriculture census, down from around 14% in 1920. That number is tied to a long-documented history of government discrimination, to land lost in the Great Migration, and to countless other factors. Leah Penniman is a powerful force against that disparity, co-founding a flourishing farm collective, training new farmers of color, and inspiring people of all backgrounds to work toward equality in agriculture.

As young parents, Leah Penniman and her husband lived far from a grocery store or garden plot, in a neighborhood where “the corner store specialized in Doritos and Coke.” They signed up for a CSA vegetable share, straining their budget and walking miles for each weekly pickup with a toddler in the stroller and a newborn in a backpack.

Penniman, a full-time science teacher at that point, had years of experience farming and found it profoundly fulfilling. Despite her experience and the neighborhood’s need, though, it didn’t seem like a career path for a black woman committed to social justice.

“I’d been farming since I was 16. I read all the books I could get my hands on, I went to all the conferences… I really thought that sustainable farming was created by white men,” she said in a phone interview.

After all, that’s who she’d seen as the textbook authors, the conference speakers, the faces filling nearly every gathering of organic farmers. Images of black people on the land were connected to slavery and sharecropping, not expertise and ecological stewardship.

Then she began researching, and a different history emerged.

As Penniman wrote in her recent book, “Farming While Black,” (Chelsea Green Publishing, $34.95), she traced connections between black farmers and nearly every sustainable farming concept, from regenerative agriculture to community land trusts.

She recovered hidden heroes such as Tuskegee Institute professor Booker T. Whatley, one of the “original thinkers” behind CSAs, and civil rights leader Fannie Lou Hamer, who founded a 1,500-family farm co-op in the Mississippi Delta. Stories stretched back to the ancestors who braided seeds in their hair before they were kidnapped onto slave ships, “believing against the odds in a future of sovereignty on land.”

With that inspiration, in the years since those dusty CSA walks, Penniman and husband Jonah Vitale-Wolff co-founded Soul Fire Farm near their old home in upstate New York. It’s an area of what Penniman calls “food apartheid” rather than a food desert, reflecting a situation created by humans rather than shaped by nature. 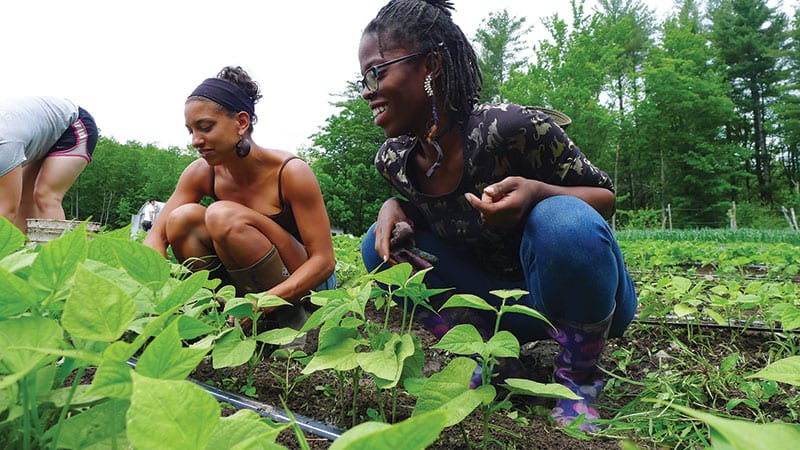 Slowly, their team transformed a few acres of painfully starved hardpan ground into rich topsoil and generous harvests. The Certified Naturally Grown farm (a certification program based largely on the U.S. Department of Agriculture organic program) serves the people most at need in their community, “in the spirit of ujamaa, or cooperative economics,” as the website puts it. Their efforts include offering CSAs on a sliding scale that subsidizes free subscriptions for those most in need and accepting EBT payments (formerly known as food stamps). Soul Fire delivers weekly boxes of fresh produce directly to homes, eliminating another barrier to good nutrition for those who don’t have easy transportation or extra time.

The farm has become a verdant source of kale and callaloo (amaranth), tomatoes and tomatillos, butterball potatoes and cherry bomb chile peppers. More than that, it’s evolved into a training ground for new BIPOC (black, indigenous, people of color) farmers, both a practical and spiritual incubator.

Thousands of people have completed Soul Fire farming programs, learning hands-on skills and a healing connection to the land.

“It matters to know that roselle is from Senegal, and that the Geechee red pea is an essential ingredient in the Gullah dish known as Hoppin’ John. In keeping the stories of our seeds alive, we keep the craft of our ancestors alive in our hearts,” Penniman wrote.

They’ve learned from current practices as well as history; sister farms in regions like Haiti have shared practices as basic as using a shorter, heavier farming hoe that’s better-suited to small farms. (Penniman wrestles a few into her checked baggage to bring home each trip.)

“I’ve learned a lot about farming and it’s been a beautiful exchange. I think it’s important to do work beyond the so-called borders of the U.S.,” Penniman said. With some 75% of the world’s food still grown by peasant farmers, she said, those farmers are “the experts in sustainable agriculture and how to feed the community in a way that’s healthy and doesn’t deplete natural resources.”

“We didn’t know what the vision was when we started out. Nobody could have told us we would be doing what we’re doing, it was really one step at a time…” Penniman said.

“It’s been so inspiring to see the alumni of our program going on to join or start land-based projects that make a big difference.”

Her own work now stretches far beyond Soul Fire’s borders. Yet, while she’s no longer the day-to-day farm manager, she had to keep her own connection to the land. “I felt a lot of longing (and asked), ‘Can I have a piece of the farm I’m in charge of?’” she said. “I take care of the fruit trees and berries and herbs. That’s been a very important anchor for me…”

“What keeps me going is the fact I have this really deep, sacred, intimate connection with the Earth. I have to be able to listen to what she’s telling me to do.”

People entering the field now, at least, have the book that Penniman wishes she’d had herself. Adding another quiet layer of support, the book’s profits go toward a fund for black farmers. “I feel like Farming While Black is really our book as a community. It’s not my book as an author,” she said.

For a broader audience, it’s also an education and a history lesson. It includes ways people from a European background can challenge an inherently biased system, ranging from legislative polices they could support to a reparations map connecting farming projects that need support with people who have resources to share.

After all, “Black and brown people didn’t create the situation we’re in, and it’s on all of us to heal and repair it…” she said.

Ways to make change are as diverse as people are.

“We all need to find the overlap: What makes us come alive, what does the world need, what is our skill set? We should work together to create the quilt of solutions that we need.”

More resources and ways to get involved are online at soulfirefarm.org.

Nourishing children through the summer slide