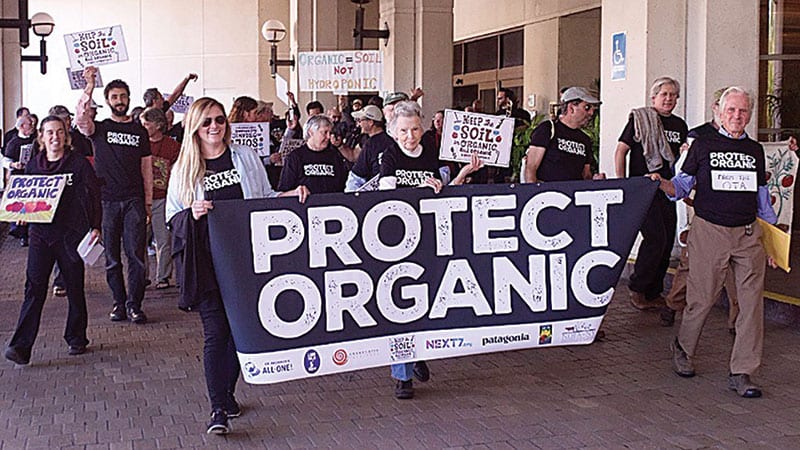 Rally to Protect Organic in Jacksonville. Photo courtesy of The Real Organic Project.

With the Seattle National Organic Standards Board (NOSB) meeting just around the corner, it is time to start thinking about making our voices heard for organic standards and organic integrity.

PCC Community Markets has a long history of fighting for the integrity of the organic label, providing comments to the NOSB on work agenda items, and making recommendations on issues of concern that the NOSB needs to address.

The last time the NOSB meeting was held in Seattle, in 2011, PCC Public Affairs and Quality Standards Director, Trudy Bialic, wrote in Sound Consumer, “The meeting represents a remarkable process — grassroots democracy in action — completely transparent. Anyone with a suggestion or complaint about organic standards can sign up to testify.” This still is true today.

The public-private relationship offers one of the only opportunities for consumers to provide direct input into food and agricultural standards.

The NOSB releases its agenda with topics for the Seattle meeting after press time. There are, however, several long-standing priority issues for PCC summarized below.

If you read your February 2019 issue of the Sound Consumer, you know fracking brings many environmental risks that threaten farmer livelihoods. Without protective Organic Agriculture Impact Mitigation Plans in place, compacted soil, spills at the drilling site, faulty pipelines, and chemicals used in fracking fluid can contaminate drinking and irrigation water and threaten organic certification.

We need your help to support our request that the U.S. Department of Agriculture (USDA) allow the NOSB to discuss the impacts of oil and gas fracking on farms.

To read more about PCC’s concerns about fracking, see our comments to the NOSB, here and here.

Hydroponics is not on the NOSB agenda, but certifying hydroponics as organic remains highly contested.

In 2010 the NOSB voted to disallow hydroponic agriculture to be certified organic, saying the Organic Food Production Act requires plants to be grown in soil with the focus on enhancing soil fertility. In 2016 the NOSB reaffirmed this position, saying plants grown with most nutrients supplied by a liquid do not meet the letter or spirit of the law.

PCC has asked the NOSB to recommend that hydroponic systems are not consistent with organic principles. See the Sound Consumer article “Should hydroponic production be certified organic?”.

We believe as long as hydroponics continue to be allowed to be sold as organic — without specific criteria or standards — the NOSB should recommend mandatory labeling.

Join us in telling the NOSB and NOP we want transparency and full disclosure in how food is grown.

Bisphenol A in packaging

In 2014 the NOP initiated the topic of bisphenol A (BPA) in food packaging on the NOSB Work Agenda.

As of the spring 2017 meeting, it appeared this agenda item was moving forward in a discussion document. As of fall 2018, however, this item was placed “on hold.”

NOP Deputy Administrator, Jennifer Tucker, was asked why we weren’t seeing this agenda item move forward. Her response can be found in the meeting transcript, noting the NOP initiated the agenda item and now is “deprioritizing” it, saying it is “not as important a priority as some of the other topics, such as [preventing fraud in] imports.”

“Hundreds of scientific studies have linked extremely small amounts of BPA, measured in parts per billion and even parts per trillion, to an increased risk of breast and prostate cancer, infertility, type-2 diabetes, obesity, asthma and behavioral changes, including attention deficit disorder. The data indicates people are exposed to BPA from canned foods at levels that are compromising our health.

“Research demonstrates that removing BPA from food packaging significantly reduces the levels of BPA in people.”

If getting BPA out of packaging is a priority for you, please speak up at the NOSB’s April meeting.

PCC has heard from many members and shoppers over the years opposed to the pervasive use of “natural flavors” in organic foods. Based on your feedback, we believe organic shoppers want only certified organic flavors to be allowed in organic food.

“Natural” and “artificial” flavors are not as different as labels suggest. The distinction is based more on how a flavor is made than on what it contains. For more, see Comments to NOSB on petitions and motions.

The Food and Drug Administration allows manufacturers to conceal their production of flavors as Confidential Business Information. Companies can keep formulas secret and hide that they’re produced in ways or with substances they don’t wish to disclose.

In 1995 the NOSB plan said manufacturers should document their progress toward wholly organic natural flavors.

If you’d like the NOSB to set a deadline for ending the allowance for “natural flavors” in organic foods and allow only organic flavor additives in organic food, we encourage you to tell the NOSB.

Silver dihydrogen citrate is a material that will be voted on at the upcoming NOSB meeting. This material raises concerns for several reasons.

Although the petition does not mention nanotechnology, nanosilver produced with nanotechnology would be allowed should this petition be approved without an annotation to exclude it.

The NOSB voted to exclude engineered nanomaterials in 2010 but the NOP has ignored that vote.

Silver is an antimicrobial with medical uses. It is important to avoid unnecessary use that could lead to resistance.

As a consumer-driven industry, organic has been growing faster than any other sector of the food industry. The importance of having our voices heard on organic integrity is greater than ever.

We invite you to join us at the upcoming NOSB meeting in Seattle.

This article represents a small portion of issues of importance to the integrity of the organic seal. To learn more, find the full NOSB Work Agenda here.

Christie Badger has been a National Organic Coalition (NOC) consultant since 2015, working to facilitate NOC’s NOSB work. She facilitates standards discussions, conducts research, and helps to write and deliver comments for the NOSB meeting. As an independent organic inspector, Badger specializes in inspecting dairies and poultry, as well as consulting with transitioning operations.