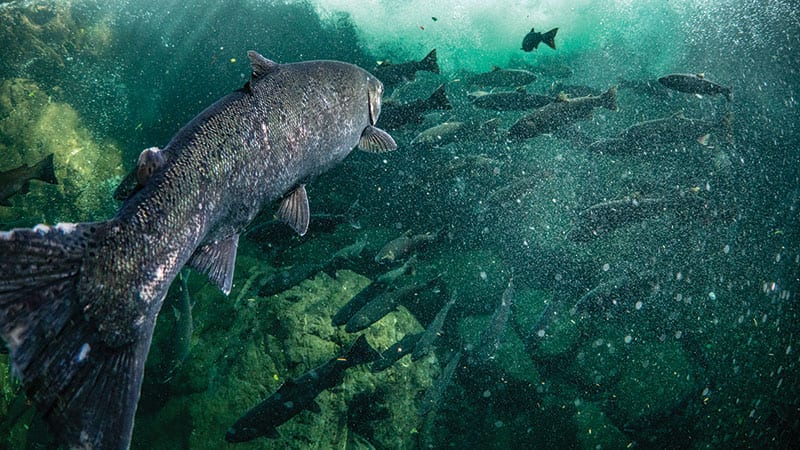 Coho are a species of concern in Washington waters that recovery managers are monitoring closely.
Photo credit: ©Jason Ching, jasonsching.com.

Can you guess what fish will survive the annual race to migrate through Puget Sound? Thanks to tracking technology and an online competition, you can pick your own real fish this year and trace its attempts to travel from freshwater streams to the Pacific Ocean.

Survive the Sound is an education and outreach campaign that uses fish tracking data to bring excitement, education and some teamwork to a movement to save salmon for our community and endangered orcas.

The free online game features data collected through a high-tech acoustic tracking network in Puget Sound. Researchers surgically implant fish with devices that emit a unique “ping” that can be tracked using an expansive network of underwater listening receivers. Researchers follow steelhead in this case rather than salmon because the tracking devices are too big for small salmon. (Steelhead, adopted as the official Washington state fish in 1969, are rainbow trout that migrate to saltwater similarly to salmon.) 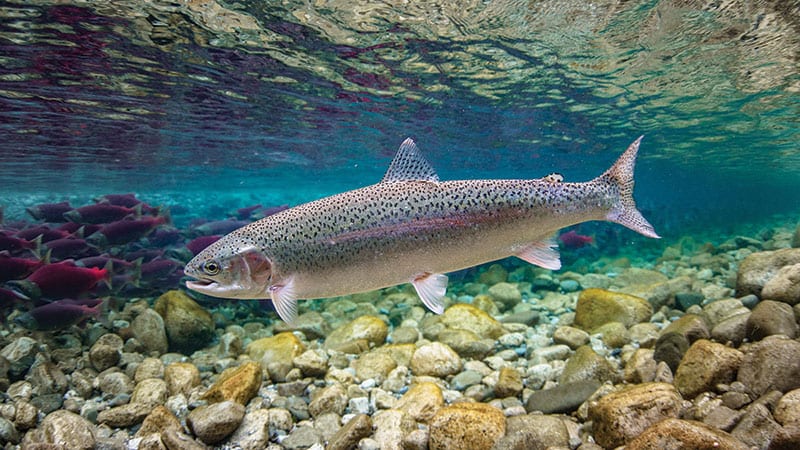 Long Live the Kings, a 33-year-old local salmon recovery nonprofit, created Survive the Sound to share its research on the low survival rates experienced by juvenile salmon and steelhead migrating through Puget Sound. Battling pollution, predators, migration barriers and other dangers, as few as 15 percent of the juveniles in some fish populations survive the journey from their natal stream to the Pacific Ocean. Understanding this problem could be the missing link to salmon recovery.

Long Live the Kings, along with Canada’s Pacific Salmon Foundation, is leading one of the largest international research endeavors of its kind: the Salish Sea Marine Survival Project. Through the project, more than 150 researchers are studying the fish at more than 100 research sites around Puget Sound and the Strait of Georgia, developing new technologies to learn about their fates, such as when a seal eats a specific fish.

Sign up by May 5 at Survivethesound.org for the game, a simulation using data from 48 of the 500 or so tagged steelhead, who typically leave their rivers between April and June and take two to three weeks to reach the ocean.

Over the game’s five-day version of the migration, you’ll learn more about these miraculous fish and get updates on your fish’s progress. Building a team with family, friends or co-workers will increase your odds of having the most surviving fish by the end. (You can share experiences and spread the word by talking about #survivethesound on social media.)

Schools can participate too, and the website includes a toolkit of activities and resources for educators to strengthen students’ “Salmon 101” knowledge and extend learning opportunities. An educator who participated in 2018 remarked, “I have no doubt that Survive the Sound will be one of their most vivid memories of second grade.”

This spring will mark the third year of Survive the Sound and coincides with International Year of the Salmon. To save these Pacific Northwest icons, salmon and orcas, we’ll need everyone’s help. We hope to see you all in the race!

Lucas Hall is a project manager with Long Live the Kings.