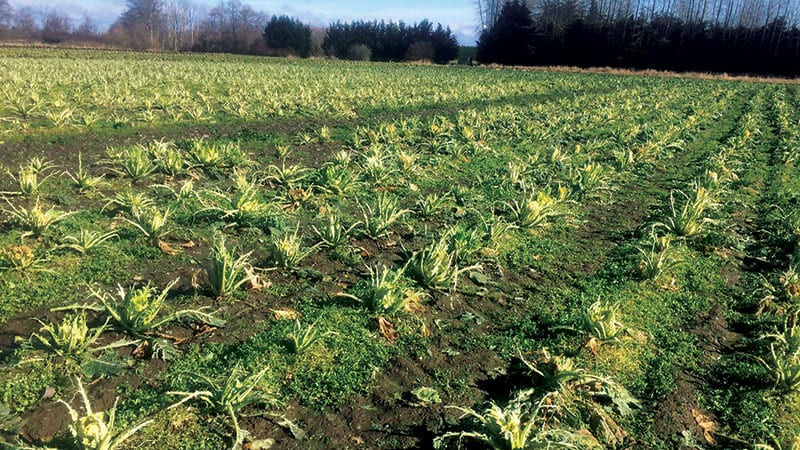 The wrapper leaves of Nash’s Italian pearl cauliflower were eaten, exposing the cauliflower to the sun, which causes it to decay quickly.

Treasured PCC supplier, Nash’s Organic Produce in Sequim, Washington, lost one of its most important crops recently — destroyed by migrating waterfowl, driven to consume a crop they don’t particularly like but were starving.

On Tuesday, February 12, Mike Castle, vegetable production manager at Nash’s Organic Produce, went to one of the fields in Dungeness to check on spring crops because the area had received about 15 inches in one continuous snowfall. Everything looked fine, but he decided to come back in a couple of days because he was concerned about possible damage from the cold.

The following Friday morning, he returned and was shocked to find that the entire 10-acre field had been damaged severely by migrating waterfowl.

Trumpeter swans, Canada geese, and a variety of ducks had discovered the purple sprouting broccoli (PSB), spring cauliflower, and kale when the broccoli heads peeked out of the snow as it began to melt. The birds couldn’t reach other food in other fields under the snow, so they proceeded to eat all the PSB leaves, leaving only stems and plants that cannot recover. Without their leaves, the plants cannot collect sunlight for growth.

Ducks always are plentiful in Dungeness, but the trumpeter swan population has grown to several hundred and, in the past, they have eaten Nash’s carrots right out of the ground. They arrive in the Sequim-Dungeness Valley in mid-November, so the farm has found a partial solution — harvest the carrots before the swans arrive and put them in cold storage.

The best way to store carrots is to leave them in the ground where they get sweeter because they can collect more minerals from the soil. But the swans leave us little choice. It’s risky because there will be some loss — but a good portion of the crop can be saved.

However, PSB, a very popular spring vegetable, is ready to harvest in late February. Nash’s never has had any swan damage before because our winters have not been so severe and the swans either found preferred food elsewhere, or they already had migrated further north. Not this year.

Growing any crop is a risk, especially in times of extreme weather. Actually, a good snowfall can protect brassicae plants (cabbage, broccoli, cauliflower, etc.) from freezing. Snow acts like insulation for the plants and many crops come through a heavy snowfall with some freeze damage but are able to bounce back in good shape when the warmth returns. But they cannot recover from the loss of their leaves.

Additionally, Nash Huber and his crew have put years of breeding effort into PSB, selecting the plants that prove to be disease- and cold-resistant to plant the next year. That work is delayed now.

The birds also ate the leaves off a special seed crop of Italian cauliflower that Nash has been developing over 12 years from seed he got from a farmer in Turin, Italy. It will be planted again, but a couple of years’ work has been lost there, too.

The monetary loss for this year also will be high and difficult to recover. “Spring always is our most challenging time,” says Farmer Nash, “because we are prepping soil, purchasing seed, and doing work in the greenhouses. It is a time when incoming revenue is small due to lack of product but expenses are great because of labor needs and things like diesel consumption. The PSB,” he says, “always was a buffer for us at this time of year, enabling us to have a little variety at our farmers markets and even do some wholesale. This loss is significant and will affect us throughout the year.”

One of the biggest concerns after such a great culinary experience is that these migrating birds will return to feed in Nash’s fields again next year if the area gets another severe snowstorm. 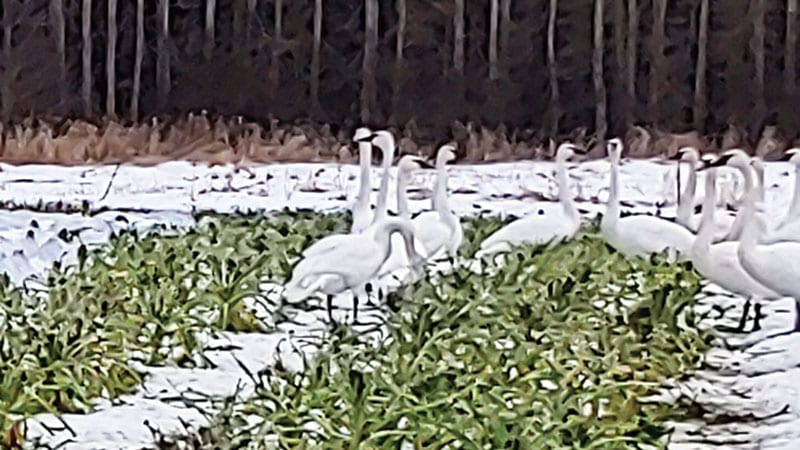 A few trumpeter swans continued to return to the PSB field until other fields opened up for them to forage.

Since they are protected by the Migrating Bird Treaty Act of 1918, there are questions about whether or not the farm can haze them. Certainly, no one wants to injure or kill them. These birds only do what they do to survive and, in this case, they were forced to find food wherever they could. Most people, including Nash and his crew, think they are beautiful and deserve to be here.

It is the farm’s belief, because the birds never disturbed the PSB crop before, that they actually do not like the taste of it and, under normal circumstances, they would not have eaten it. But circumstances were not normal this winter.

The last time anyone here can remember such a heavy snowfall in the Sequim area was 1989. Local farmers have been more concerned that climate change would cause less snowfall and that we eventually would have to deal with drought conditions. This winter took everyone by surprise.

Nash Huber has farmed all his life and is very aware that agriculture is a risky business, which is why organic farmers try to be as diverse as possible. But as the Sequim-Dungeness Valley develops as a residential and retirement community, migrating waterfowl have fewer and fewer places to rest and forage. They concentrate on the remaining fields and can do tremendous damage to farms, as we see every year in the Skagit Valley.

It’s a very difficult pill for any farmer to swallow and the effects will extend into the future like ripples on a pond. But because diversity has been built into Nash’s organic systems, this crisis will pass and we will incorporate its lessons so hopefully it will not be repeated.

The damage is estimated at more than $100,000. Visit nashsorganicproduce.com for updates on how the farm will address the loss.

Patty McManus-Huber is the wife of farmer Nash Huber and co-owner of Nash’s Organic Produce and Nash’s Farm Store in Dungeness, Washington. She works with the farm’s laying hen flock and also writes the farm’s weekly newsletter. For further information see nashsorganicproduce.com. Nash and his farm also inspired the creation of the PCC Farmland Trust.