This article was originally published in October 2017 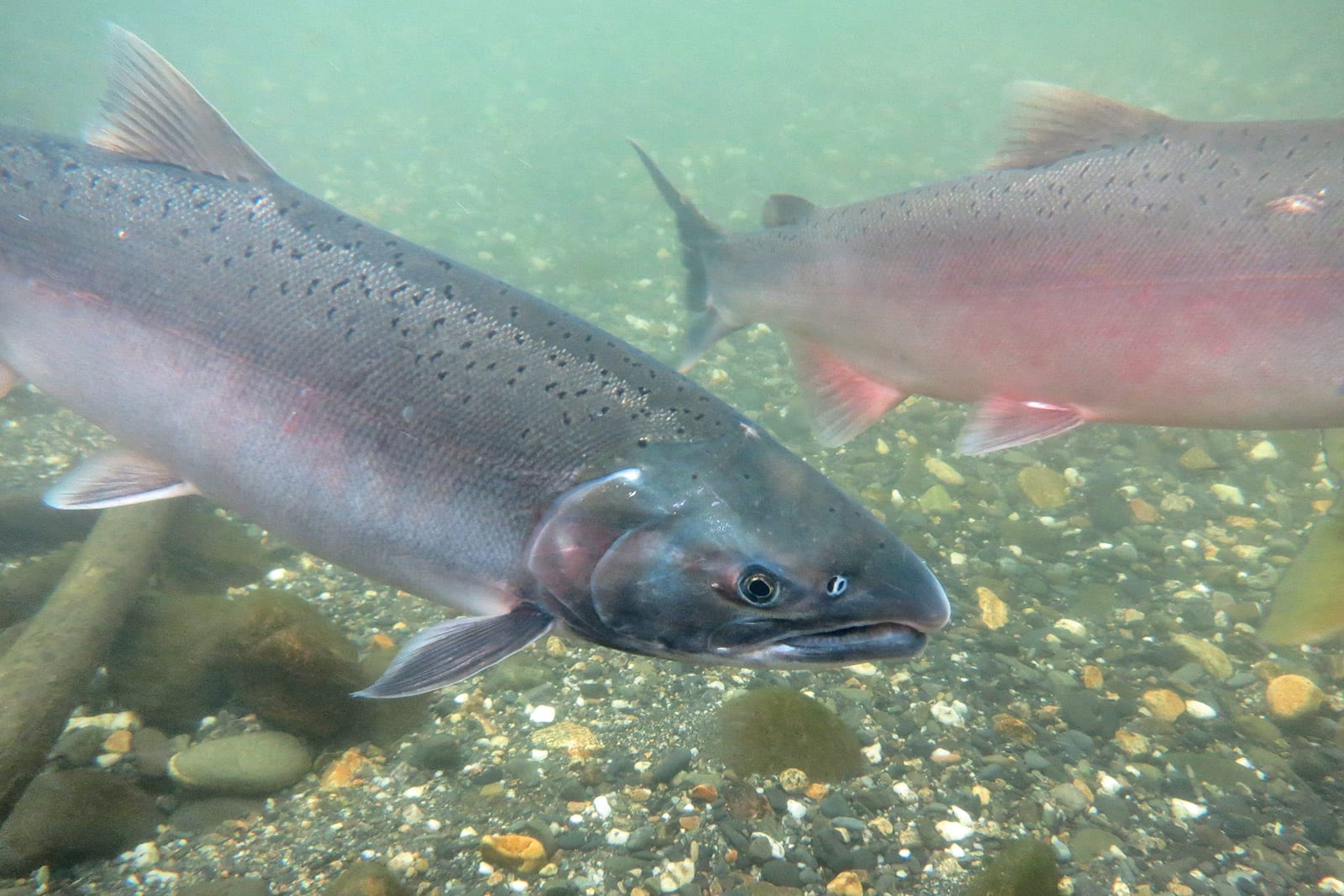 PCC sells only wild salmon in support of a healthy marine ecosystem and family fishing businesses.

The only good outcome of the massive escape of Atlantic salmon from net pens near Cypress Island is that residents, state agencies, and politicians finally may be awakened to why marine feedlots must be banned from public waters.

Washington is the only U.S. state on the West Coast that allows Atlantic salmon farming in net pens — despite the threats of invasive, non-native fish and the pathogens, parasites and pollution flushing from net-pen cages. Large-scale escapes have occurred here before: more than 613,000 Atlantic salmon escaped from net pens into state waters from 1996 to 1999.

Atlantic salmon are listed as invasive by Washington’s Invasive Species Council. The Washington Department of Natural Resources refers to them as a “pollutant” under Clean Water laws.

History has demonstrated repeatedly that open-water net pens are incapable of confining fish but the industry has not been required to relocate to closed containment operations. Instead, some state agencies and the National Oceanic and Atmospheric Administration (NOAA) are pressing for expansion. NOAA and the Canadian-based company that owns the salmon farming industry in Washington state, Cooke Aquaculture, are targeting the Strait of Juan de Fuca for new operations.

Lummi Nation, the third largest tribe in Washington state, declared a state of emergency from the August spill, a necessary step in alerting state agencies and bringing resources to bear. Lummi fishermen have caught thousands of the invasive fish but officials reportedly believe many are on their way to spawn in local rivers.

A NOAA researcher downplayed the risks in a recent Seattle Times report, saying Atlantic salmon “doesn’t last very long” in the wild. Yet the Washington Department of Fish and Wildlife (WDFW) has not required reporting of Atlantic salmon on catch cards, until this latest catastrophe.

The fish farm industry self-reports escapes and WDFW records showed no escapes for many years — even as commercial and recreational fishers caught alien Atlantic salmon locally and as far away as the Copper River in Alaska and the Bering Sea. In recent surveys of 41 Vancouver Island rivers, 36.6 percent had populations of Atlantic salmon that were reproducing in some locations.

“This disaster could have devastating effects and could potentially decimate this year’s run of Chinook salmon,” Lummi Natural Resources Director Merle Jefferson told Indian Country Today. “This is unacceptable for all residents of the Puget Sound. We are doing what we can to help limit the damage but as far as we know, containment is indefinite. These invasive fish are going to find our rivers.”

The tribes have warned of such a catastrophe for years. “The wild stocks already are endangered,” Brian Cladoosby, chairman of the Swinomish Indian Tribal Community, told the Seattle Times. “It is time to shut these operations down. Period. These fish are headed to every river in Puget Sound. We have been saying all along it was not a question of if, but when this would happen.”

Environmental groups in British Columbia also have warned that Atlantic salmon farms could devastate some of the largest wild Pacific salmon runs in the world. Watershed Watch Salmon Society, an environmental organization based in B.C., calls the latest spill “an epic disaster.”

Atlantic salmon are territorial and socially dominant, competing for space and food. When swimming or colonizing rivers, they threaten endangered wild fish already at risk for extinction. Their aggressiveness can disrupt the spawning behaviors of native salmon species, causing stress, inhibited growth, even death.

At press time, the Quinault Indian Nation also was quoted by Indian Country Today as saying the state’s hold on new permits for more net-pen Atlantic salmon is a start but not enough to recognize the threats from Atlantic salmon, which they say is being done with profit rather than health in mind.

“We have been objecting to the open-water farming of Atlantic salmon for years,” said Quinault Nation President Fawn Sharp in a statement.

Marine farms producing non-native fish, aided by federal and state agencies, replicate some of the worst practices of factory farming in the marine environment. Potential impacts on small and tribal fishing businesses, and marine and river ecosystems have been ignored in the push to encourage corporations to privatize the profits and externalize the risks.

Industrial aquaculture occurs mostly under the waterline and out of sight, so impacts are easily ignored while the regulatory process favors expansion.

The farmed salmon industry pays nothing for the service. Impacts of pesticides, antibiotics and other chemicals to control disease and parasites in a crowded pen aren’t counted. When sending a diver to examine the area under the pens near Bainbridge Island, a Department of Ecology diver reported, “The old-growth kelp forests are dead.” Meanwhile, Seattle’s sewage treatment plant cost $573 million to build and $80 million annually to operate and release treated solids.

Washington spends millions of dollars each year to save wild salmon and restore Puget Sound. Yet the state has allowed — even encouraged — private businesses to spoil that investment. Please join us in asking the state to declare solidarity with other West Coast states and prohibit Atlantic salmon net-pen farms.

On Sept. 13, PCC celebrated an important milestone. We changed our name from PCC Natural Markets to PCC Community Markets.

PCC Board of Trustees Report, October 2017

There are so many reasons to celebrate food in October! Not only is it the peak of harvest season in the Pacific Northwest but it also is designated Fair Trade Month, Co-op Month, and Non-GMO Month!