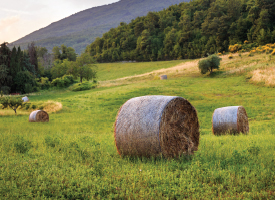 Grass-fed beef sales are growing at an annual rate of 25 to 30 percent. Sales of grass-fed yogurt and kefir have in the last year increased by more than 38 percent, compared with a drop of just under 1 percent in the total yogurt and kefir market, according to natural and organic market research company SPINS.

Overall changes in the American diet between 2005 and 2014 reduced greenhouse gas emissions that contribute to climate change by the equivalent of pollution from 57 million cars — despite population growth of about 9 percent, according to a report by the Natural Resources Defense Council. Americans ate 19 percent less beef from 2005 to 2014. Pork and chicken consumption also fell, though less drastically. Americans ate more cheese, butter and leafy greens.

Clif Bar & Company has received the 2017 Climate Leadership Award for Supply Chain Efforts from the U.S. Environmental Protection Agency. The award recognizes organizations that demonstrate leadership in managing and reducing greenhouse gas emissions in internal operations and throughout the supply chain, as well as integrating climate resilience into their operating strategies. Clif Bar’s innovative green power program, called “50/50 by 2020,” asks supply chain partners to source 50 percent or more green power for the electricity they use on the company’s behalf. Clif Bar also sources 100 percent green power at its Emeryville headquarters, and 80 percent of its electricity is generated by an onsite solar array.

Google reportedly has created the world’s first map of pirate fishing hotspots. It teamed up with the nonprofits Skytruth and Oceana to launch Global Fishing Watch, a free platform for tracking global commercial fishing and mapping transshipping hotspots that likely represent locations where pirate fishing is flourishing when vessels “go dark.” Satellite imaging and location technology used for mapping may prove to be effective weapons against pirate fishing.

About 386,000 Columbia River coho salmon are projected to return this year, which is similar to last year’s forecast. Only 223,000 coho actually returned last year to the Columbia River, where some coho stocks are listed for protection under the federal Endangered Species Act. About 582,600 fall chinook salmon are expected to return to the Columbia River, which is similar to last year’s actual return. While that’s significantly lower than the record 1.3 million fish that returned in 2015, this year’s forecast is considered a fairly good run of fall chinook. Coho returns to several Puget Sound-area rivers, including the Skagit, are projected to be extremely low.

Learn about the trustee and nominating committee candidates, and how to vote, on our website here. Mail-in ballots must be received at the PCC office by 5 p.m. on June 7. In-store voting is permitted until each store's close of business on June 7.

Learn tips for choosing quality oil, a few of our favorite brands, and details about tastings at our stores this month with PCC nutrition educator Nick Rose.