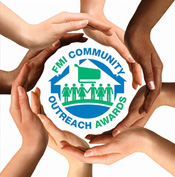 PCC’s program allows shoppers to contribute cash donations and reusable bag rebates to fund the purchase of bulk food, which is repackaged at bimonthly parties at 11 partner food banks. More than 1.3 million pounds of food have been distributed since the program began — 72,000 pounds in 2013 alone.

The FMI awards recognize creative, charitable programs established and carried out by food retailers to enhance the lives of those in the communities they serve. PCC was one of six retailers to win an award.

David Fikes, FMI’s vice president of communications and consumer affairs, said, “These programs serve as vivid reminders that the longstanding tradition of the neighborhood supermarket enriching the life of its community is alive and well.”

USDA report: ongoing GE concerns
A new report from the U.S. Department of Agriculture says after more than 15 years on the market, genetically engineered (GE) seeds have not been proven to increase yields. USDA’s Economic Research Service (ERS) says, “in fact, the yields of herbicide-tolerant or insect-resistant seeds may be occasionally lower than the yields of conventional varieties.”

The report states several researchers also found “no significant differences” between net returns to farmers who use GE herbicide-tolerant seeds and those who use traditional, non-GE seeds.

The emerging field of epigenetics tells us our genes are influenced by diet and environment.

From all-purpose tile cleaners to phosphate-free dish detergents, PCC carries cleaning products that are safer for you and the environment.