Like movie previews, food labels tell us what’s inside packages. Looking for organic, country-of-origin, or gluten-free? Read the label.

You also can find non-genetically modified organism (GMO) labels, verified by the Non-GMO Project, on some foods.

But if we’re looking for genetically engineered (GE) ingredients identified on the label, we’ll have to wait. The food industry has a history of resisting transparency through mandatory labels. Label changes often are forged only after years of consumer pressure, industry arguments and legislation. 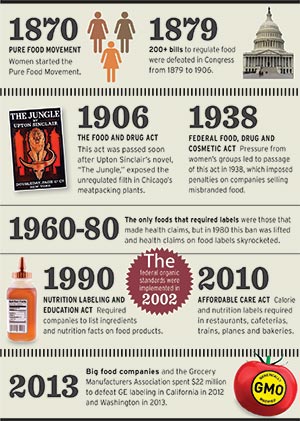 Imagine a time when a jar of tomatoes might not have contained any tomatoes. After the Civil War, the U.S. Department of Agriculture (USDA) was new, and cans, cardboard boxes and graphic labels recently had been invented.

Chemical preservatives and toxic colors were unregulated. Lead added color to cheese. Cottonseed oil passed for olive oil. Chalk adulterated flour, and Plaster of Paris might have lurked in mashed potatoes. People couldn’t be sure if coffee and tea were real.

Under the newly created USDA, scientists in the Division of Chemistry, forerunner of the Food and Drug Administration (FDA), investigated food safety. Chief chemist Harvey Wiley tested foods and investigated additives for purity and safety. Wiley lectured at women’s clubs and business organizations across the country. He spoke out against adulterated foods and advocated changes in food laws.

Fueled by Wiley’s lectures, women started the Pure Food Movement in the 1870s. They wrote letters to state legislatures and sent petitions to Congress to prevent adulterated foods. States passed a variety of food laws, but they were inconsistent.

Powerful industry lobbies formed. More than 200 bills to regulate food were defeated in Congress from 1879 to 1906. According to FDA historian Wallace F. Janssen, when Upton Sinclair’s novel, “The Jungle,” exposed the unregulated filth in Chicago’s meatpacking plants, public opinion shifted and the Food and Drug Act of 1906 was passed.

Food inspectors were appointed, labs set up, and the government could take companies to court over adulterated foods. But the law had specified only that food labels must be honest and, if the label included ingredients, they must be truthful.

Fines of up to $500 or one year imprisonment could be imposed, but judges could not agree on “standards of purity” for foods. Deceptive foods thrived. Jams had no requirement for fruit content and many were little more than glucose, water, grass seed and artificial flavoring.

Wiley wanted to regulate food identity and quality, and fill-of-container standards (how full the container is and how it is measured). But industry and advertising’s opposition to the Food and Drug Act was so overwhelming, it took 32 years and pressure from women’s groups again to pass the Federal Food, Drug and Cosmetic Act (FD & C Act) in 1938. The law was signed by President Franklin Roosevelt only after an untested drug, Elixir Sulfanilamide, killed 107 people.

Labels must be truthful

Under the 1938 law, if food had misleading or deceptive packaging, was sold as another food, or didn’t conform to a standard of identity, the food was misbranded and companies could be fined penalties.

Jam and jelly manufacturers argued about the required fruit content. Bread companies debated what was — and wasn’t — allowed for additives. It took more than a decade to mandate a peanut butter standard.

In 1953, when FDA moved from USDA to what is now the Department of Health and Human Services, it became more consumer-oriented, while USDA became more industry-oriented. By 1957 many foods had FDA standards.

Discussions about requiring companies to list product ingredients filtered through state legislatures from the 1960s through the ’80s. At the time, the only foods that required labels were those that made health claims.

Most of the food industry resisted compulsory labels, according to Warren Belasco, author of “Appetite for Change.” A General Mills spokesperson insisted ingredient lists would take away from the company’s recipe space.

Health claims on food labels skyrocketed during the 1980s. While the 1906 and 1938 laws had prohibited health claims, the 81-year ban was lifted during the Reagan administration. Without regulation, labels proliferated, claiming foods could reduce cholesterol, promote heart health or ease digestion.

FDA wanted to limit health assertions but judges couldn’t agree on limits for claims, according to The New York Times. By 1989, 40 percent of new food products “contained a health message of one kind or another,” according to Marion Nestle in “Food Politics.”

Congress finally passed the Nutrition Labeling and Education Act (NLEA) in 1990 and President Bush signed it into law. It required companies to list ingredients and nutrition facts. This was the first big change in food labels since the Fair Package and Labeling Act in 1966 required companies to list the correct weight, measure or numerical count for a product, and the manufacturer’s name and address.

FDA said labels should inform consumers and eliminate confusion. Health assertions were allowed only after a scientific review, but according to the Center for Science in the Public Interest, the Bush administration also had a “policy of nonenforcement.”

FDA had wanted to include restaurants under the NLEA but the Bush administration gave in to industry pressure, according to Michele Simon in “Appetite for Profit.” Restaurants had insisted the bill would hurt business and that customers didn’t care about nutrition when eating out.

Calorie and nutrition labels in restaurants, cafeterias, trains, planes, bakeries and delis had to wait until the Affordable Care Act of 2010 mandated that eating establishments (with 20 or more outlets) must list calories and provide nutritional information upon request. Four years later, the restaurant industry still is arguing about the law.

Federal standards for organic labels were on the horizon when Congress passed the Organic Food Production Act (OFPA) in 1990. Twenty-two states already had laws regulating organic foods when the federal law passed, but the laws varied for the growing industry. It took a decade and more than 275,000 comments from consumers to clarify that federal organic standards would exclude irradiation, sewage sludge and genetic engineering from organic agriculture.

The federal organic standards, implemented in 2002, marked the first time that industry and consumers came together to create food standards both sides could agree on. Unlike the vast majority of food labels, the organic label is regulated by USDA, not FDA.

In 1992 a controversial FDA policy declared GE foods were “substantially equivalent” to their natural counterparts and did not require labels. The first GE food, the Flavr Savr tomato, released in 1994, was labeled voluntarily by its maker, Calgene. When shoppers rejected the Flavr Savr because of its lousy flavor, labeling GE foods was no longer done voluntarily.

GE soybeans, corn and canola followed the short-lived Flavr Savr onto the market. By 1999 only 10 percent of U.S. grain elevators separated conventional from GE harvests and, in 2000, StarLink™, a GE corn not approved for human consumption, was discovered in Taco Bell taco shells and hundreds of corn-based foods.

Engineered with pesticide traits, StarLink had been stored in silos in Texas, sold to a subsidiary of PepsiCo in Mexico, had made its way into taco shells, and had been purchased by Kraft for Taco Bell and grocery store foods. To compensate consumers, Kraft was ordered to attach $6 million worth of coupons to taco shells. At a dollar each, the coupons were a small price to pay for the contamination.

According to The New York Times, Aventis, the company that owned the corn, had asked FDA to allow StarLink to work its way through the food system. In 2013 StarLink was discovered in the Saudi Arabian food supply.

A New York Times poll last summer reported 93 percent of the respondents want labels for GE foods. In Oregon, as advocates work to put a GE food labeling initiative on the state ballot, a group of 29 formidable industry groups (the Coalition for Safe Affordable Food) is lobbying on Capitol Hill for a voluntary GE labeling standard.

Big food companies, through the Grocery Manufacturers Association (GMA), continue to fund campaigns to defeat GE labeling. Post-election poll surveys, however, have found that regardless of how voters voted on California’s Prop 37 or Washington’s I-522, 66 percent still want GE foods labeled. Big food succeeded only in convincing voters the bills were flawed.

More than 100 lawsuits are pending over use of just the term “natural” (see the March Sound Consumer).

Maple syrup-makers are in a flap over standardizing maple syrup grades.

The Grocery Manufacturers Association (GMA) continues to claim GE foods are safe, no need to label them. But if history is any indication, when consumers mobilize, public opinion can shift and labels change.