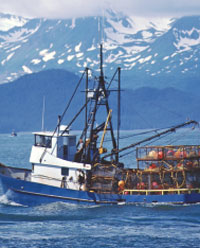 California’s record-breaking drought could have devastating impacts on agriculture. There could be fewer plantings, fewer harvests and lower revenue for crops this year. PCC’s organic citrus and tree-fruit growers in California say they are paying many times more for much less available water this year.

Senator Maria Cantwell, fishermen, chefs and others rallied in Seattle in January to support the protection of Bristol Bay, Alaska, the largest wild salmon fishery in the world, from a proposed mine. The attendees hope the Environmental Protection Agency will decide to use the Clean Water Act as a way to protect Bristol Bay.

Beef has never been more expensive. Cattle futures in the United States scaled all-time highs in 2013 and are predicted to peak in early 2014.

There’s an oversupply of coffee beans globally, which might lead to price slides this year. A U.S. Department of Agriculture report finds stockpiles are expected to rise in many coffee-producing countries, especially Brazil and Vietnam, while demand from coffee-consuming countries remains “relatively flat.” An outbreak of “coffee rust” plant disease in Mexico and Central America may reduce production significantly there, but the decline reportedly will be more than offset by coffee production elsewhere.

West Coast fishermen reportedly could catch as much as 25,000 tons of Dover sole sustainably, yet annual catches the past few years have hovered just above 5,000 tons. One reason: An individual quota management regime enacted in 2011 reduced the size of the groundfish fleet. The boats left focus on higher-value species, such as Petrale sole and Black cod.

PCC Board of Trustees report, March 2014

Shoppers can help save marine mammals

Consumers can play a role in protecting whales, dolphins and sea lions by choosing American-caught seafood. More than 650,000 marine mammals are killed or seriously injured every year in foreign fisheries after being hooked, entangled or trapped in fishing gear.