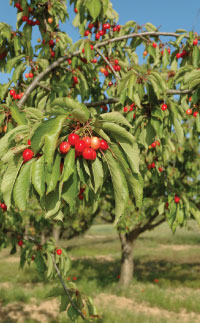 There aren’t as many Northwest cherries this summer, but the ones you see may be plumper because fewer cherries on a tree means the fruit gets fatter. The low volume is due to chilly spring temperatures that hindered pollination and budding.

Worldwide, hundreds of new apple varieties are being bred in search of the next superstar. The competition is fierce as breeders and universities introduce new varieties they hope will gain mass appeal. Previous “competitions” have been won by Gala, Fuji, Braeburn and Honeycrisp — now mainstays in the produce aisle.

The popularity of hummus has spurred the growth of chickpea plantings in Washington. Plantings were up 13.2 percent this year, to 90,000 acres in Washington.

The nation’s aquifers are shrinking at an alarming rate, according to a new study by the U.S. Geological Survey. The problem is not as bad in the Northwest, thanks to an abundance of rivers and streams.

Alaska is forecast to see an increase in salmon catches this summer, from 129 million to 179 million fish. The increase is mostly due to a 73 percent increase in pink salmon. Sockeye and chum harvests are expected to be flat.

A four-decades-old ban on the import of many Italian salumi (cured meats) has been lifted in the United States. The U.S. Department of Agriculture announced that the several Italian regions are free of swine vesicular disease and imports of pork products from those areas reportedly now present a low risk of introducing the disease into the United States.

The disease first was detected in the 1960s and can survive cooking and even long curing. Up to now, only a few Italian pork products were approved for import to the U.S.: prosciutto di Parma, prosciutto di San Daniele and mortadella.

PCC Board of Trustees election results, Board meeting report

Much as we think of our own bodies as comprised of essential organs, the biodynamic approach to farming also views farms as "organisms," with various "organs" working in harmony. Biodynamic farmers create biodiverse farms that rely little on outside inputs.