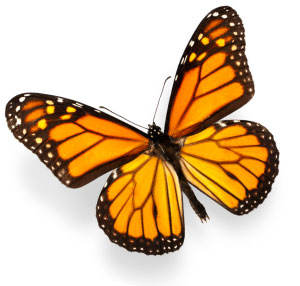 Millions of orange and black Monarch butterflies across the United States and southern Canada take off to fly south every year.

Ephemeral and delicate, these wild pollinators pick up environmental cues that tell them to head for mountainous regions in central Mexico or the California coast for the winter.

Monarchs navigate by coordinating circadian clocks in their brains with their sun compass antennas. They catch thermals (updrafts of warm air) and glide most of the way, traveling up to 100 miles a day. Monarchs can log up to 3,000 miles flying to the same locations their ancestors stayed, even though they’ve never made the journey.

No single butterfly makes the entire trip. The first generation flies to eucalyptus groves in coastal California or the oyamel fir forests in mountainous central Mexico, where they cluster on limbs. Oyamel needles shelter them from moisture.

In February and March, Monarchs mate and head north. Along the way, female Monarchs deposit eggs under milkweed leaves, the only food Monarch caterpillars eat. Emerging from a chrysalis, each short-lived (4-6 weeks) Monarch butterfly flies north in relays, eventually reaching fields in the northern United States and Canada.

But this great migration is in trouble. Monarch populations have dropped 59 percent in 2012 from the previous year. The area where Monarchs overwinter in Mexico has declined from 22 acres in 1994 to 2.9 acres in 2013. (The size of two soccer fields.) Monarch Watch reported that we’ve lost at least 147 million acres of Monarch habitat since 1992. (Four times the size of Illinois.)

Be alert for Monarchs in eastern Washington.

Working with prisoners at Washington State Penitentiary, Dr. David James, Monarch expert and associate professor of entomology at WSU, reared and tagged more than 3,000 Monarchs last year to learn more about the migration habits and seasonality of Monarchs in the Pacific Northwest.

According to James, Monarch populations have declined because of habitat losses in California.

The Monarch tagging project is on again this year and the release is scheduled for July through September.

If you see a tagged Monarch, note the number and contact monarch@wsu.edu.

The decline of Monarch populations is “likely due to a number of factors including habitat loss, pesticides and perhaps climate,” says Dr. David James, Monarch expert and associate professor of entomology at Washington State University (WSU). Logging near the Monarch Reserve in Mexico is one problem, but Mexico has slowed illegal logging in recent years. One of the greatest challenges for Monarch migration survival “is reduced areas of milkweed plants needed for Monarch development,” says James.

Roundup Ready corn was “introduced” to farmers in 1998. Bt corn contains its own insecticide, engineered from a soil bacterium, Bacillus thuringiensis. Roundup Ready corn and soy are genetically altered to absorb the herbicide, Roundup, under repeated spraying. Ninety-three percent of the 77.2 million acres of soybeans planted in the United States last year was GE soy; 80 percent of the 97.2 million acres of corn was GE corn. With Roundup, fields can be weed-free.

But weed-free fields have environmental consequences. Without milkweed, Monarchs die. We have “a virtual absence of milkweed in broad-acre crops with GE corn and soybeans, whereas with pre-GE crops, it was impossible to keep the fields weed-free,” says James.

Studies from the University of Minnesota and Iowa State reveal that milkweed patches in the Midwest disappeared from 1999 to 2010 due to changing agriculture practices. The Iowa study showed that in 1999 more than 51 percent of the soy and corn fields contained milkweed. Just 10 years later, due to increased planting of Roundup Ready plantings, only 8 percent of the Iowa fields contained milkweed. While increasing acreage for biofuels and livestock feed, these vast GE monocrops are consuming bird and Monarch habitats, now confined to roadsides in these crucial regions.

What can we do?

Provide Monarchs with habitat by growing milkweed. “While it’s most important for people in California to cultivate more milkweed, planting milkweed in Washington helps, too,” says James. Check out the Xerces Society’s Project Milkweed (xerces.org/milkweed) to help restore Monarch habitat.

As one of our wild pollinators, Monarchs help boost crop yields. With better land stewardship, support for sustainable farming practices, and increasing milkweed for Monarchs, we can improve the future for the Monarchs’ migration.

PCC Board of Trustees election results, Board meeting report