Farmers and food artisans think beyond the bank 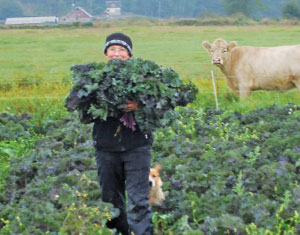 Organic farmer Michaele Blakely is raising money to save a house on Growing Things Farm in Carnation, Wash.

It used to be that if you wanted to raise money to start or expand a business, your first stop was the bank. That’s no longer true for a growing number of entrepreneurs, including a handful of local farmers and food artisans.

They’re turning the norms of business upside down — instead of financing their projects with bank loans (and high interest rates), they’re turning to their friends and neighbors. They’re raising money from their communities.

Contribute to Growing Things Farm’s campaign and watch a video about it.

Farmer Michelle Blakely is aiming to raise $20,000 by July 21 to save a house on Growing Things Farm in Carnation, Wash., which sells organic produce at the Redmond PCC and also is supported by PCC Farmland Trust. The house has been badly damaged by floods, and though Blakely received a grant from the county to raise the house out of flood height, she still needs money to repair damage already done.

“The initial code said we could not repair the house if it was damaged more than 50 percent of its value, so we were not allowed to do anything to it,” says Blakely. She says the house has sustained further damage from the winter weather and a few more floods.

She turned to Kickstarter.com, a crowd-funding website that allows everyone from artists and filmmakers to tofu-makers and other food artisans to raise money for their projects. Project creators set a funding goal and deadline. If people like a project, they can pledge money to make it happen.

Kickstarter has come under scrutiny recently for hosting a fundraising campaign for a “synthetic biology venture” claiming it will engineer glowing plants to “provide natural lighting with no electricity.” Environmental and consumer groups opposed to genetic engineering have demanded Kickstarter disaffiliate from the project.

Blakely’s campaign isn’t so controversial, and in fact, she says, is essential to sustaining her organic farm for future generations.

“If we do not get this house repaired we will never be able to have a house on the property again, due to code restrictions,” she says. “Before I leave this place I want to make sure it is a real farm that adheres to the values our country was built around. A house for a family is tantamount to that.”

Blakely decided to raise money through her crowd-funding campaign because she doesn’t have the financial means to support the project individually, but also, she says, “because I think saving family farms is something that belongs to the community, not just the individual farmer.”

Others in the Seattle area have fundraised through Community Sourced Capital (CSC), a new company that says it’s providing a simple way for community members to lend money to the local businesses where they find the most value. If you like cheese, for instance, you could have lent Willapa Hills Cheese a small no-interest loan ($50 up to $250) so the cheesemakers, Stephen Hueffed and Amy Turnbull, could update their equipment at their small farm and creamery in Southwest Washington.

The way CSC lending works is that it aggregates many small loans and turns them into one big loan for a business. Investors get paid back over time, as a percent of gross revenues. This means the lenders (consumers) have an incentive to see the businesses thrive.

“Our goal is to take ‘buy local’ to the next level with ‘finance local,'” says CSC co-founder Casey Dilloway. “We’re creating financial systems that are good for businesses and their communities, and we’re making it possible for every citizen to participate in the process. And you don’t have to donate money to get involved.”

The Willapa campaign, which ended in May, reached its $15,000 goal. Hueffed and Turnbull say they now will be able to make more of their award-winning artisan cow’s and sheep’s milk cheeses (sold at PCC).

Other food-related CSC campaigns include one that raised $12,000 for Starvation Alley Farms, a 10-acre transitional organic cranberry farm on the Long Beach Peninsula. “Of the 1,700 acres of cranberries in production in Washington, we will be the first to be officially USDA certified organic,” say farmers Jared Oakes and Jessika Tantisook. It’s an especially laudable goal given that there’s little research about how to grow cranberries organically. They’re developing methods to make it possible.

The money raised through the CSC campaign will be used to buy a new hydraulic juice press. “Buying the juicer will save us from making monthly trips to use a juicer in Portland, 110 miles from the farm,” the Oakes say. “Converting our berries from whole berries to juice also increases the price per pound of our product by a factor of ten.”

Much as we think of our own bodies as comprised of essential organs, the biodynamic approach to farming also views farms as "organisms," with various "organs" working in harmony. Biodynamic farmers create biodiverse farms that rely little on outside inputs.