Much as we think of our own bodies as comprised of essential organs, the biodynamic approach to farming also views farms as “organisms,” with various “organs” working in harmony.

“The thing I love about farming is putting all the systems together, getting everything to work together symbiotically,” says Aaron Otto of Moon Valley Organics, which sells body care products at PCC that are produced on its biodynamic farm.

You’ll find a handful of biodynamic products at PCC including a few body care brands and several brands of wine (see Biodynamic at PCC). The reason there aren’t more is because the standards for biodynamics are so exacting that not many U.S. farms have pursued biodynamic certification.

The principles of biodynamic farming were articulated in 1924 by Austrian philosopher and scientist Dr. Rudolf Steiner. Steiner delivered a series of lectures to farmers concerned about declining soil fertility and animal and crop health throughout much of Europe. The lectures detailed how his holistic, ecological view of nature might serve as a foundation for agriculture to prosper.

At his insistence, an Experimental Circle was established to test the practical application of his suggestions. The Circle had grown to some 400 farmers around the world by 1938, when Steiner’s assistant, Dr. Ehrenfried Pfeiffer, published the first book to disseminate biodynamic practices.

Today, a governing body, Demeter International, certifies more than 5,000 biodynamic farms and a great variety of products in more than 50 countries. Biodynamics lags behind in the States compared with Europe, New Zealand and Australia, where it is well-known and products are more available.

A unique feature of biodynamic farming is the use of biodynamic “preparations” made from herbs, quartz minerals or cow manure. They’re utilized in field sprays and for compost processing.

Steiner drew upon the lore of traditional herbalists from the countryside. His intention was that biodynamic “preps” act much like vitamins, stimulating the intricate biological dynamics between soil life and plant life and harmonizing the composting process.

Not all scientific studies of these biodynamic “preps” have been able to demonstrate measurable effects. But researchers from Washington State University (WSU) recently have shown on S&S Homestead Farm on Lopez Island that biodynamic preparations could make soil less acidic, offering a natural alternative to liming, a practice with a high carbon footprint. Researchers at WSU also have demonstrated scientifically significant effects of these biodynamic preps in the composting process.

Regardless, the unorthodox practice of making these on-farm formulations from natural materials often is ridiculed by well-meaning defenders of the scientific age. A popular target of skeptics is the practice of stuffing manure from a cow into a cow horn to be buried in the ground over the winter to ferment. Nevertheless, the humified end product removed from these horns, smelling like pleasant forest soil, has beneficial effects on roots, soil life and tilth — like a “sponge” for sourdough.

“If some of this sounds bizarre or unbelievable,” horticulturist Delmar McComb told Eucalyptus magazine, “ask yourself how rational it is to dump poisons on our food.”

But, “if you can’t accept the preps,” says prominent WSU soil scientist John Reganold, “don’t ignore the 99 percent else these farmers do!” 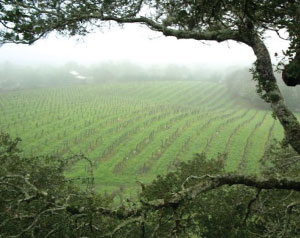 Quivira Vineyards and Winery in California

Organic agriculture can be industrialized, while biodynamic farms cannot.

Biodynamic farmers work with as few inputs from elsewhere as possible, creating a holistic, self-sustaining system. This is sustainability in principle and in practice, not as a hoped-for correction for the inherent problems that come with the industrialization of food production.

As farmer-philosopher Wendell Berry puts it, “The concerns and problems with modern farming “can be resolved only in the art of farming a particular farm.” Steiner remarked that “The process — not the substance — is important.”

In other words, what we eat should come from farms grounded in natural processes and relationships. The goal is health and quality, rather than commodity and quantity.

In terms of yield, biodynamically enhanced soil quality and root health can lead to relatively greater production than conventional and organic when yields are reduced overall by drought and stress. That’s a desirable feature under marginal conditions or climate change.

“We know what works,” says certified biodynamic Quivira Vineyards and Winery spokesman Andrew Fegelman. He says Quivira’s vines have withstood tough conditions for years and credits their healthy, strong roots to the biodynamic approach. Plus, he says, the terroir of the wine is enhanced by the sustainability of the farm. “What you’re getting in the bottle reflects the essence of the vineyard.”

Quivira pastures pigs and a flock of heirloom chickens in its vineyards. Such husbandry is required of biodynamics per se, but we can look past the label and hope that a re-introduction of such central ideals of biodynamic husbandry might further inspire our organic movement and loosen the grip of the industrial model.

“Consumers play an important role in the vitality of the farms,” says biodynamic farmer Erick Haakenson, who operates a successful CSA on Jubilee Farm in the Snoqualmie Valley with his wife, Wendy. The interaction of animals, plants and people at work in biodynamics, Erick says, is “such a simple, classic definition of sustainability.”

Millions of orange and black Monarch butterflies across the United States and southern Canada take off to fly south every year. But this great migration is in trouble. Monarch populations have dropped 59 percent in 2012 from the previous year.