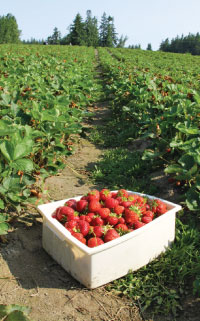 Scientists are reporting that honeybees are not necessarily the best pollinators. A collaboration of bee researchers from more than a dozen countries looked at how pollination happens in dozens of different crops, including strawberries, coffee, buckwheat, cherries and watermelons. They found even when beekeepers installed plenty of hives in a field, yields usually got a boost when wild, native insects, such as bumblebees or carpenter bees, also showed up.

American farmers are projected to plant and harvest huge amounts of corn, soybeans and wheat this year, according to economists at the U.S. Department of Agriculture. Assuming good weather, they’re predicting a record harvest of corn: 14 billion bushels, up nearly 40 percent over last year’s drought-crippled level, and say the price of the average bushel of corn could fall by a third. Soybean production and price are expected to follow a similar track.

Farmers are growing world-record amounts of rice in a village in India’s poorest state — with no genetically engineered seeds and no herbicides. The “super yields” are attributed to a method of growing crops called System of Root Intensification (SRI). It has increased yields dramatically with wheat, potatoes, sugar cane, yams, tomatoes, garlic, eggplant and many other crops and is being hailed as one of the most significant developments of the past 50 years for the world’s 500 million small-scale farmers.

The Pacific Razor clam, hand-harvested in Oregon and Washington, now has been rated a “Best Choice” by the Monterey Bay Aquarium Seafood Watch program.

The Alaska cod catch will again be at near record levels, although catches will be off slightly. This year’s quota in the Bering Sea is 260,000 metric tons, about the same as last year. The cod quota in the Gulf of Alaska is 60,000 tons, down about 8 percent from last year.