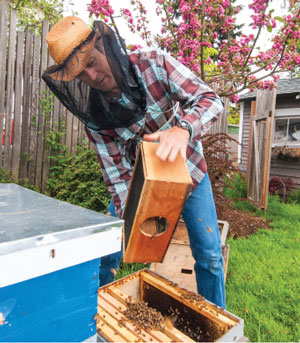 Corky Luster of the Ballard Bee Company installs a package of 10,000 honeybees into a backyard hive in Seattle’s Ballard neighborhood.
Photo by Dave Schiefelbein

If you notice more bees on your flowering plants this spring, it might be because a neighbor has taken up the latest craze in urban farming: beekeeping. It’s a growing pastime and some even say the humming honeybee hive will replace the clucking from the coop as the gardener’s favorite pet.

Bees are essential to our food supply. More than 90 crops, including Washington’s apple harvest, are bee-pollinated, and bees account for fruition of one-third of the food we eat.

One reason backyard beekeeping is hip is that people are concerned about the decline in bee populations and the shortage of bees to pollinate crops. (See this page for an update on Colony Collapse Disorder research.)

Besides supporting the food supply, bee-curious gardeners enjoy the “hive mind” workings of a colony and its sweet honey. For those who want to support pollinators without a hive, there is a growing movement to husband native nesting bees.

“People want to get involved and do something good for themselves and for the garden by keeping bees,” says Corky Luster, owner of Ballard Bee Company and the beekeeping instructor for Seattle Tilth, where classes routinely sell out.

It’s not just backyard gardeners buzzing about bees. High-profile urban hives are at the White House, which makes its own Honey Ale, and the Fairmont Olympic Hotel in downtown Seattle, whose tony Georgian restaurant offers “breakfast creations serving honey from our rooftop hives.” Hives also are on top of Chicago’s City Hall and in some of Seattle’s larger P-patches.

Evolving regulations are making urban hive-keeping easier. Cities are dropping restrictions against keeping bees (in Seattle, you can have up to four hives on a 10,000-square-foot property), and equipment and education are more available. Puget Sound Beekeepers Association (PSBA) meetings are packed, says its president Krista Conner.

Conner started in 2007 with two hives and now manages 20. She says people like that “beekeeping is the most immediately gratifying” of urban farming activities. There’s experimentation and a lifetime of learning, too. If you keep hives for two years, she says, you’ll be hooked.

“Having that energy of the hive, and this intentional way of dealing with pollination, was fascinating to me,” says backyard beekeeper Shawna Lee, who invited a beekeeper to put a hive in her Phinney Ridge backyard. “We definitely did get good honey,” she adds.

A number of local services can help you set up for hosting a hive. Luster advises people to get two hives because about 30 percent of hives fail the first year. One hive and all the equipment runs $400; two hives $700. Your setup will include protective suits, hive boxes with inner frames for honey, the developing bee brood, and tools for working in the hive.

You order honeybees by the pound in a starter package, but a mature hive may have as many as 50,000 bees in summer, perhaps dropping by half in winter. The colony will consist of a queen, a small percentage of drone bees (males that mate with the queen) and massive numbers of worker bees which are sterile females and do all the work, such as comb-building, guarding and foraging.

Classes offered by PSBA and others help you tackle issues such as handling the menacing Varroa mite, or weather conditions that threaten a colony in winter.

“Bees can handle cold, but they can’t handle cold and wet,” Conner says. Students learn what to plant for pollinators, too.
Honeybees typically travel 1 to 2 miles to forage, but they can range as far as 6 miles, communicating about food sources through airborne dances. One urban hive can mean better production for the entire neighborhood’s fruit trees.

There’s a non-hive option to get those trees pollinated, too. Native bees can be cultivated in smaller quantities at much less expense by the home gardener, says Dave Hunter, owner of Crown Bees in Woodinville and president of the nascent Orchard Bee Association. Native bees are not social like honeybees, but solitary.

The most familiar solitary bee is the mason bee, which nests and cocoons its eggs in holes in old trees, or in tubes that a gardener installs. They don’t have a queen or hive to protect, are energetic pollinators, and range just 300 feet from their nests. The gentle mason bees also take much less care. Although native mason bees are not now available in quantity, they may be part of solving the shortage of commercial pollinators.

Hunter has been working with California almond orchardists to try mason bees instead of, or along with imported hives. Bolstered by early success, they’re creating a model to use in other orchards.

“We need to propagate the species,” he explains. Once there are enough mason bees available, “we’re going to educate the farmers and introduce mason bees into their orchards.”

Gardeners can help, Hunter says. Through a new initiative called BeeGAP (Bee Gardeners Adding Pollinators), people can propagate more mason bees than they need, then give or sell their excess bee cocoons to commercial operations.

Mason bees and supplies are available through nurseries and a few local companies including some offering rental services. To get started, gardeners need to set up the nesting house with a supply of cocoons for hatching in April and May.

Even if you can’t host bees, you can help if you’re a gardener. When the thermometer hits the 50s, bees take to the air looking for nectar, their food and the basis of honey and pollen.

Flowering trees often are the earliest food source, but bees need a three-season blooming buffet. Gardeners can focus on seasonal blooms to feed the bees, says the Xerces Society, which is promoting a “Bring Back the Pollinators” campaign. Lupine is early-blooming, lavender and vegetables provide mid-season flowers, and dahlias and sunflowers are late-bloomers, for example.

The sweet reward, besides abundant fruit or flavorful honey, lies in the wonder of bees. “You really enjoy seeing these incredible insects at work,” says Luster. “You marvel at it. How did they do that, make wax or make those cells so perfectly? It’s a miracle, it really is.”

Bill Thorness is the author of “Cool Season Gardener: Extend the Harvest, Plan Ahead, and Grow Vegetables Year Round,” just released by Skipstone Books.

PCC Board of Trustees report, April 2013

Notice of annual membership meeting, 2013 election, Next Board Meeting