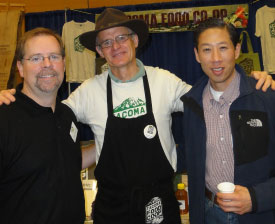 PCC board members John Sheller (l) and Stephen Tan (r) met Henri Parren (center) at 2011’s Co-opalooza. Parren is general manager of the Tacoma Food Co-op. PCC’s board has especially enjoyed connecting with other co-ops during this International Year of the Co-op.

According to UN Secretary General Ban Ki-moon, the UN designated 2012 as the International Year of the Co-op as a “reminder to the international community that it is possible to pursue both economic viability and social responsibility.”

The board’s Member Relations Committee focuses on ways the board can stay connected to our members. On behalf of the whole board, the committee plans the member meetings and other board outreach events. Last fall, the committee recommended, and the board approved, a move away from large fall meetings in a static location. Instead, the PCC board and staff will be hosting intimate, casual meetings in our store classrooms and other venues near our stores.

These smaller events will offer more frequent opportunities on the east and west sides to learn and participate in meaningful dialogue about topics of interest to our members and board.

This change in format will not impact the April Annual Member Meeting, currently being planned for the popular St. Demetrios location in Seattle. Annual meetings will continue to be large, well-attended celebrations of food and co-ops, as well as PCC’s annual business meeting and board election kickoff.

We’re looking for applicants for PCC board service — individuals who work well in collaborative settings.

Previous board experience is helpful.

Board members serve a three-year term and receive an annual stipend.

In celebration of the 2012 International Year of Cooperatives (IYC) and National Co-op Month, in October, the first of our newly designed gatherings will be a celebration of co-ops. In keeping with the IYC theme, “Cooperatives Build a Better World,” Director of Sustainability Diana Chapman will talk about PCC’s history and its impact on our region.

The event will be in the Redmond store classroom Wednesday, October 17, at 6 p.m. Seating is very limited, so only the first 20 members to call will be able to attend. Call the business office at 206-547-1222 to reserve a spot. We’ll host similar events approximately once each quarter, so stay tuned.

PCC began its IYC celebration last October with Co-opalooza — a local expo featuring a variety of co-ops in our area. Additionally, board members attended the national Consumer Cooperative Management Association (CCMA) conference in 2012 and conducted a study session on co-ops at their February 2012 board retreat.

PCC also will present at one of the sessions at the 2012 annual meeting of the National Cooperative Business Association at the Seattle Red Lion, October 2-4. PCC management will conduct a tour of one of our locations for visiting co-op folks from around the United States.

At its May meeting the board voted to contract with Gilmore Research Group to conduct a member survey in support of the board’s policy on member relations, which states in part:

“The Board shall commission research of the members not less than every three years. Such research shall be designed to fairly and adequately represent the entire membership.”

Gilmore has conducted previous member surveys for PCC and has a national reputation for excellence.

In conjunction with the 2013 member survey, the board’s Member Relations Committee will be assessing current communications, feedback and educational opportunities for members in support of PCC’s Ends policies. Please take a few moments to give us your feedback if you are called by one of the researchers from Gilmore.

The July 31 board meeting occurred after press time. Trustees were scheduled to approve committee rosters for the four standing committees for 2012-2013 and hear the annual update from PCC Farmland Trust’s executive director.

The next board meeting is scheduled for September 25 at 5 p.m., with member comments at 7 p.m.

What's the difference between an ale and a lager? Find out, plus staff picks, and terms you should know to be a beer geek.