Almost all beers are made using the same steps and ingredients and every beer is either an ale or a lager. There now are nearly 2,000 craft breweries in the United States reviving ancient recipes, perfecting the classics, and developing new styles completely.

Our beer aisles at PCC are bubbling over with these craft brews, many from artisans right here in the Pacific Northwest. Here’s a primer with staff picks and other tips for even the most avid beer aficionados.

Pale ale — hoppy, medium-bodied, with a flavor that balances the hops and malted barley. Despite the name, pale ales typically are bronze or even reddish.

India pale ale (IPA) — originally produced in England to export to British soldiers stationed in India, IPA had the level of alcohol (7-8 percent) and hops (act as a preservative) to withstand the voyage of up to six months. Today’s IPAs are slightly more bitter than regular pale ale.

Wheat beer, Weizenbier, Witbier — brewed with raw wheat along with barley, usually medium-bodied with citrus notes and a yeasty aroma.

Belgian lambic — unlike conventional ales, which are fermented by carefully cultivated strains of brewer’s yeasts, lambic beer is produced by spontaneous fermentation: it is exposed to the wild yeasts and bacteria said to be native to the Senne Valley in Belgium. This process gives the beer its distinctive flavor: dry and cidery, usually with a sour aftertaste. It is light-bodied with little hop flavor or bitterness.

Staff pick: Deschutes Black Butte Porter — dark but not too heavy, and more malty than hoppy.

Stout — the darkest and heartiest of beers, with a chocolate-coffee flavor and fuller body than other ales. This is achieved by brewing with barley that has been dark-roasted to the point of charring (think espresso beans compared to a medium-roast coffee). It is both darker and maltier than porter.

Märzen — commonly called Oktoberfest, this is a lager style that originated in Bavaria. It’s usually medium-to full-bodied and is characterized by a malty flavor and a clean, dry finish.

Staff Pick: Bayern Brewing, Inc.’s Oktoberfest — malty but not too sweet, with a lovely, crisp hop note. Makes us wish it was Oktoberfest year-round!

Pilsner — a crisp, golden-colored, highly-hopped lager; pilsners are a fairly dry style of beer with a strong malt flavor. Pilsner is the most popular lager in the world today.

How beer is made 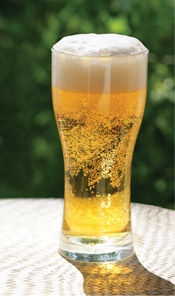 Beer that’s served ice-cold may have its flavors muted by the chill. Many beers, especially darker ones, are best at temperatures slightly warmer than the fridge.

Terms you should know to be a beer geek

Lagers — made from yeasts adapted to cold temperatures. Most mass-market beers such as Budweiser are lagers: they’re light-colored and relatively low in alcohol. The result of the cold fermentation is a lighter, crisper, smoother beer.

Ales — fermented at warmer temperatures and often contain higher amounts of hops and malt, and have a fuller body and more intense flavor than lagers.

Session beer — Beer that has a mid-level alcoholic content, perhaps 5 to 6 percent. The term comes from the British concept of a beer that can be drunk over the course of a multi-hour session of drinking, without rendering the drinker drunk. Such beers also are referred to as “sessionable.”

Extreme beer — pushes the boundaries of brewing. Extreme beers may have alcohol contents that rival spirits, be aged in bourbon barrels, be made with a huge amount of hops, or use exotic ingredients.

Sour beer — Unlike traditional beer-brewing done in a sterile environment to guard against the intrusion of wild yeast, sour beers are made by allowing wild yeast strains or bacteria into the brew. The result is an acidic, tart, sour taste.