GMO sweet corn-on-the-cob: not at PCC 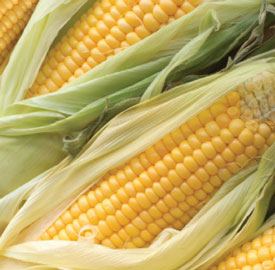 This year, genetically engineered sweet corn-on-the-cob hits the U.S. market for the first time. You will not find it at PCC.

Monsanto is hoping farmers will grow its sweet corn with genetically modified organisms (GMOs) on 250,000 acres next year, which is roughly 40 percent of the U.S. sweet corn market. This year, for the first time ever, Monsanto’s sweet corn makes its debut anonymously in grocery stores, produce stands and farmers markets.

Like other GMO products, it won’t be labeled, so you won’t know whether it is or isn’t, unless the retailer provides some credible assurance. At PCC, we can say with confidence and assurance you will not find GMO sweet corn in our stores.

But we also are delighted to say our non-organic sweet corn from Simone and Massoni in northern California also assuredly is not GMO. We talked with the supplier of the seed planted by Simone and Massoni and got answers that stand up to even the most rigorous standards.

Illinois Foundation Seeds faxed us paperwork stating its sweet corn seed was developed from traditional plant-breeding techniques, without GMOs. Even better, the seed supplier explained to us in a conversation that it uses an extremely sensitive test method to detect GMO DNA.

This so-called PCR (polymerase chain reaction) test identifies individual GMO traits engineered into a seed. PCR testing is more sensitive and more costly than the quicker “strip test,” which indicates only whether GMO proteins are present but does not identify the actual traits (herbicide, insecticide, etc.). The three traits engineered into Monsanto’s new GMO sweet corn are two insecticides for corn-borer and rootworm, and the ability to absorb glyphosate without apparent damage.

Illinois Foundation Seeds also told us it tests each load of seed as it comes in. Wow. We feel the Simone and Massoni growers deserve recognition.
Other genetically engineered (GE) corn varieties have been on the market since 1996. They’re used typically for non-organic animal feed or as derivative ingredients in non-organic processed foods.

Food & Water Watch and other allies forged a campaign to pressure national grocery chains to say “no” to GMO sweet corn. Wal-Mart was the key target since it’s the largest U.S. grocer. The response was overwhelming.

Wal-Mart’s response? An evasive statement that it doesn’t “specifically source” GMO foods and “follows all federal and state regulations.”

Most other retailers also are likely to be unresponsive to consumers’ concerns about the risks of GE foods until laws force them to label and be accountable.

Food & Water Watch has endorsed the Washington state GMO labeling initiative. Now getting that approved would be sweet!

What's the difference between an ale and a lager? Find out, plus staff picks, and terms you should know to be a beer geek.