This article was originally published in June 2011 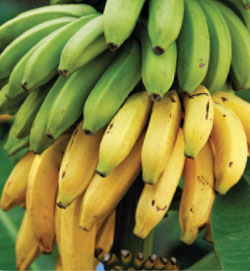 I am hardly alone. Bananas are the most popular fruit in America today, the #1 bestseller in grocery stores nationwide, and their sales are greater than apples and oranges combined.

This for a fruit that wasn’t even a staple in American markets until the late 1800s, when the United Fruit Company (now Chiquita) figured out how to clear Latin American rainforests, build train networks, and develop refrigeration that enabled bananas to make the long journey to America.

Given its popularity, it is hard to imagine that the ubiquitous banana — the one Americans have been eating for so many years — could disappear from grocery shelves in the not too distant future.

But it already has happened to the banana once before.

Rise of the Cavendish

For the first part of the 20th century, up until the late 1950s, the Gros Michel (or Big Mike) was the dominant banana sold in the United States and Europe. But a Panama fungal disease effectively wiped it out and now the Gros Michel is rare to find. The banana industry nearly collapsed.

After a few years of scrambling, the Cavendish, an Asian variety that was brought to Latin America, emerged in the 1960s as a mass market replacement for the Gros Michel. One reason is that it was resistant to the original Panama disease. But to many, it is a lesser banana.

Those who remember the Gros Michel describe it as having a much richer banana taste than the Cavendish. Indeed, people who try non-Cavendish bananas in countries where they are grown find bananas come in a surprising diversity of flavors.

Today, almost all bananas consumed by Americans and Europeans are of the Cavendish variety, even though there are several hundred kinds of bananas in the world. All Cavendish bananas are sterile, seedless and genetically identical — virtual carbon copies of each other.

The uniform nature of the Cavendish, with its thick skin protecting it from bruises, and its consistent and reliable ripening, is beloved by Dole, Chiquita and Del Monte, the titans of the industry. In many ways, the Cavendish represents the monoculture of bananas.

But while the Cavendish has been wildly successful as a mass market product over the past several decades, its genetic uniformity has left it highly vulnerable to disease.

Additionally, the major banana companies have been criticized for decades for poor labor and environmental practices.

Dan Koeppel, author of “Banana: The Fate of the Fruit That Changed The World,” has studied bananas for several years. Over the past decade, a new and more virulent strain of Panama disease, known as Tropical Race 4, has begun to spread across the world. The Cavendish, ominously, is susceptible to this new variant.

The disease first struck plantations in Indonesia and Malaysia a couple of decades ago, wiping out Cavendish bananas there, and in recent years has spread increasingly quickly to other countries. Australia’s banana industry has been particularly hard hit by the disease recently. Koeppel says the fungus is expected to reach Latin America and the Cavendish plantations where America gets most of its bananas within possibly a decade or two.

“I don’t have a crystal ball,” University of Florida plant pathologist Randy Ploetz, who first identified Tropical Race 4, told “The New Yorker.” “People are bringing stuff in their luggage, moving stuff around in the world that they shouldn’t be. I hope it doesn’t happen, but history has shown that this kind of stuff does happen.”

Some people liken the looming banana crisis to the Irish potato famine of the 1840s and experts are worried that bananas are set up to fail in much the same way. Irish farmers planted vast volumes of one type of high-yield potato over large areas. Whole fields of potatoes rotted overnight from an airborne fungus.

While Westerners have an abundance of other fruits at the supermarket and could absorb the loss of bananas, they are a crucial food staple in many developing countries — an inexpensive source of nutritious calories. Bananas and plantains are the world’s fourth most popular food crop, after rice, wheat and corn.

In the United States, we eat on average about 26 pounds per year, but in some African countries like Uganda and Rwanda, people eat 550 pounds per year.

East African banana plantations, which do not grow the Cavendish, are under threat from the bacterial banana Xanthomonas wilt (BXW) disease, which causes banana plants to wilt and produce either no fruit or inedible fruit. BXW has hit as many of 80 percent of banana farms in central Uganda, according to “The Guardian.” 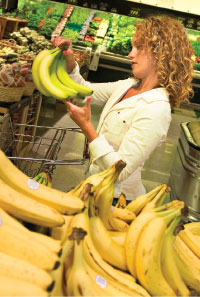 Cavendish bananas, the most popular fruit in American today, are seedless and sexless — hard to fortify against disease.

So what to do about the threat to bananas, whether the Cavendish or the more exotic varieties in the developing world?

Koeppel says so far, there is no replacement for the Cavendish. “They’re in a bind. The business model of the banana companies is like that of McDonald’s. They sell one [lousy] product in huge bulk at low prices. There’s a real problem to get diversity in the banana market.”

Dole Vice President of Marketing David Bright says that company is looking for alternatives to the Cavendish. “I’d love to see it happen. It’s difficult to beat the Cavendish,” Bright says. “The Cavendish we have right now is a banana that eats really well, grows well, packs well and is resistant to many other types of diseases.”

Bringing new bananas to market would require consumer education, he says, because many varieties’ peels may have brown spots and look unappealing when ready to eat. “We’ve run test markets. It’s just a matter of getting the right banana,” he says.

PCC has tried to introduce exotic bananas to shoppers over the years, with limited customer acceptance.

Some scientists are looking for solutions in crossbreeding wild varieties of bananas with the Cavendish. But bananas, being seedless and sexless, are hard to fortify effectively against disease.

Moreover, the U.N. Food and Agriculture Organization reports that deforestation has wiped out many wild species in the developing world, and much of the world’s genetic stock of bananas has been lost, decreasing the amount of suitable genetic material available for scientists to work with.

Koeppel argues for genetic engineering (GE) as one solution. While he recognizes that it will be hard to convince the public to eat GE bananas, he says that bananas make an excellent candidate for genetic modification because they can’t reproduce and release GE into the wild.

While GE crops are banned in Uganda and Ugandans are generally wary of genetically engineered foods, scientists there have been working on adding a sweet pepper gene that is thought to improve disease resistance. In trials, six out of eight GE strains of bananas have shown to be resistant to BXW.

Some argue, though, that crossbreeding and GE methods would not guarantee the banana against the next mutation of Panama Disease or some other disease that might come around.

The bigger solution, Koeppel concedes, is to work on increasing the diversity of bananas coming to market. This is an answer that is likely more amenable to the typical PCC shopper. There would be challenges to find varieties of bananas that will meet taste demands of consumers, and can be shipped over long distances effectively.

“When you have a monoculture you still end up with the same problem,” Koeppel says. “Banana diseases are devastating no matter what variety you’re talking about. As long as you’re putting all your bananas in one basket you’re still at risk.”

Specialty bananas may be harder to find, but they’re worth looking for. Bananas come in many sizes, flavors and colors. Some banana varieties are known for an apple-like taste. Others are said to have a much stronger banana flavor than the Cavendish and may have a creamy consistency like home-made ice cream. Some, when cooked, taste like strawberries.

Even if you are buying the Cavendish, it is preferable to buy bananas from companies that don’t exploit their workers and minimize their impact on the environment.

Since 2004, PCC has sold only bananas under the GROW (Giving Resources and Opportunities to Workers) label. These organic bananas come from Organics Unlimited, a San Diego-based distributor of organic produce from small farms in Mexico and Ecuador.

The nonprofit GROW organization receives 60 cents from every case of bananas sold at PCC, which benefits scholarships and other programs in the villages where workers live. This premium is not passed on to shoppers but is absorbed by PCC in the form of a smaller sales margin.

“By utilizing small growers in Ecuador and Mexico, we are continuing our mission to provide better lives for the workers, their families, and future generations,” says Organics Unlimited President Mayra Velazquez de Leon. “Every purchase of GROW bananas provides communities with a fund that goes solely toward programs that encourage health, education and well being.”

In the past five years, the GROW fund has granted more than $500,000 in support of social programs in Mexico and Ecuador, including education programs, community development, health services and more.