Foraging in our own backyard

This article was originally published in June 2011 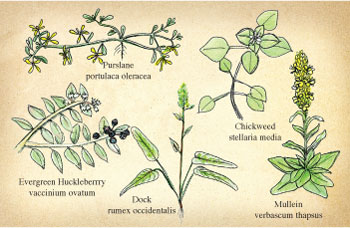 Purslane, Huckleberry, Dock, Mullein and Chickweed — all edible “weeds” that can be found foraging in your backyard.

If you’re outside the University of Washington’s botany greenhouse around lunchtime, you might find a few students enjoying lunch at the picnic bench under the fig tree.

If you look closely in their salad bowls, you won’t find the expected romaine and spinach, however, but rather an assortment of perhaps unfamiliar greens and berries. That’s because their salads didn’t come from the produce section of a grocery store — they were foraged from all over the UW campus!

These students, part of the Edible Campus Project, are identifying and mapping edible plants on the UW campus. So far, they’ve divided the campus into quadrants and plan to have a foraging guide available to the public this spring.

They aren’t the only ones in Seattle with their eyes glued to the landscaping: with urban agriculture and food security becoming increasingly relevant in today’s food system, more and more people are taking a closer look at food sources within their own city.

You’ll find that once you start looking, there is a bounty to be found in some of the most unexpected places — the edge of a soccer field, woodsy patches, and yes, even your own backyard.

You’ve probably done some urban foraging already without realizing it. Have you ever gone blackberry picking, or snacked on some wild strawberries? Many of the plants we normally consider to be weeds actually are nutritionally rich and can be used to bring new zest to tried and true recipes usually made from grocery store standards.

For example, dandelions grow abundantly in grassy areas. The greens are spicy and can be eaten like arugula. Or, try putting the greens in a food processor with walnuts, parmesan and olive oil for dandelion pesto. The root can be roasted and steeped as an herbal coffee substitute. Ever had dandelion wine? It’s made from the flowers.

Native edible plants often have fascinating stories behind them, having played both culinary and medicinal roles in local traditional cultures. Our most common native plants are evergreen trees, especially Douglas Fir and Western Red Cedar.

Native Americans of the Hoh, Quileute, Quinault and Makah tribes chewed the sap of these two trees like chewing gum to help sore throats. The new shoots can be eaten in salads, and older needles can be made into flavorful “tree tea,” very high in vitamin C.

Please note: Western Red Cedar should not be consumed by pregnant women, as it can cause complications in birthing. And remember when harvesting from these trees, as well as when foraging for any wild plant, it is important to be aware of poisonous lookalikes. The Yew tree, another evergreen common in this area, is highly toxic.

Its fun to nibble on a dandelion from your yard, and bringing wild greens pesto to a potluck is a slick party trick, but foraging also provokes questions about broader food system issues. How can a dandelion change how we see our food system?

Viewing “weeds” as edible plants or medicines can teach us an entirely new way to look at the urban landscape and encourages us to redefine what we consider resources and what we consider waste. One of the goals of the Edible Campus Project is to retrain ourselves to be more observant of our surroundings — to open our eyes to the oft-overlooked abundance that exists all around us.

There’s no need to swear off store-bought arugula and begin collecting dandelion leaves like they’re going extinct to learn a valuable lesson from foraging. Even if you haven’t yet been convinced to start nibbling on “weeds,” if you recognize one or two more plants the next time you go on a walk, then you’ve already started to change how you see our city.

Foraging offers another way to teach ourselves to care for the natural environment of which our city is a part.

Seattlite Helen Vaskevitch recently moved to a homestead in Jacksonville, Oregon, where she works in the garden and forages fresh salads daily from the woods around her cabin.