Chef and author Tamara Murphy of Brasa and Elliot Bay Café will be hosting the next Local Chefs for Local Farms on June 27th at the Reading Room in Pioneer Square.

We hope you’ll join us.

On a March evening, in a warm and cozy bungalow In Wallingford, we sat around tables showcasing the remnants of a spring meal well and thoroughly enjoyed.

Of particular note was the first dish: a spectacular creamy sunchoke soup, carefully poured from small pitchers into beautiful bowls waiting in front of us, accented with a masterful blend of shaved watercress, Dungeness crab, and preserved lemon.

It was a soup of total revelation — and for me, a soup that recalled memories of a visit to Delta Farm, not two months earlier.

It was during what must have been the bleakest week of January when I traveled to Sequim. There was a layer of snow on the fields and the pigs on the periphery of the farm were grumbling and traveling in small skittish groups, waiting out the inescapable grayness of middle winter. 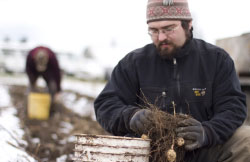 Joe, who studied analytical chemistry in college, is a full-time member of Nash’s crew.

A few blocks away, on another section of Nash Huber’s patchwork farm, the packing shed was a bright contrast — full of people, activity, noise and the unmistakably fresh scent of carrots. The crew in the shed was just about to head into the fields to dig up sunchokes, and we rode alongside the beat-up pickup truck to watch them in their efforts.

Delta Farm lies in the Dungeness Valley, one of the most conducive microclimates in the world for many of the specific crops and seeds grown by Nash’s Organic Produce. It is also an area uniquely well-suited to farming year-round. If you are a fan of root vegetables, Nash is your man. Even in January, the farm is humming with the harvest of beets, parsnips, rutabagas, carrots, and of course, the humble sunchoke.

If we’re being honest, sunchokes are kind of an ugly vegetable — they’re knobby, but not in a pretty way, like say, ginger. They’re sometimes referred to as “Jerusalem artichokes,” even though they have nothing to do with Jerusalem, and any comparison to the easily delicious artichoke is frankly unfair. Despite their commendable nutritional profile, they tend to discolor or turn to starchy mush in the wrong hands.

Standing with frozen toes in the brown and white fields of Delta Farm, we watched with respect the efficiency and hard work of the crew in their Carharts and muddy work gloves, digging these ugly stepchildren of the vegetable world out of the cold earth and plunking them into buckets. I confided to one of the crew members that I’d never had much luck with the things, and asked if he ever ate them. He grinned sheepishly and said that he was not a fan either.

So you may imagine my surprise a couple of months later at Tilth restaurant at PCC Farmland Trust’s quarterly Local Chefs for Local Farms event, when Chef Maria Hines’ sunchoke soup (paired with a generously donated and wonderful 2009 Martina Prieto Verdejo) pretty much blew my mind. Could this possibly have been the same grubby little vegetable?

To me, our Local Chefs for Local Farms events really bring home the direct connection between farm and plate, but also highlight the alliance between growers and the person who coaxes that food into nourishment. I think part of what made that sunchoke soup so good was the very human collaborations — all of those hard, hard workers and growers on the one end of the process, and the very mindful preparation, and appreciation, on the other end.

It’s easy to lose sight of just how lucky we are in the Pacific Northwest — to have access to the communities and vision that make such great eating, paired with sustainable farming, possible. It is a privilege to eat so well; to be able to eat with a satisfied conscience.

That we have such a supportive and accomplished group of local chefs in our region, working together with farmers and with the PCC Farmland Trust to educate the public about the importance of preserving organic farmland — well, you practically owe it to yourself to attend the next dinner and enjoy your own delicious version of sunchoke epiphany.

PCC Board of Trustees report, June 2011