This article was originally published in March 2011 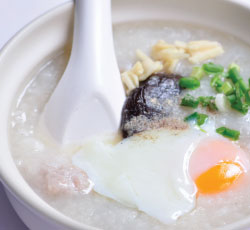 View all the recipes in the March Sound Consumer.

What do PCC shoppers eat for breakfast?

PCC shoppers sure like their oatmeal and they find plenty of ways to dress it up — with berries, nuts, cinnamon, milk and more.

But here are other creative ways you told us you start the day:

America may be a hotbed of innovation where imagination has no limit — but you wouldn’t know it by looking at our breakfast plates.

Ask most Americans what they eat in the mornings and you’re likely to hear a rather uninspired list: bacon and eggs, pancakes and waffles, muffins and pastries, toast, yogurt, oatmeal. Most common of all, of course, is cold cereal with milk — chosen by nearly a third of all adult breakfast eaters, according to an ABC poll.

“It’s amazing that we think so narrowly about breakfast, when we’d never limit ourselves to just a handful of foods for lunch or dinner,” says Cynthia Lair, a faculty member of Bastyr University’s nutrition program. “It’s high time we thought outside the cereal box!”

I took this challenge to heart one morning when, tired of my usual yogurt-with-fruit routine, I decided to eat leftovers from dinner — a small piece of wild salmon, sautéed greens, and quinoa salad — for breakfast instead. Wow! It was like a shot of energy, and kept me moving until mid-afternoon, when I was ready for a light lunch.

The next day, I tried the experiment again: instead of toast, I ate some Thai coconut curry with tofu — warm and hearty, with a spicy kick that gave me more of a jumpstart than coffee, it made me feel the same as I had the day before — pleasantly full and energized for hours.

It turns out, many people are — just not in the United States, where only 40 percent of adults say they eat breakfast at all. In cultures around the world, breakfasts are substantial and as diverse and colorful as the countries where they’re eaten.

Breakfasts around the world

“My grandmother loved rice soup for breakfast, and I often joined her savoring this soul food before our day began,” says Pranee Halvorsen, an instructor in the PCC Cooks program who teaches recipes from her native Phuket, Thailand. She says this simple meal, made with chicken, pork or shrimp, still is one of her favorites.

Steaming soups are common for breakfast throughout Asia. There’s the noodle-based pho in Vietnam, and miso soup is a mainstay in Japan, where it’s served with rice. Sometimes pickled vegetables, natto (fermented soy beans), fish roe, broiled salmon, pickled plums, or nori are served as well — but rice and miso soup form the backbones of the morning meal, says Kanako Koizumi, who teaches Japanese cooking classes at PCC.

Breakfasts that are quick and easy but filling also rule in Korea, where it’s popular to have bibimbap (a mixed bowl of rice with sautéed vegetables and an egg or sliced meat), and in Indonesia, where nasi goreng (a fried rice) is prevalent. Traditionally it’s made out of rice and meat left over from the night before, fried with shallot, tomato, pepper and chili. Vibrant curries (also left over from dinner) and mie bakso (noodle soup with meatballs) are common Indonesian breakfast fare, too.

To the north of Indonesia, in Hong Kong, PCC Cooks instructor Christina Chung eats millet porridge for breakfast, which she says often is served with meat, fish, vegetables, noodles and pickles.

Meanwhile, if you wake up in Africa instead of Asia, you might encounter beans at your breakfast table. In Ethiopia they’re served with a flatbread called injera, while in Uganda they’re tucked in an omelet with tomatoes, cabbage and onions that’s rolled in chapatti (unleavened bread), known as a rolex. Fava beans simmered in garlic are traditional in Egypt.

Hop the pond to South America and you’ll find beans shine again. A friend who lives in Guatemala reports that breakfast there is the best meal of the day and includes black beans, eggs, fried masa slices, and queso fresco on top.

In the countryside of Ecuador, she says, it’s common to have hearty breakfasts with meat and rice, or fish and plantains near the coast, while restaurants in the cities serve what’s called desayuno americano — “American breakfast” — coffee, rolls with butter and jam, eggs and fruit juice.

It’s no surprise that if hot, hearty and savory breakfasts are popular even in warm countries, they’re practically essential in cold ones. “Hot meals are very important in Russia because it’s considered much healthier for your stomach and more filling than cold food,” says PCC Cooks Instructor Irina Vodonos.

“Growing up in Moscow, on weekdays we ate cooked buckwheat groats (kasha) with a bit of butter,” she says, while one of her favorite leisurely weekend breakfasts was hot boiled potatoes topped with butter and served with salted herring or another salted or smoked fish, eaten with raw onions and tomatoes, cucumbers, and fresh herbs.

Herring appears in the breakfasts of another northern country — Norway — where they’re often eaten atop slices of bread. Norwegians and other Scandinavians eat open-faced sandwiches known as smørbrød, with cheeses, meats, hard-boiled eggs and other ingredients, for breakfast and lunch.

These are just snapshots of morning appetites around the world, of course, and certainly not definitive or comprehensive. But the trend is hard to miss: the global appetite favors savory, nutritionally balanced meals for breakfast.

Sure, a buttery croissant is standard in France, and fried churros dunked in hot chocolate are a sweet start to the day in Spain. But by and large, curried noodles or rice, or beans with eggs, seem to hit the spot first thing — and, as we’ll see, it’s for good reason.

We’ve all heard that breakfast is the most important meal, and what we eat is just as critical. Breakfast sets the metabolic rhythm for the day, says Cynthia Lair. “If you don’t eat a substantial breakfast, you’ll try to catch up throughout the day and may end up overeating.” But what constitutes a substantial breakfast?

When you wake up in the morning, your blood sugar may be low because you haven’t eaten since the night before. So when you do eat — literally break your fast — it’s important your morning meal has protein, fat, complex carbs and fiber, according to Lair and other nutrition experts. A breakfast with all four will allow your blood sugar to rise steadily and provide you with energy to go about your morning routine.

“That’s the reason the typical American breakfast of cold cereal, skim milk and orange juice is so unsatisfying,” says nutrition counselor Kate Crosby. “It lacks the protein and fat elements. In contrast, a breakfast of an egg or two with spinach and sweet potato, all cooked in a little butter, keeps blood sugar stable and staves off hunger for much longer.”

Some of Crosby’s other favorite, nutritionally balanced breakfasts include soup with chicken and wild rice, chili, or leftovers from a healthy dinner.

You don’t have to parse a breakfast — or any meal — into its individual nutritional components to make sure it’s “substantial.” But knowing a little about how certain foods impact blood sugar and satiety can be helpful in deciding what to eat.

The Glycemic Index (GI) is a useful tool for this. It measures how quickly a certain food is digested. Foods with high GI values — such as most breakfast cereals, muffins and pastries — are digested quickly, causing blood sugar to rise rapidly. Foods with low GI values — such as most fruits and vegetables, oats, beans, legumes and nuts — are digested slowly and keep blood sugar levels stable. Meat, poultry, fish, cheese and eggs have GI values of zero.

Some health professionals believe that eating plenty of low-GI foods keeps you more satisfied for a longer period of time. So the bakso, the Indonesian noodle soup with meatballs and greens, or muesli with oats, nuts and fruit, eaten in Switzerland, make good nutritional sense. They have some of each of the elements needed to keep blood sugar stable, and keep hunger at bay until lunch.

The health benefits of eating low-GI foods in the mornings could be especially important for American kids, who are the target of relentless ad campaigns by sugary cereal companies. A recent study found, however, that kids are glad to eat low-sugar breakfast cereals if given choices and that many compensate for the missing sweetness by choosing fruit instead.

But of course it’s not just kids who benefit from wholesome, balanced breakfasts. Research shows that people who eat more of their calories at breakfast are likely to consume fewer calories overall than those who eat bigger meals later in the day.

Eating protein and fat at the morning meal appears especially important for weight management — one study of overweight women on diets found that those who ate an egg breakfast lost 65 percent more weight than those who ate a bagel breakfast, even though the number of calories and the weight of the meals were the same.

Okay, so fish or pho may not be appetizing at 8 a.m. for everyone, but if there’s a group who can “think outside the cereal box” for breakfasts that are filling and fast, it’s PCC’s health-conscious, food-loving shoppers.

We polled you on our website a couple months ago and found lots of inspiration in your choices. Check out the results of our breakfast poll.

Notes from the Cellar: Chinook Wines: A taste of the real Washington