by Barb Schiltz and Eli Penberthy

This article was originally published in July 2009 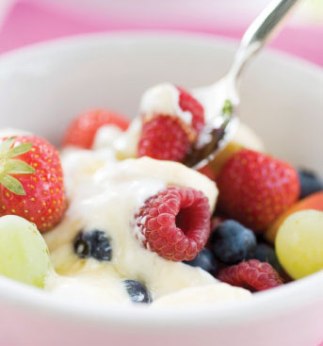 (July 2009) — From “The South Beach Diet” to “The Zone,” many trendy diets are based on the concept that not all carbohydrates are the same — some are better than others for weight loss and good health.

While common sense tells us it’s good to eat whole grains and fresh fruits and vegetables, a tool called the glycemic index (GI) makes it even easier to choose wholesome foods that may aid weight loss and help prevent disease.

The GI classifies foods according to how they affect blood sugar levels, measuring how quickly a certain food is digested. Those with high GI values — such as most breakfast cereals, white rice and foods with refined grains — are digested quickly, causing blood sugar to rise rapidly.

Foods with low GI values — such as most fruits and vegetables, oats, beans and legumes, nuts, and other whole foods — are digested slowly and keep blood sugar levels stable.

Some health professionals believe that eating plenty of low-GI foods keeps you more satisfied for a longer period of time. We advocate a diet of healthy, low-GI foods to stave off hunger, cravings and overeating, and to help prevent unhealthy weight gain and diabetes, heart disease and other serious illnesses.

In general, you can’t go wrong by adding more whole foods to your diet, but you may find that the GI is useful for finding foods that make you feel and look your best.

Your blood sugar rises after a meal in response to the amount and type of carbohydrate, protein and fat contained in your meal. When you eat, your body releases insulin, a hormone that helps to convert sugar into energy.

This is an important process that easily goes awry when you eat high-GI carbohydrates that cause a more dramatic rise in blood sugar. Instead of a healthy amount of insulin, an “army” of insulin is secreted in order to normalize blood sugar levels.

Several factors determine a food’s GI value. Refined grains that have had the bran and germ removed, including white flour and rice, are higher GI than whole grains, and foods with more fiber usually have a lower GI because fiber is not quickly digested. The type of starch in a food also affects its GI because some are broken down more easily into sugars. (That’s why some potatoes have relatively high GI — their starch is digested quickly.)

The riper the fruits and vegetables, the higher their GI values because they have more sugar that is easily absorbed. Meals with fat or protein also slow the digestion of carbs and have lower GI values.

Eating a low-GI diet means choosing plenty of whole grains, beans, nuts and fruits and vegetables, but beyond this general guideline, the GI concept may seem confusing. Are all “good” carbs equal? Is an apple the same as an orange? Is brown rice better than whole wheat bread?

Most fruits are not high-GI, except for tropical fruits such as banana and papaya, and dried fruits such as dates and raisins. These are the only ones to be sure not to overeat and to combine with a protein-containing food such as nuts, plain yogurt or hard boiled egg (remember that combining carbs with protein and fat slows digestion and keeps you full longer).

Fruits also have a surprisingly smaller effect on blood sugar than white potatoes, brown or white rice, and all other grains except for barley. Eating fruit also is a great way to diffuse the cravings for sugar and carbs that may occur if you reduce your intake of processed and refined foods.

You can indulge in summer berries, cherries, peaches and other stone fruits without worry!

Interestingly, not all varieties of certain foods have the same glycemic effect. A white (russet) potato has a much higher GI than a new potato, for example, and a sweet potato elicits an even lower insulin response. Of all grains, barley causes the smallest blood sugar response, so a serving of steamed barley theoretically keeps you feeling full longer than a serving of rice or a slice of bread.

What does the research show?

It’s difficult to carry out long-term studies on diet but research does suggest that diets full of low-GI foods are more beneficial for health. Studies have shown that low-GI diets prevent excess weight and type-2 diabetes, while diets rich in high-GI foods are linked to an increased risk for diabetes, heart disease and obesity, as well as macular degeneration, infertility and colorectal cancer.

Some research does support the idea that low-GI diets are effective for weight loss. One study at Children’s Hospital in Boston showed that children on a low-GI diet lost significantly more weight than those on a low-fat diet and another study showed that rats fed a high-GI diet for four months increased their body fat by 71 percent more than rats fed a low-GI diet.

The Nurse’s Health Study also found that women who ate the most high-GI foods had a 50 percent greater risk of diabetes than those who ate the least. Other studies have shown that people feel less hungry and eat fewer calories on a low GI diet vs. a low-fat diet, confirming the theory that low-GI foods prevent overeating by making us feel satisfied more quickly.

Not all health professionals, however, are convinced that eating low-GI foods is essential. Some studies have found that eating a diet of low-GI foods has little effect on weight or health, especially for people who already are lean or active and metabolize carbs quickly.

Critics say the GI concept doesn’t account for the way people typically eat several different foods at each meal. Fat and protein in a meal slow digestion, which decreases the effect of carbs on blood sugar. A Danish study found that the total calories in a meal — not its GI value — was the only way to determine the affect on blood sugar levels.

Another criticism of the glycemic index is that the amount used to test the GI of certain foods often is not a typical serving size. Watermelon has a high GI value for example, but a single serving has very few carbs. For melon and other foods, the GI is not a good predictor of the affect of the food on blood sugar levels.

That’s why another measure called the Glycemic Load (GL) is more useful. It takes into account both the amount of the carbohydrate and its impact on blood sugar levels. While the GI value of watermelon is high, the GL value is low — so it can be eaten freely, as long as you eat a modest amount! Generally, a GL of 20 or more is high and 10 or less is low.

If you want to check the GI values of your favorite foods, a comprehensive list was published in 2002 in the American Journal of Clinical Nutrition. The University of Sydney also has a searchable database at www.glycemicindex.com.

The GI/GL is meant as a resource to guide your food choices, so there’s no need to play a numbers game when deciding what to eat. If you avoid sugary and refined foods and instead eat a wide range of whole grains, beans, legumes, nuts, fruits and vegetables, your diet will be low-GI naturally!

Eli Penberthy is the Sound Consumer’s associate editor and a public affairs specialist.

Barb Schiltz, R.N., M.S., C.N., has a private nutrition counseling practice and was instrumental in developing a low glycemic index dietary program for clinical research studies. She also is a contributing author of “The Ultimate Metabolism Diet: Eat Right for Your Metabolic Type,” by Scott Rigden, M.D., Hunter House, 2009.

Insights by Goldie: Knowledge is power: We hold the key to sustainable food

The Cornucopia Institute recently released a new report: Behind the Bean: The heroes and charlatans of the natural and organic soy foods industry. It aims to address the “social, environmental and health impacts of soy,” and to “lift the veil on the widespread importation of soybeans from China and the processing of soy foods labeled as ‘natural’ with toxic chemicals.”

This month PCC’s community relations department is sponsoring another Bicycles for Education drive. Our goal is to collect 900 bicycles and to help recruit 100 volunteers to prepare the bikes for shipment.

Notes from the Cellar: Euphemisms, tall tales and outright lies