This article was originally published in April 2005 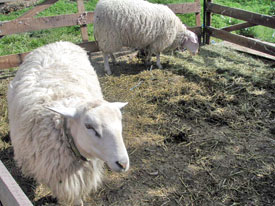 (April 2005) — Sally Jackson manages the three large pots atop her wood-burning stove. She is a slight woman of small stature, but possesses the radiant energy of one who makes her living in close communion with the outdoors.

Sally has been making cheeses for 30 years, initially using the milk from a modest herd of two goats and one cow. Sally and Roger Jackson’s secluded farm near Chesaw, Wash., has grown since then — with up to 16 goats, 45 sheep and four cows — and so has Sally’s reputation for making great cheese. Licensed as a business since 1979, Sally Jackson Cheeses now distributes to stores and gourmet restaurants all over the country.

Sally’s daily routine includes an early start at 5 a.m. to stoke the fires in the stove. The previous evening’s raw milk from her cows, goats and sheep must be heated before the cultures and rennet are added to separate the curds from the whey. The curds are then placed into molds lined with cheesecloth and allowed to drain before they are transferred to the drying room. She works with the deft movements of someone used to this daily ritual. Sally says her process is simple, but it takes patience and experience to really get the feel of it. 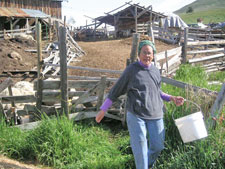 Sally Jackson on the farm — a profile of low-tech sustainability.

“A lot of people think you can learn to make cheese from a book,” Sally says. She nods down at what is written on her black and white cow-print apron, a gift from a friend. Printed in large bold is ‘WSU,’ indicating the Washington State University course offered in cheese making. Though she has never enrolled herself, Sally says that the WSU course is too ‘big and scientific,’ teaching students to measure the exact acidity levels, add cultures at prescribed times and constantly monitor the temperatures of each stage.

“They certainly never get their hands in it,” she says, as she scoops one arm down into her pot with her strainer and transports the separated curds into the cloth-lined ceramic molds. “But it’s one way to make cheeses, I guess.” Sally’s way is more of an inexact science, relying heavily on personal experience, adaptation to circumstance, and intuition to arrive at her final product.

The Jacksons operate their dairy farm with limited aid from new technologies. What has been added was a necessity from growing demand. Forget about online ordering forms. All orders are still taken by mail or more recently by phone.

Although they have been selling their cheeses for 25 years, Sally and Roger Jackson didn’t have electricity until 12 years ago. “In the beginning we didn’t have it because we were environmentalists,” Sally says. 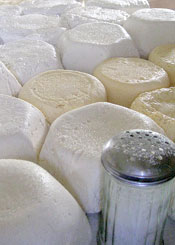 They ran a generator, but the pile of oil cans grew and the noise became unbearable, and it didn’t make sense to maintain it. Now, other than lighting, having electricity allows Sally and Roger to run one small window air conditioner in the aging room of the cheese house and to refrigerate the milk from each evening’s milking. Sally still loses some wheels of cheese to the heat and accelerated ripening, but not nearly as many.

Though Sally is in charge of the actual cheese production, her husband Roger works to keep the farm in order. Sally says when you live the life they do, it is easy to forget about feminism. “Things on a farm get divided back into the old ways and [cheese making] is what I like to do.”

Roger was responsible for building most of the structures on their farm — a creative exterior mixture of new and recycled materials and variable metal roofing. Roger points off to the left and to the right, indicating two separate black-earth fields. He has just tilled them to prepare for oats and alfalfa.

This is dry-land farming in the Okanogan highlands; the Jacksons do not use irrigation. Because of their growing herd size, Sally and Roger must bring hay and grain in from outside sources to supplement their feed, which can be financially difficult.

Cheese wrapped for ripening in the aging room.

Roger hopes that the rain will fall and his own crops will grow. Then his animals will again be sustained partly by food grown on their own land.

Sally and Roger collaborate with local farms to obtain most of what they need. Instead of a rind for her two-pound rounds, Sally uses chestnut and grape leaves as her signature wrapping materials. She acquires chestnut leaves from the grove of a local man who has spent years cultivating chestnut trees of his own. The grape leaves are harvested from one of the many vineyards in the area.

To help bring shape to her cheeses, Sally has enlisted the help of a potter friend to create sets of ceramic hexagonal and round molds. Sally and Roger also contribute by donating their leftover nutrient-rich whey to local farms, creating a loose and informal barter system. Luckily, Sally and Roger have never had to put energy or resources into marketing their product, a real boon for a small artisan business. Sally Jackson’s cheeses speak for themselves. Reputation alone has made their company into a self-sustaining entity.