Paper, plastic or cloth — What kind of bag do you use? 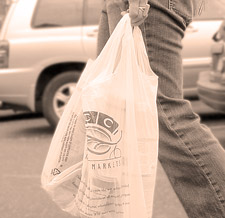 (January 2005) — Paper or plastic? Which type of bag is more environmentally sound? Is it better to cut down old-growth trees and tropical rain forests to make paper, or is it better to use oil to make plastic bags that choke animals, clog sewers and aren’t biodegradable?

PCC shoppers surely are among the most ardent environmentally conscious shoppers in the nation, and some of you have written and called to make your views known about this debate. It’s good that you’ve called and written; it shows you care enough to ask tough questions and that this dilemma is on your mind.

But the truth is that neither paper nor plastic is a good choice. Both extract an environmental toll and both entail social costs.

PCC management has spent many hours studying the problems with paper and plastic bags, looking for a better solution. The best answer, the most honest one, is that it’s time for each and every shopper — that’s you and me alike — to rethink and rephrase the debate. Paper, plastic or cloth? Which do you use? As PCC Merchandiser Paul Schmidt puts it, “If we all do our part, the need for paper and plastic can be eliminated altogether — by using cloth bags.”

Before you’re asked to choose between paper and plastic at the checkout counter, think about purchasing a reusable and totally biodegradable canvas tote for your groceries.

One shows the PCC logo and retails at $4.99 ($4.49 if purchased on member discount days), which barely covers PCC’s cost.

The second canvas tote is made for the PCC Farmland Fund and bears the fund’s logo. It’s made of 100 percent certified organic cotton and retails at $9.95.

Reuse your bags for a rebate, or donate!
For every bag you bring in to reuse for your own groceries, PCC automatically donates two cents — one cent to the Cash for the Hungry neighborhood food-bank program, and another penny to the PCC Farmland Fund, a non-profit land trust that saves threatened farmland.

Or, if you prefer to keep the two cents, just tell the cashier you wish to keep the rebate.

The problem with paper
The most common complaint about PCC’s paper bags is that Weyerhaeuser makes them. Why, some of you ask, is PCC supporting Weyerhaeuser, a company known to be cutting trees from old-growth areas and rain forests? The Rainforest Action Network (RAN) has called Schmidt several times, urging a review of Weyerhaeuser as a supplier.

Schmidt has taken the lead in reviewing PCC’s purchasing agreements and is working with RAN to find an alternative supplier. He reports that there are three major U.S. companies that make grocery bags — Weyerhaeuser and two other companies based in the Southeast.

The two other companies buy off the spot market, meaning there’s no guarantee of where their trees are coming from to make paper bags. Genetically engineered (GE) poplar trees are believed to be one source, but the location of GE plantings are kept secret from the public and that makes the source virtually impossible to trace. Also, because these two other companies are based in the Southeast, more fuel and more raw materials are used to transport the finished product to the Northwest.

Weyerhaeuser, meanwhile, is said to be the only major paper bag manufacturer that relies on its own forests for raw material. Published documents show the percentage of trees that Weyerhouser cuts down in Canada (where it has received several awards for sustainable forestry practices), is less than 2 percent of the total acreage owned, but it still includes old-growth timber.

Another issue with paper bags is the amount of post-consumer recycled content they contain. Schmidt says Weyerhaeuser bags contain approximately 43 percent recycled content, while the two other companies are refusing to quote the recycled content in their product — although it reportedly can vary from zero to 90 percent.

However, neither of the other two companies can produce paper bags for PCC. They can earn more money making boxes than bags, and the machines that make the outside portion of corrugated boxes are the same ones that make paper bags, so they’re not converting to bag production.

Schmidt’s conclusions on the problems with paper bags: there’s no gain in purchasing paper bags from the Southeast because of the uncertain source of the trees, potentially less recycled content, and the use of more energy and materials to transport them. Additionally, PCC would pay 20 percent more for paper bags from the Southeastern companies, even if they could supply us. It’d be a lose-lose situation all around. That leaves PCC buying bags from Weyerhaeuser.

The problem with plastic
The majority of all plastics today are oil-based. There are some attempts underway to make plastics from a cornstarch base, but so far these products can’t hold up under the weight of groceries; they’re brittle and break through from sharp corners, and they’re made from genetically engineered corn. Some experimental work also is being done to genetically engineer plants to produce bioplastics, through so-called biopharming (see Sound Consumer, A primer on biopharming)

Schmidt is currently looking at one more plastic bag option: an “OxoBiodegradable™ plastic bag made by EPI Environmental Products Inc. EPI claims its plastic is 100 percent degradable with no harmful residues, but PCC later determined it only breaks up into very small bits of plastic but does not truly biodegrade.

Conclusions
Schmidt points out that new technology is developing every day and bag technology is one of the fastest-growing sectors. He’s been searching for alternatives, getting samples and checking them out. As soon as he’s confident that there’s a good alternative to what PCC is relying on now, he’ll make the switch. That time could come soon, as Schmidt is sensitive to the environmental costs and the need to find another way.

Consider this, too: PCC spends about $150,000 a year to buy shopping bags — about 1.2 million paper bags and 1.5 million plastic bags. Of those, customers brought about 400,000 of them back to stores to reuse for their groceries — less than 15 percent of the total. And that’s despite a longstanding PCC program to provide a two-cent rebate for every bag customers bring in for reuse.

Plastic bags may be recycled and all PCC stores have recycling bins for them. But the vast majority winds up in landfills.* Both paper and plastic bags disposed of in a landfill can be dug up virtually intact many years later; neither decomposes well in a landfill.

Which brings us to us, the consumer. What will it take for us to start using cloth every time we shop? That’s the question each of us has the power to answer. I confess — I have numerous canvas bags, my intentions are good, but sometimes I forget to take them along when going to shop, or don’t have them with me when I make an unexpected stop. This New Year, I’m pledging to bring a canvas tote along as part of my daily routine. After all, it’s up to you and me to make the need for paper and plastic bags go away.

* According to national statistics, only one percent of plastic bags are recycled.

Insights by Goldie: Reflections and resolutions