This article was originally published in September 2004 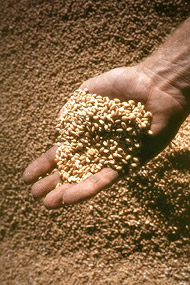 (September 2004) — Biopharm crops are plants that are genetically engineered to produce pharmaceutical drugs and industrial chemicals. The most frequently used host plant is corn, followed by soy, tobacco and rice.

These crops are altered, in some cases with human genes, to produce a variety of products. They include growth hormones, AIDS and Hepatitis B vaccines, a digestive enzyme, an antibody to disable sperm, an abortion-inducing chemical, a blood-clotting agent, and an industrial adhesive. More than 300 field trials have taken place nationwide, some, if not most, in the open air.

The U.S. Department of Agriculture (USDA) has authority over biopharm trials but does not require environmental assessments to determine if experimental traits spread to food-grade crops or related species. It does not reveal the location of field trials beyond naming the state; nearby farmers and the public don’t have to be told.

Federal rules set a one-mile buffer zone between food and biopharm crops, yet pollen from corn is known to drift at least six miles. According to the Union of Concerned Scientists (UCS), USDA allows withholding the name of the gene being added to a biopharm host plant 85 percent of the time.

According to the director of WSU’s Agricultural Research Center, Dr. Ralph Cavalieri, the last one — barley with lysozyme — would be considered a pharmaceutical. “It contains a human gene related to milk,” he says. The human genes are meant to coax a plant into producing a “novel protein” that might be turned into medicine.

As this issue went to press, the scientist in charge of the lysozyme trial reported he had “retracted” his permit, though what that means isn’t clear. Nonetheless, WSU’s plan to become a leader in biopharming poses risks to consumers and the food industry.

Health risks
The UCS says transgenic proteins are potentially hazardous to human health and “such concerns should be made clear to those exposed to the field test sites or those living nearby.”

A report by Consumers Union, the Center for Food Safety and Friends of the Earth explains, “Pharmaceutical proteins generated by inserting human genes into plants, bacteria or other mammals are usually different than their natural human counterparts. These differences may cause the body to perceive them as foreign, resulting in immune system responses.” 2

The report cites evidence from clinical trials where human test patients showed autoimmune reactions. In one, patients began bleeding when their bodies attacked both the biopharm and the body’s own natural growth and development traits. In another for a hormone related to red blood cell production, 160 cases of red cell aplasia (red cell production virtually shuts down) were documented.

The head of research and development for one biotech firm says these immune reactions were a “stunning” surprise and that “nobody saw it coming.” As Consumers Union and the Center for Food Safety emphasize, the point is that the immune system detected a difference that science today cannot discern.

It is to WSU’s credit that it has revealed its transgenic barley trials are occurring “on WSU property.” Dr. Cavalieri adds, “I cannot speak with direct knowledge about individual notification of landowners adjacent to the WSU research farm. But in the past when Jim Cook has been involved, notification and discussion with the agricultural community was his practice.”

Cavalieri emphasizes the transgenic trials are small. The total area planted, he says, is “about 100 feet by 100 feet … The barley we are using is particularly well-suited for minimizing pollen contamination because the reproductive activity occurs within the plant before the head emerges from the ‘boot.’

Thus, while pollination of nearby barley plants is theoretically possible, the biology of this barley’s reproduction, the stage of head emergence and the inability of barley to cross with other cereals make it practically impossible for contamination of other crops to occur.”

The USDA hasn’t done a single environmental assessment to measure the risk of contaminating food crops or related species. The U.S. Food and Drug Administration (FDA) does not assess the health impacts of biopharms getting in the food supply. And while the U.S. Environmental Protection Agency has regulatory authority over biopesticides, such as corn engineered with a pesticide, EPA does not assess biopharms with pesticidal properties likely to disrupt soil ecology.

The food industry is demanding a moratorium on biopharm crops that produce drugs and chemicals. The National Food Processors Association, the voice of a $500 billion industry, argued in a 2003 news release that biopharms present an unacceptable risk to the integrity of the food supply. “The issue of contamination of the food or feed supply is just too great,” it said.

The Grocery Manufacturers of America, the world’s largest association of food, beverage and consumer product companies, wrote the USDA to tell it to stop issuing permits for biopharm food crops. In a July 2004 letter, the GMA’s vice president of Scientific and Regulatory Affairs, Mark Nelson Ph.D., said government rules are insufficient to protect the food supply and that liability from contamination of the food supply — “inadvertent or intentional” — must be addressed.

The GMA says, “The experience in 2000 with StarLinkª taught us that these are not hypothetical risks.” StarLink corn was approved only for animal feed, but contaminated the entire food chain — from processed foods on store shelves to essential seed stocks. Residues of StarLink remain in the food supply today.

“We’ve seen it on the vaccine side,” one Pfizer executive reportedly confessed at a biopharm conference, “where modified live seeds have wandered off and have appeared in other products.”

And consider what happened with ProdiGene®. In 2002, the USDA charged ProdiGene with failing to keep pharmaceutical corn separate from soybeans and corn in Nebraska and Iowa. The company was fined and had to destroy half a million bushels of soybeans destined for infant formula and veggie burgers — contaminated with traits for a pig vaccine.

Prodigene didn’t have the cash on hand to remediate the violations, but got a low-interest loan from USDA to pay up. Prodigene reportedly has 85 permits for experimental open-air trials of biopharms and chemical crops in at least 96 locations.

It’s important, finally, to note that after all the industry promises and hundreds of biopharm trials dating back to 1991, not one biopharmaceutical has been approved for human consumption. Meanwhile, more than 100 pharmaceuticals produced in traditional biotech fermentation vats already are helping people in need.

Letters to the editor, September 2004