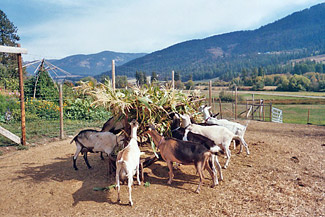 In Rice, Wash., the Misterlys’ Nubian and Alpine goat heard fuel up to provide milk for hand-crafted Quillisascut cheeses.

Two staff members from PCC Fremont take a week-long retreat to study the arts of small-scale farming, seasonal cooking, and the making of artisan cheese — a story of self-sufficiency and sustainability.

(January 2005) — Artisan cheese making always has been at the forefront of Washington’s sustainable agriculture movement, and for nearly 20 years, Rick and Lora Lea Misterly have been working to keep that movement strong.

Using sustainable practices on their farm in Rice, Wash., the Misterlys — owners of Quillisascut Cheese Co. — have been making some of the best farmstead goat cheeses anywhere since 1987.

Rice is a small community in the northeast corner of Washington state along Roosevelt Lake, which was created by the damming of the Columbia River. Dry grass and conifers cover the area’s rolling hills, where homes dot the landscape. The arid climate is more forgiving here than in areas to the south.

Rick and Lora Lea moved to Rice from Republic, Wash., in 1981. The first few years were rough, but in time they built a barn and house, dug a well, installed the plumbing and wired the place for electricity.

They started with one goat, an Alpine that provided them with milk. From this, Lora Lea began making cheese — much like her mother had done for her family and friends for a little pocket money when Lora Lea was a girl. Today the Quillisascut herd, a mixture of Nubian and Alpine breeds, has grown to about 36.

The work starts early
Rick and Lora Lea milk the does (the female goats) every day at 5 a.m. Each goat has a clever name — Mocha, Ivy and Cupcake — and the animals queue up in the same order every morning. First they’re brushed and their udders are cleaned, then they’re given a bucket of grain to keep them busy during the milking. They are calm.

Like the goats, the barn fowl are aptly named, and the roosters make a round robin of the 5 a.m. cock-a-doodle-do contest. One of the loudest cocks is named for his shrill cry. He sounds like he’s screaming “Dr. Harold” when he lets out his early-morning salutation.

The Misterlys built their cheese-making facility onto the side of their house. The cheese process begins while the milk is still warm from the goats. Lora Lea takes a low-tech approach to producing Quillisascut’s incredible cheese.

She makes several different styles: a Montrachet; a Crottin; a mold-ripened wheel called UFO; and an aged cheese called the Curado, which also comes smoked or flavored with lavender and fennel or chipotle. The Viejo, an extra-aged Curado, is wonderful when grated over a garlicky marinara sauce made with roasted red peppers.

The Ash Tome is a smallish rustic disc, slightly sunken in the middle with a raised edge and dusted black with vegetable ash. When cut into wedges, a bright white paste is revealed, surrounded by a thin black border. With the texture and taste of a firm chevre, Ash Tome is at once mouthwateringly tart, creamy and chalky.

The Curado wheel, which has a natural rind, has a mellow sharpness and well-rounded goat flavor that leaves a long finish. Both cheeses are great with crisp Cameo apples and Riesling wine.

Rick and Lora Lea produce most of the Quillisascut cheese in the spring and summer, when the does are no longer milking their kids. “We believe that our desire to remain small, as well as the nature of our surroundings, is well represented in our cheese,” Lora Lea says.

A visit to the farm

Rick began selling Quillisascut cheese to high-end restaurants in the Northwest, and PCC has been selling it since Rick made his rounds in the city. He’d show up fresh from the farm, with errant straw sticking from his pants pockets.

The Misterlys sell their cheese to places that share their values: local, organic and sustainable. They also teach what they practice. Three years ago, they opened their home and farm to culinary students and professionals for week-long retreats. Attendees take part in all aspects of farm life: they milk the goats at dawn, tend the organic garden, preserve food, feed all of the animals, make cheese, and cook and share meals.

During our visit in the fall, we planted a garlic patch. One must pass through the goat pen to get to the garden. Rick has a Border collie pup, Jet, who kept the herd at bay when we carried armfuls of harvest through the pen and back to the house.

With the beginning of breeding season, the pen was a lively place. The billies (the male goats) had just been let into the pen with the does. The area was filled with the scent of goat pheromones (a scent not unlike goat cheese) and the sounds of goats bleating.

The rest of the property has various fowl that roam the grounds — ducks, quails chickens and turkeys that like to show off and be held, unaware of Thanksgiving plans.

Since all the ingredients for the meals during our retreat came from the farm, our experience was an exercise in seasonal cooking and creativity. Chef Karen Jurgensen was on hand to facilitate the menus, letting us know what we needed that day.

The bounty on hand would make any foodie’s mouth water. The larder is stocked with foraged wild mushrooms, fresh meat from the farm (harvested by us), duck confit, preserves, fresh herbs, quail eggs, lamb demi-glace, eight-pound chickens — and of course the freshest goat milk and goat cheese.

After dinner, Lora Lea leads discussions aimed at understanding sustainability, as well as how we can implement it in our lives and kitchens when this special time on the farm comes to an end.

For more information about the 2005 Culinary Retreats at Quillisascut Farm, go to www.quillisascutcheese.com.

Insights by Goldie: Reflections and resolutions