If you had to pick one ingredient to keep an eye on when selecting foods in 2016, I would suggest reducing your intake of added sugars. The average American consumes 75 pounds of sugar each year — that translates to almost 1/2 cup of sugar each day!

Sugar is the new cholesterol

For decades we were told to avoid butter, eggs and foods with cholesterol and dietary fat, while sugar enjoyed a free pass with no specific recommendation or even a Percent Daily Value on nutrition labels. Today’s more progressive nutrition educators now suggest it is more important to avoid foods loaded with added sugars than foods high in fat. Even the group that creates the Dietary Guidelines for Americans recently suggested we stop worrying about dietary cholesterol or total fat. Instead they suggested setting a new limit on the amount of added sugar we should consume each day.

How much is too much?

The World Health Organization suggests we limit our sugar intake to 5% of total calories, which translates to a maximum of 6 teaspoons of added sugars per day. You may be surprised to learn you can get more than 6 teaspoons of sugar in a single serving of flavored yogurt or just 8 ounces of soda. You may not be surprised to learn most Americans consume four times that recommended amount. As a result, avoiding added sugar is a great idea for anybody concerned with their health. The Food and Drug Administration is considering a proposal to require food manufacturers to disclose how much sugar they are adding to packaged foods. The FDA also is proposing to set a Percent Daily Value at 10% of total calories, but these changes won’t appear on food labels for several more years. 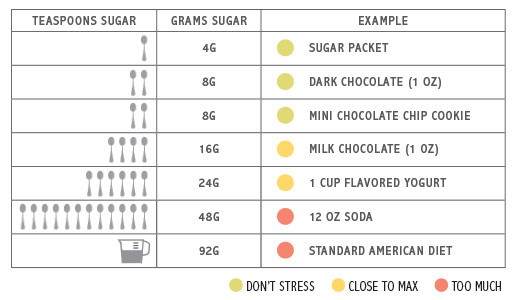 Get tips on how to avoid added sugar. And learn why we crave sugar during the winter months.