The Sumo orange is a new citrus star

If citrus fruits could strut into stores on celebrity red carpets, the shiranui would certainly be at the front of the line.

Don’t think you’ve heard of it? That’s because you probably only know it by its stage name, Sumo Citrus. (The generic version is also known as a dekopon.)

The large, distinctive mandarin, originally from Japan but now also grown in California, has arrived in a growing number of American grocery stores the past few years for a short selling season that starts in January and ends in April. It’s also been the star of splashy marketing campaigns, as its main distributor, selling it under that trademarked Sumo Citrus name, has worked to introduce it to consumers across the country and build its popularity.

For starters, “It has a very sweet flavor, and it’s a very large piece of fruit,” said Sunnia Gull, director of marketing at AC Foods, the Dinuba, Calif., company that owns the Sumo brand.

Plenty of science and years of cross-breeding and cultivation went into that sweetness. The fruit’s been bred to have a much higher sugar-to-acid ratio than other types of mandarins. It’s also seedless and easy to peel.

Why the Sumo name? It came from the large size, combined with the distinctive knob at the top (reimagined in the minds of its marketers as more of a topknot), together with its Japanese origins.

For all its benefits, the growers who work with it behind the scenes are the first to admit that the shiranui is also more than a bit of a diva.

The soft, bumpy rind bred for easy peeling needs pampering and protection even while the fruit is still on the tree, requiring careful pruning to get the amount of sunlight just right, according to Gull. Sumo growers are so worried about exposing their darlings to too much sun, in fact, that they protect them with a powdery citrus sunscreen of sorts that needs to be applied to each fruit during the hottest summer months.

The Sumos are then picked by hand and tucked into small totes rather than the massive bins typically used in citrus harvesting. Next, after transport in special air-ride trailers meant to prevent a bumpy ride, the Sumos arrive at a packing house where, as Gull described it, “there is no automation involved in packing the fruit.” And that’s all before the mandarins have even begun the second leg of their journey, the trip to the store. 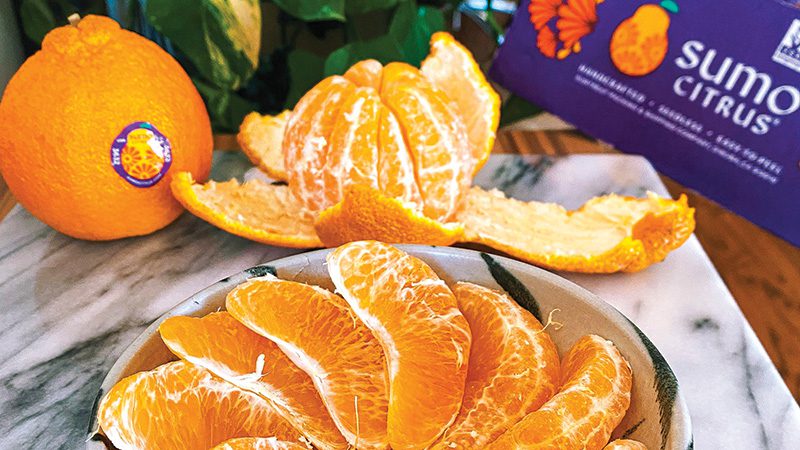 It’s a labor-intensive process that helps to explain why shiranui mandarins tend to cost more than many other oranges and tangerines. Back in Japan, where they’re popular enough that they’ve even been offered as a Hi-Chew candy flavor, their higher price tag might not matter much to consumers accustomed to regarding many fruits as luxury items. The premium raises more eyebrows among American consumers and adds a complication to the already scant supplies of organic versions of the fruit.

Price isn’t the only barrier: “Pests love citrus in general, and they especially love these,” said Gull, whose company currently offers only conventional Sumos. The company might eventually offer organic Sumos as well, she said. But work on an organic crop is a slow process, given that the trees take five years to mature to the point of bearing fruit.

PCC will be a rare spot to locate organic shiranuis this year. Organic fruits grown at the Temecula, Calif., citrus ranch En Divina Luz, will be on sale alongside conventional Sumos this winter, according to PCC Senior Produce Merchandiser Kevin Byers. But finding other organic suppliers to work with has been a challenge.

Other citrus growers are eager to bring their own organic shiranuis to market, said Craig Morris, category director for citrus and grapes at Homegrown Organic Farms in Porterville, Calif., but their starter crops are not ready for commercial production yet.

“The dekopon is an extremely difficult and complex tree to grow correctly,” Morris said. “And organically, we have very few tools to work with.”

Even if the pests can be kept in check, there is that matter of the painstaking pruning, which can start to feel as tricky, Morris joked, as expertly shaping a bonsai tree. Given all the care they require, he added, “You don’t grow them by the acre. You grow them by the tree.”

Still, Morris sounds optimistic that his organic growers will have a crop of their own to send to stores before too long. And customers will want to buy them when they do.

“They have an incredibly unique flavor profile,” he said. “They’re so sweet and aromatic.”

“And their texture!” he added, beginning to sound a little star-struck himself. “Even peeling them and segmenting them is an experience.”

It’s no wonder, he added, “they’ve developed a cult following.”

Camela Zarcone is a Seattle writer and cooking instructor.

Use citrus to spark up the menu with Mediterranean Winter Dinners with Zola Gregory.

Citrus flavors go far beyond lemon and orange. This winter’s options (with descriptions by PCC supplier Organically Grown Company) include:

African Shaddok: The largest fruit in the citrus family, this thick-skinned pummelo (a relative to the grapefruit) has a meaty texture with a pleasant, subtly sweet grapefruit flavor.

Buddha hand: This long-fingered citron is tremendously fragrant. It can perfume a room, and its floral zest can be used in any recipe that calls for citrus zest.

Calamondin: This small, sour, bright-orange citrus is a cross between a loose-skinned mandarin and kumquats. Its peel and flesh are both edible. It is sweeter than a lemon, like a kumquat with a more assertive bouquet, and is delightful in marmalade, preserves and cocktails.

Lemonade lemon: This round, juicy, super-sweet lemon, a hybrid with a Naval orange, can be eaten out of hand like an orange. The sweetness is due to lower acid, not higher sugar levels.

Lee nova mandarin: The “sugar bomb” of the mandarin family.

Makrut lime: A popular ingredient in Asian cuisine, particularly in Laos, Cambodia and Thailand. Its peel is rough, pebbled and filled with essential oils, and its fragrant zest is indispensable in culinary applications.

Mandarinquat: This bite-size cross between a mandarin and a kumquat can be eaten whole—sweet peel, tart flesh and all.

Mango Valencia: This mild, low-acid orange has a vanilla finish that tastes like a mango.

Seed “libraries” and a “B-Patch” community garden are among PCC’s latest grant recipients.

Meet Jamil Bates from the Edmonds PCC and Robert Jones from the Downtown PCC!

Sustainability Report: From baguettes to breadcrumbs

A new partnership “upcycles” leftover artisan breads instead of composting them.