The plants began the S’Klallam Connections Garden at Heronswood Garden in Kingston, a world-renowned nursery that had fallen into disrepair. The new garden is part of an overall renaissance led by members of the Port Gamble S’Klallam Tribe (like Purser), planted on land historically occupied and currently owned by the tribe, for the purpose of linking members with the traditional uses of plants.

“I literally got a tear in my eye,” Purser said of seeing the bird above her. “It was like I was doing the right thing.”

Thirty-five years ago, a pair of passionate collectors opened Heronswood to display plants collected from around the world, drawing visitors and praise for its rare compilation. Then, in 2000, a seed company bought the 15-acre property shortly before going bankrupt, leaving Heronswood unmaintained for years. The S’Klallam purchased the property at auction in 2012, spending the last 10 years restoring its glorious global collection. But, says Purser, who works at the garden as volunteer coordinator, “As much as they’ve done to preserve it, we really felt that we should be in the forefront, that our culture should be shared here.”

More specifically, she wants it to be shared with the S’Klallam themselves.

“With boarding schools and all the colonization,” says Purser, many elders were trained to hold tightly to tribal knowledge and hold it closely as secrets. “Now that it’s more acceptable and we’re getting our voices back and getting to get our culture back, it doesn’t feel right to them to tell.”

She worked with Heronswood Garden Director Dr. Ross Bayton to design the S’Klallam Connections Garden and with the tribe’s Cultural Department to identify and collect appropriate plants. As with the plants in the nearby Traveler’s Garden, which represent Chile, Vietnam, and the U.S., it showcases the significant plants to the S’Klallam, but with the added benefit of a gathering space and hands-on learning area for the tribe—including pits for fires, salmon, and clambakes. “A lot of our culture has been lost,” says Purser. “We’re really hoping that this will be a way to help everybody get that connection again.” 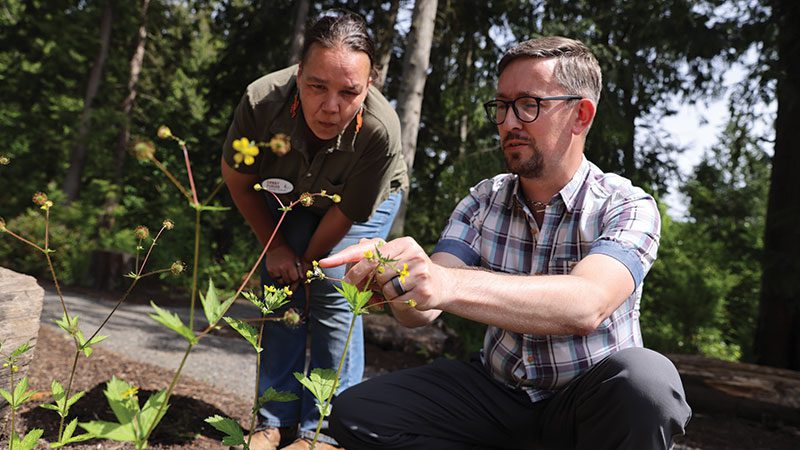 That started with Purser herself, who called the process “A crash course in my culture and gardening.” She picked soapberries in hopes of propagating her own plant and joined people from tribes around the region to learn how to harvest camas, an edible root and staple of Pacific Northwest Indigenous cuisine.

In front of the Connections Garden sits the meadow, with yarrow, chocolate lily and camas. Tribes traditionally managed camas meadows by burning them. “We want to do that here,” says Bayton. “But we will have to negotiate with our neighbors.” Fire prevents tree seedlings from encroaching and turning meadow into forest, while also reducing the vigor of the grasses, encouraging other plants, like wildflowers, more opportunity and creating a more diverse landscape. The ash then feeds the soil, encouraging new shoots to grow, enticing deer and elk to nibble and create a fertile hunting ground. “If I do my job and do it right, we’re going to get deer,” Purser says. Though they’d never had deer come to the garden before, within months of starting the Connections Garden, they saw tracks and nibbled bushes.

Bayton was less enthusiastic about other traditional methods of the S’Klallam. “It’s making me itch not to pull it out,” says Bayton, spying what he normally would consider a weed. “As gardeners, our instinct is just ‘reduce, reduce, reduce.’” However, while they don’t want the garden overrun, plants such as young dandelions and cleavers feed and heal the S’Klallam, and thus deserve a place in the garden. The cleavers, a European plant that the tribe incorporated over many years for relieving nettle stings, also demonstrates that the garden centers on the S’Klallam’s use of plants and nothing else. It’s not a native plant garden, though many of the plants they use, naturally, are from the region. Nor is it a “first foods” garden. It has medicinal plants like devil’s club and ones like cattails, that are used for weaving, part of the overall impetus to connect S’Klallam to as much of their culture as possible. 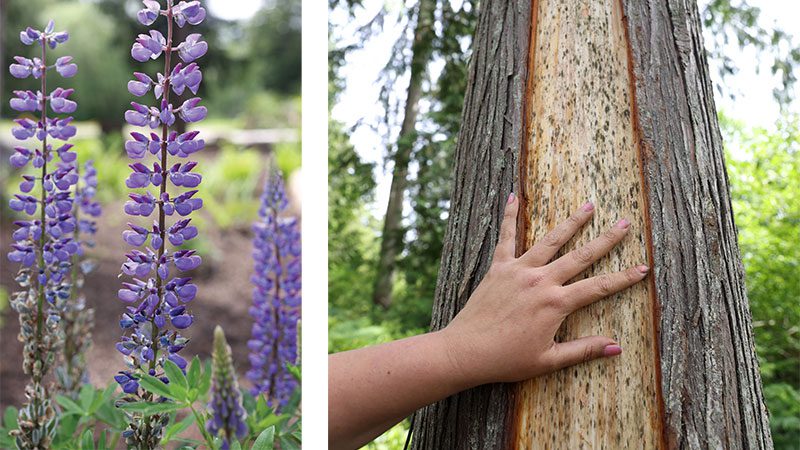 Lupine (l) and cedar tree with a fresh cut (r) in the S’Klallam Connections Garden.

The weeds helped fill in the garden in the early stages, because Heronswood made a conscious decision to open the garden immediately, rather than wait until it was more polished. “We wanted [visitors] to go on the journey with us,” says Bayton. The idea for the garden came last September; the first plants only went into the ground in April. By the end of this year, they plan to have the clam, salmon, and fire pits ready, and in the next few years a complete building with event space. “It would be great to be able to see the grandmas and great aunties and uncles here with babies,” Purser says. Meanwhile they are hosting classes for tribal members, like a four-part one on mountain goat hair weaving.

Purser’s excitement about the project shows the most in the educational aspect of the garden. Practicing their traditions had been legally and culturally prevented for so long that she and many S’Klallam feel they barely know their own culture. Before they can share it more widely, they want to make sure their own people know it first, so she looked for ways to signal exactly for whom the garden was designed.

She points out a cedar tree with a fresh cut, a rectangle that comes to a point at the top. “We really don’t want it to be signs everywhere and have it be Disneylandy,” says Purser. But while she knew that they needed some signs for the public, she and the Cultural Department used traditional methods to strip this piece of bark and will use it to create cedar roses as gifts for events, something people often give out at pow wows, funerals, or other ceremonies, she explains. The raw patch eventually heals, but for years to come, it will serve as a subtle but powerful symbol to the S’Klallam: in this garden grows their culture and a renewed connection to it.

For more information or to arrange a visit heronswoodgarden.org.

Cauliflower mac and cheese? A salad bar stocked from the school’s own farm? Nearly 15 years after state legislation supporting “farm to school” cafeterias, see how one Washington district has navigated the “three legs” of a successful school lunch.

Grand Central Bakery’s origins are baked into Seattle’s food history. Now the famed bread makers are among a handful of mission-driven food businesses working to make sure their legacy and values will continue long-term.