Mike Shriver of Rent’s Due Ranch, photo by Meryl Schenker

On a small family farm in Royal City, Wash., population 2,293, Santos and Zanaida Guadarrama start off the spring growing season with organic asparagus.

The crop is a Washington symbol and loved by Royal Produce regulars—but organic asparagus is challenging to grow and labor-intensive to harvest, requiring daily attention. Last year, even working nonstop, the couple had to till some of the crop back in the soil.

This year, there’s new help: a solar-powered, foot-operated “picking assistant” that can be operated by a single worker. The Guadarramas hope the machine, purchased with the aid of a PCC Organic Producers grant, will help the farm transition to a new era. It’s more efficient, ergonomic, quiet and environmentally sound than the two-person diesel tractor team it replaces.

Royal Produce is located halfway between Seattle and Spokane, selling a variety of vegetable crops at farmers markets in Wenatchee and Moses Lake. It’s not a PCC supplier. But the 3-year-old grants are meant to support organic farming regardless of whether the businesses have any other connection to the co-op.

This year, six grants totaling $25,000 represented small as well as large businesses in all corners of the state. In most cases, even a small dollar amount makes a difference that brings farms to another level and supports long-term preservation of organic products, said Aimee Simpson, PCC’s director of advocacy and product sustainability. While PCC has separate “Diverse Entrepreneurs” grants, the grants committee also considered whether applications would benefit historically marginalized or underserved communities and people, another co-op goal.

“We put our money where our mouth is and we walk our talk, we’re not just supporting farms that help us,” said Kevin Byers, PCC’s produce manager and a grant committee member. “I don’t know anyone else who does this.” 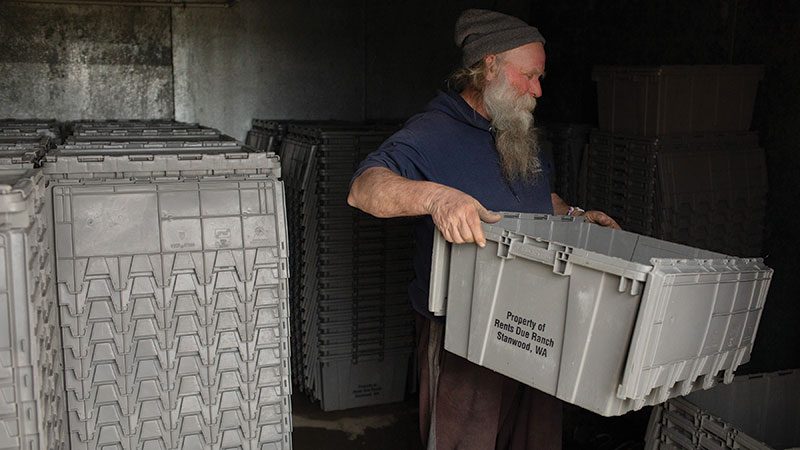 Mike Shriver of Rent’s Due Ranch, photo by Meryl Schenker

One of the region’s first organic farms and a PCC supplier since 1982, Rent’s Due Ranch provides an “astounding” quantity and variety of vegetables for a family farm, said Byers. It was founded on just a single acre of produce—by a couple growing food for their family—then began selling just lettuce to the co-op. Now, though, the 60 to 70 different organic crops grown for PCC on its 60 acres ranges from kale to corn, spring peas to winter squash. Founder Michael Shriver and his crew spend the winter propagating organic plant starts in greenhouses—their vegetable starts are also sold at PCC for the region’s gardens— then they tend crops in the fields.

Since the early 1990s, the vast majority of Rent’s Due deliveries have used reusable plastic crates rather than single-use or disposable containers. It’s an expensive investment that pays off in environmental benefits.

The totes are unloaded at PCC, stored, and sent back with drivers on the next delivery to refill again—the sort of “closed loop” system that PCC is encouraging for packaging. The Organic Producers Grant will help the farm replace its aging and cracked totes.

The replacements will prevent more than 27,000 disposable packages from going to landfills, by farm estimates.

Just about anyone who has tasted the sweet Albion strawberries grown at this 7-acre berry farm makes a mental note to look for crops from Pablo Silva and Maura Vasquez. Both were raised in agricultural families, immigrating to the United States from Mexico. Frustrated with the “toxic spraying practices” of the strawberry farms where he first worked here, Silva wrote on the farm’s web page, the husband-wife team committed to organic farming.

“We know how many chemicals are used in conventional farming. We know how much harm is done to us, the family, and the environment,” they wrote in the grant application.

After working as key managers at Bow Hill Blueberries for many years, they began growing their own organic strawberries, raspberries and blueberries in 2016, selling them through farmers markets and the Puget Sound Food Hub. In 2019 they bought their own land.

The farmers planned to add another 3 acres of organic strawberries to the farm this year, using the grant funds toward a cultivator. That would control weeds without the need for plastic mulch, as well as improve yields by cutting the plant “runners” and reducing the time needed for expensive and laborious hand-weeding. It’s more environmentally sound, they said—plus more efficient, a crucial improvement for a small organic farm.

They wrote that the cultivator “is a perfect example of how investing in the right equipment can lead to significant savings over the long run.”

Long Hearing Farm is small and relatively new, but it’s already made an outsized impact. The rural workers co-op and farm has made organic, culturally appropriate food more available to the people it serves, from schools to food banks to tribal food programs. With the PCC grant, Long Hearing will purchase an electric harvester for salad greens, expanding production and picking greens more quickly and safely.

In 2021 the farm harvested 150 to 200 pounds of salad greens per week; the new machine can pick 300 pounds per hour with less risk of worker injury. There’s a cascading effect to that work: helping the farm become more profitable and efficient will help it increase its already considerable donations. Founding member Elizabeth Bragg, who has Blackfeet, Cherokee, Gros Ventre and European-American ancestry, wrote in the application that the farm integrates indigenous food practices and years of market gardening experience. (The farm name honors Bragg’s great-great-grandmother, Long Hearing Woman; Bragg oversees it with fellow founding member Kelly Skillingstead.)

Long Hearing’s contributions last year included distributing produce to its local food bank through the farm’s Community Food Fund, working with the Darrington School District on its first fresh foods purchasing grant, working with Skagit Indian Nation to distribute weekly bags of produce to their Elders program, supplying more than 1,000 pounds of produce to two indigenous farmers markets in a partnership with Seattle Indian Health Board (through Groundwork, a food and political education hub building community food systems for all), and hosting a nettle gathering event and harvest party for Western Washington University’s Native American Student Union on its Otaapohkat Plot, an area of the farm dedicated to traditional and ancestral foods. Their local and national service includes the National Young Farmers Coalition, Groundwork, and the Pacific Northwest BIPOC Food Systems Network.

As Bragg put it, “We grow food as if the lives of the children in our communities matter. We feed as many families as the soil and our abilities allow.” 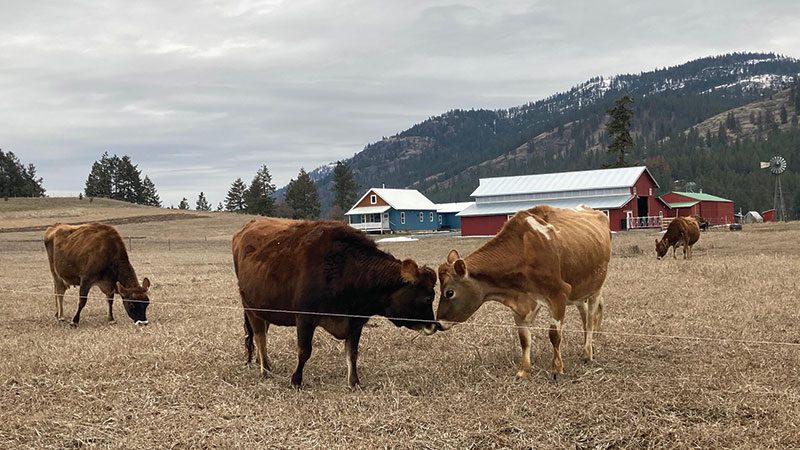 Clover Mountain’s owners made two big changes last year—at least big from their perspective. The number of grass-fed cows milked at the small organic dairy increased from three to four, and cheese joined its production schedule along with vat-pasteurized milk and yogurt. Now, Stacy and Virginia Thomas, the Coast Guard veterans who own the 40-acre farm, have expanded to eight cows: Buttercup, Rose, Carnation, Daisy, Dodie, Arrowleaf, Dandelion and Sunflower.

Starting out their cheesemaking project, the couple made a temporary cheese cave from an upright freezer and thermostat controller. It holds less than a week’s worth of cheese. Customers loved the results, they wrote in their grant application, but to make more they’ll need a larger, permanent cave for aging and storing. Experienced construction workers who also built their farmhouse and barn, they plan to do the work themselves, converting a room in the current dairy to the climate-controlled cave.

Entering that marketplace will fill a gap that currently exists for organic cheeses, they said, and provide high-quality foods to their rural community and throughout Eastern Washington. Hopefully, they wrote, the project will both encourage other organic cheesemakers to set up shop in the area and highlight cheeses showcasing the distinct regional identity of their more arid environment. They also hope to expand production enough to distribute cheese to a retail store in Spokane.

“We have witnessed that when a community has access to premium quality products at a fair price they relish them and will support their local farmers.”

A combined three decades of experience helped them establish a robust 45-acre farm in Whatcom County with a vision of “ecological stewardship and resilient local foodsheds.” A PCC grant will go toward a larger vineyard trellis project at the farm.

Alluvial produces organic pork, raising pastured pigs and growing grains and legumes for part of their feed on the land. They’ve also launched an organic hemp business and are starting to produce grapes, selling initial harvests to a winery. Their goal is to layer different lines of business for better long-term stability. Alluvial Farms planted an acre of Jupiter grapes last year and plans to eventually plant 5 acres yielding 25 tons of grapes annually for wine, raisins and grape juice.

Every seven years, the applicants wrote, “resting” the farm from pastured pigs will help break parasite cycles, and having other lines of income would help fill those gaps. Adding grapes to the farm should both improve the farm’s profitability while helping properly steward the land. 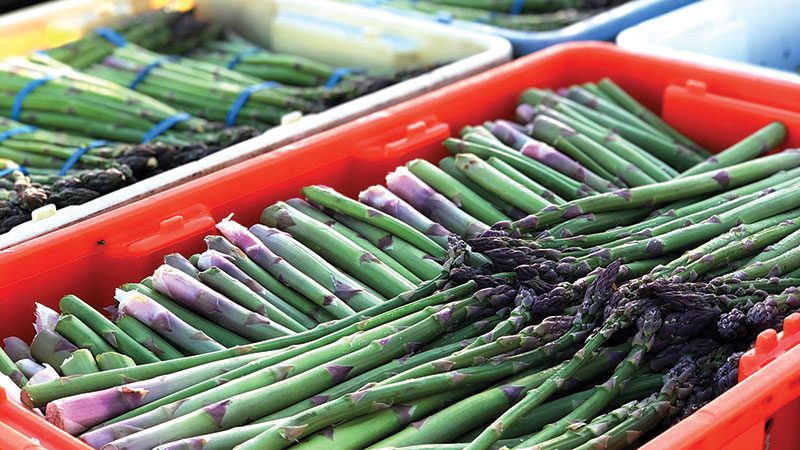 Santos and Zanaida Guadarrama worked as farmhands for years at P&P Farms in Royal City after emigrating from Mexico as newlywed teens “with big dreams and a few dollars.” They became friends with P&P owners Ike and Alice Parker, leasing land from the couple after the Parkers retired and eventually buying their own 3.5-acre farm. Over the years, it’s become harder for such small independent farms to survive. The labor market has tightened and the children who once ran the farm with them have largely moved on to other careers, just as they’re getting older and the difficult physical labor becomes even more challenging.

Over the years, Santos wrote in the application, he has seen other small Hispanic-run farms emulate Royal Produce. It’s a compliment and a motivator. They’d like to show how new technologies can keep a small independent farm alive, both for their own children and grandchildren and for others in the community.

“There are people like me who have dirt in their blood. We were born to be farmers against all odds. It takes resilience to maintain small family farms. There is something special about fruits and vegetables from a small farm versus a big-box store. If we can keep alive the traditions that we have held for many generations of learning and teaching others how to grow your own food, then that is a success.”

PCC Board of Trustees election

Voting closes May 2 for the three candidates running for election to the PCC Board of Trustees.

With local grain and wild sourdough cultures, one bakery is connecting an island ecosystem. Barn Owl Bakery can’t feed the world, but its model can be shared, evolved, and adapted elsewhere.

In an unheralded but essential job, workers from around the globe at Dreamland Foods make a sweetener-free Vegenaise —plus other contributions to delectable deli foods.