How one bakery is connecting an island ecosystem

For thousands of years, before the industrialization of agriculture, landrace grains fed the world. Generations of farmers planted seed out, harvested and planted seed out again. Over time, natural variation and seed exchange created highly diverse, hyper-localized, and inherently resilient populations.

Rather than selectively bred and privately owned seed varieties, a landrace grain is a population that might include 10,000 or more genetically different individuals, said Nathan Hodges of Barn Owl Bakery on Lopez Island.

In their small business on Lopez, some 60 miles northwest of Seattle, Hodges and co-owner Sage Dilts hope to re-establish an island-sized version of that world. In the old sawmill-turned-gallery-turned-bakery where they also raise their children, nestled on the north end of the island’s 29 square miles, they’re creating a modern bakery that attempts to operate in the environmental harmony of a past age.

By its nature, Barn Owl can’t be scaled up. It can’t be transplanted to another community. It can’t feed the world.

But what it can do—feed its own community, from seed to sourdough—can be shared widely, evolved and adapted elsewhere.

“Our bakery is seated in a place that has healthy agricultural practices around it,” said Dilts. “Could everybody live this way? Could it be sustainable for 8 billion people? In a lot of ways, no. We still have to make money, we have a mortgage. But what are the limits we can put on the way that we do it so that we walk a path of low impact?” 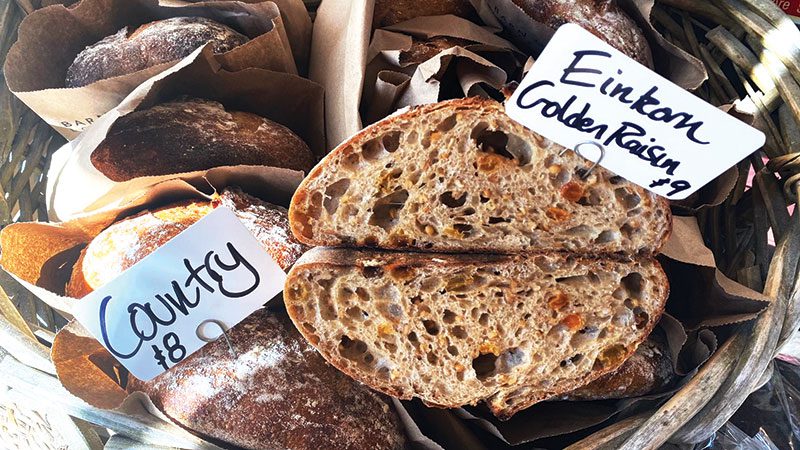 Before landing in the San Juan islands, the couple lived in Berkeley during the Bay Area’s sourdough renaissance in the early 2000s. With Sally Fallon’s influential cookbook “Nourishing Traditions” as one guiding light, Dilts read about traditional foods and healthy food systems.

She learned sourdough from Eduardo Morell, who baked whole grain loaves in a wood-fired oven and sold them to a small customer base—an attractive business model.

“You have low overhead, low input, low tech,” she said. “You’re baking for your community and that sustains you economically and sustains the health of the community.”

When Hodges’ graduate work led them to Lopez, Dilts kept baking. She shared fresh loaves at a small yoga studio, then a village café.

“A friend suggested I start selling them at the farmers market. I put out like 40 loaves and they were gone really fast,” she said. The world of bread was widening, the island population was growing, and residents were excited about whole grain sourdough.

“We could fill a need in this community, which felt like the way to be able to live here. So we stayed.”

In 2013 she attended Washington State University’s Kneading Conference, just across the water in Mount Vernon, an outgrowth of the new and influential “Bread Lab” at the university bringing new attention to regional grains and breads.

She heard from farmers who were interested in growing new varieties of grain but who felt “there wasn’t a market for them unless they met really specific bakery requirements.” She wondered if they couldn’t flip the narrative: Could bakers instead learn how to use grains that grew best in a region?

The question came at a fortunate time and place.

A few years before the couple’s arrival, the Lopez Community Land Trust had funded a grain production project with the goal of improving food security on the island. Lopez falls within the Olympic rain shadow, which according to grain specialist O.J. Lougheed creates a climate pocket “perfect for growing the seeds of adapted crops needed for self-reliance.”

Sixteen varieties of wheat were planted in several locations on Lopez. One farmer transformed a semitruck trailer into a seed vault. Grain infrastructure expanded to include two flour mills, a hand-cracked silage maker, a small seed cleaner and a grain CSA.

“This was all happening separate from us, but it was creating an environment that we were just going to be able to use,” said Dilts.

“From the beginning, working with farmers on the island, we bought all of the grain they grew,” said Hodges. The pair learned more about how wheat is grown and worked alongside farmers to achieve higher quality milling grains.

“Grain grown on the island is a completely different ingredient than grain grown in the Midwest, or Eastern Washington,” he said. “As it turns out, some qualities that are supposedly necessary for good bread are only necessary in a more industrialized process. A hand-based, long-fermentation process doesn’t need quite the same characteristics.”

A bigger question eventually emerged: how to grow wheat in a way that’s good for the soil and the health of the consumer.

“I think that’s still a pretty open question,” said Hodges. “How do we move forward in a way that we feel good about as moral, ethical human beings? How do we run a business, bake bread, raise a family, and be part of this community in ways that are actively beneficial to all of those aspects?”

And yet, there were many ways to start.

Becoming more involved in seed selection, Barn Owl assumed stewardship of the island’s seed library. They sought new varieties, which were actually very old varieties, and began planting their own fields—first by hand and then with equipment scaled appropriately for more acreage.

“A lot of our seeds were collected from landraces in the late 1800s into the early 1900s,” said Hodges. “We check them out of seed banks and put them in our fields and let them adapt and evolve to this place, to Lopez.”

This practice isn’t about going back in time. It’s about picking up where these seeds left off and building a healthier, more resilient grain economy today.

“We’ve really taken on the role of seed farm,” said Hodges. “We’ll trial a variety, and if it grows well here, we’ll expand that seed until we have enough to bake a loaf of bread. If it bakes well and has good flavor, we’ll expand the seed until we have enough to give to a farmer. Every year there are challenges, but we have successfully expanded a handful of seeds, a couple square feet, into 10 acres. In 10 or 15 years, we hope to have a population that is very adapted to this place, this community.”

“And has great flavor,” he added. “Because at the end of the day, we’re a bakery, and it’s got to taste good.” 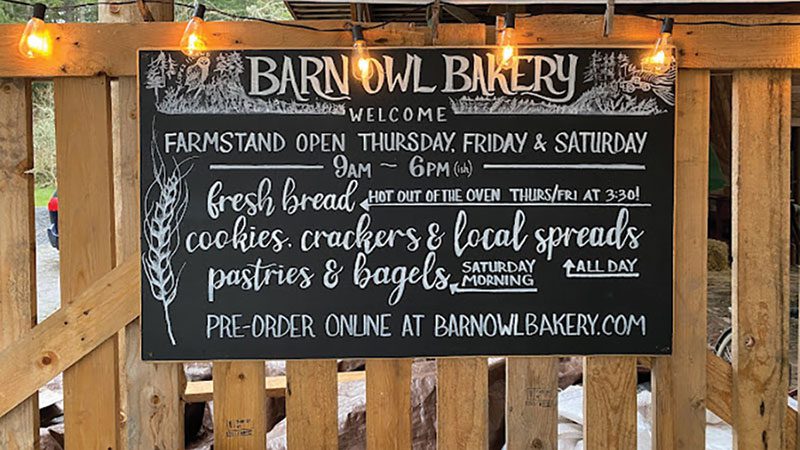 It’s not only local grain that makes each Barn Owl baked good uniquely Lopezian. The grain is cleaned, stone milled and stored on-island. Everything baked at Barn Owl takes on the character of their wild sourdough culture—they don’t use any commercial yeast or chemical leaveners. Their wood-fired ovens are even fueled with Lopez-grown biofuel: “Our island forests are second, third and fourth growth trees and need thinning to reduce fuel load, create diversity and increase timber quality,” the website reads.

Ultimately, it all comes back to the soil. Hodges said they consider the health of the soil one of the bakery’s bottom lines. Every year they measure the organic matter in their fields and research better ways to build soil health in a closed-loop system, one that doesn’t require outside fertilizers or other inputs. Hodges calls it “adaptive management.”

“Our organic matter tends to stay consistent year after year, but we haven’t been doing this for very long,” he said. “It’s difficult to say, ‘My actions had this clear reaction in the field.’”

Nuance abounds. For example, cover cropping is great for the soil, but it requires at least twice the acreage—leaving one field fallow requires having another to keep in production.

“We know that the number one driver of carbon leaving a field, or offgassing, is temperature. So we keep our fields covered in the summer, and we plow in the winter when it’s very cold and there’s not very much activity. So, hopefully, very little carbon is lost.”

“We look at the organic matter in the soil, and we also ask how valuable that is,” said Hodges. “I’ve found that if you only sample the top foot of a field, then no-till fields store a lot more carbon. But if you sample the top meter of a field, plowed fields generally store the same amount under similar management regimes. So I’ve been exploring different metrics.”

“We don’t water our fields—we just rely on rainfall,” said Hodges. “We don’t use imported fertilizers or any sort of chemicals. Our goal is to find a system that produces all the fertility that we need in the field.”

In many ways, Barn Owl works the way it does because of its location. A deeply placed-based operation, it isn’t necessarily designed to be replicated. Also noteworthy: The wealth of Barn Owl’s customer base is no small part of their success. In 2019 average per capita personal income in San Juan County was $76,749, well above state and U.S. averages.

“Local food is eaten in large part by people who have more choices when it comes to spending. There’s also more room there for change,” said Dilts. “It needs to be about shifting landscapes, shifting food availability, subsidizing food the way that bad food is subsidized. We’re seeing examples of that on Lopez—there was a huge effort to give away food, support local businesses to make the food, and then give it to people that need it.”

They have learned a lot from farmers who’ve been growing grain for years. At the same time, Hodges said, “there aren’t a lot of models for what we want to do.”

“That might be for a good reason,” he added, laughing. “Maybe what we want to do doesn’t work.”

So why try it?

“Is it proof of concept? Is it just for fun? Is it to make the world a better place? I think we’re just deeply driven by a curiosity about humans’ relationship to this planet,” said Hodges.

Added Dilts: “It’s a relationship that says, ‘We belong here. It’s where we come from and we should operate like we are good parts of nature.’”

Sarah Reeves is a Lopez Island writer and Northwest native.

The Kirkland PCC, planned more than 40 years ago as “Co-op East,” has moved to a brighter, bigger and significantly updated new building.

How a summer camp connected food with the Earth

As the outdoor cooking instructor at Camp Nor’wester, our Bastyr University correspondent learned lessons herself about the natural world.

PCC now has more than 100,000 members. We are spotlighting a few of the many people who help the co-op thrive.