Recipes for a prosperous New Year 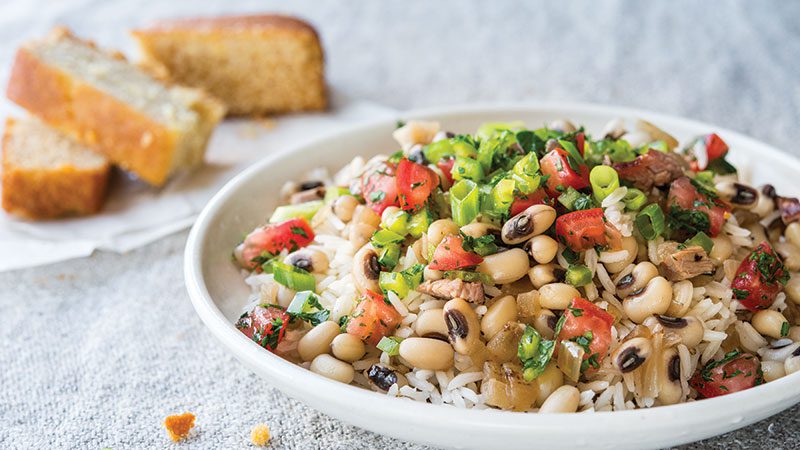 Looking for luck and prosperity in the coming year? Black-eyed peas are a traditional New Year’s dish in the Southern U.S., with the key ingredient signifying good fortune.

It’s also said that we make our own luck, and black-eyed peas can help with that too: The legumes (technically beans) are an inexpensive, nourishing source of potassium, iron and fiber—a wealth of nutrition on a plate. While we don’t have Chef Kristi Brown’s secret recipe for black-eyed pea hummus (see story here), we do have a version of the dish from PCC cooking class instructor Birgitte Antonsen, along with a variety of other PCC black-eyed pea recipes: Hoppin’ John, a soup, a salad, and an herbed Persian stew from PCC cooking class instructor Omid Roustaei.

Remove any stones or dirt from the beans (if using dried beans). Cover with cold water and soak overnight. Drain and rinse thoroughly.

In a pot, add the beans and cover with vegetable stock. Add the onion and salt. Cook beans until soft; the cooking time depends on the bean used, but around one hour. Let the beans sit in the cooking liquid until cold. Drain off liquid.

In a food processor, add the cooked beans and all the other ingredients. Process until creamy. Refrigerate until ready to use or freeze in smaller portions using freezer bags. Use within three days.

In a large bowl, combine peas, ham, onions, kale leaves, radishes and celery. Drizzle with yogurt dressing and mix well. Let sit covered in the refrigerator, to allow flavors to meld, at least 30 minutes or overnight.

Note: To prepare dried black-eyed peas, soak 2 cups peas in water for at least 4 hours. Drain and rinse. Place beans in a large soup pot and cover with ample water. Bring to a boil. Reduce heat to low and simmer until just tender, about 1 hour. Drain.

Soak peas in water for at least 4 hours. Drain and rinse.

In a large soup pot, cover peas with ample water. Bring to a boil. Reduce heat to a simmer and cook until just tender, about 1 hour. Drain and set aside.

Add kale, corn and cooked black-eyed peas to the pot. Cover with stock and bring to a boil. Reduce heat to a simmer and cook for 30 minutes to 1 hour. Season to taste with salt and pepper.

In a large soup pot, heat oil over medium heat and cook onions until tender, 3 to 4 minutes. Add peas, broth, Spike and smoked turkey. Bring the mixture back to a simmer and cook for 1 to 2 hours, until peas are very tender.

Remove turkey from the pot and shred the meat, discarding the bone. Stir rice, 1 cup tomatoes and turkey meat back into beans. Cover and simmer for 20 minutes. Turn the heat off and let stand for 5 minutes. Season to taste with salt and pepper. Fluff with a fork.

In a food processor, blend spinach, cilantro, parsley and leek to a fine chop and set aside.

Add water, black-eyed peas and lime juice and simmer over low heat for about 30 minutes.

Serve over your favorite grain. Traditionally, this dish is served over white basmati rice, like any other Persian stew.

How did new owners of a beloved artisan charcuterie business make needed changes while preserving the company’s quality and soul?