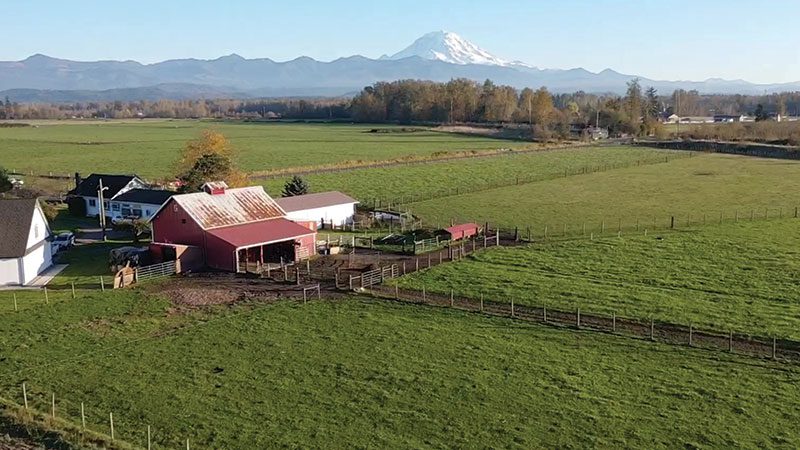 The Washington Farmland Trust has protected three more pieces of land from development—but climate change is forcing the nonprofit to adapt its tools for preservation.

Two of the three newly preserved parcels of farmland are in the Stillaguamish River Valley (the third is near Everett, see related story below). The Stillaguamish Valley is one of the statewide Trust’s highest-priority areas, given its proximity to both Puget Sound and urban development, with communities and ecosystems relying on its river system.

The larger parcel, the 172-acre Lund Farm in Stanwood, is adjacent to an existing Trust property that’s nearly the same size (the 173-acre Johnson Farm). “This allows for the protection of a contiguous block of prime farmland, helping to maintain the agricultural character of the landscape,” the Trust said in a news release. “Father-son pair Larry and Gary Lund have farmed in the Stanwood area for much of their lives and are grateful to know their land will remain a farm.” The second parcel is the 83-acre Williams Farm, a second-generation family farm on the south fork of the Stillaguamish River, run by Garrett Williams and his father Rick.

The nonprofit Trust—originally founded in 1999 as the PCC Farmland Fund—has traditionally focused on protecting organic farmland from urban sprawl. In early incarnations, the Trust purchased property and leased it to farmers, later focusing on buying conservation easements that ensured the property could only be used for farmland.

Now, though, there’s no guarantee that property in sensitive areas like the Stilly Valley will be suited for farmland several generations down the line.

As the Trust put it, “Climate impacts such as sea level rise, saltwater intrusion and flooding cause daily challenges for farmers concerned about the future viability of farmland, from both a natural resource and economic perspective.”

Consequently, the conservation easements for those properties account for other uses.

If the two new Stillaguamish properties are no longer viable for farmland in the future, “the land would still remain protected forever, but the land holder would have the ability to transition management of the property to benefit fish and wildlife or flood reduction if needed…

“Unsettling as it may be to imagine a future threatened by climate change, this shift in our easement language allows us to protect prime farmland now while remaining flexible about how land is managed into the future.”

How did new owners of a beloved artisan charcuterie business make needed changes while preserving the company’s quality and soul?

Thanks to a hard-won change in state law and a collaboration with local health departments, PCC shoppers can soon use more reusable containers in stores.