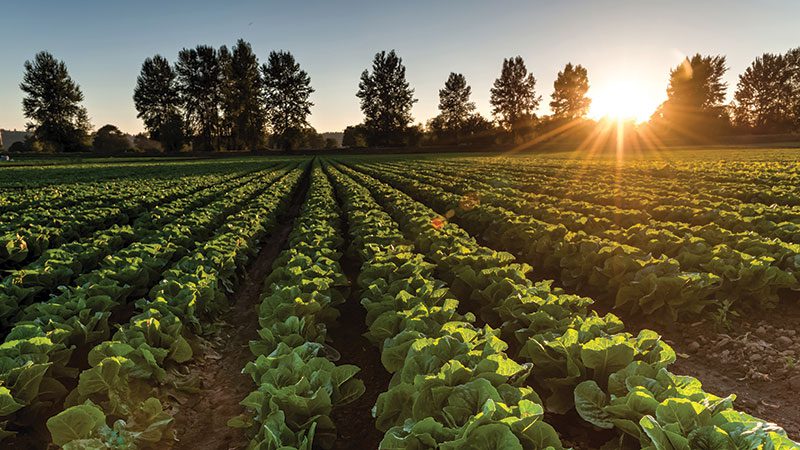 In Eastern Pennsylvania, fields of corn that stretch endlessly toward the horizon are a common sight. But 12 acres in Kutztown are nothing like the rest.

It’s the site of Rodale Institute’s Farming Systems Trial (FST), the longest running side-by-side comparison of organic and conventional farming in the world. There, neat rows are being treated differently than their neighbors, while scientists measure and track their performance on several different metrics.

This year, Rodale—a trailblazing force for organic and regenerative farming in the U.S.—is celebrating the trial’s 40th anniversary. Over those four decades, the experiment has produced a wealth of data and has had a broad impact. It influenced the creation of the United States Department of Agriculture’s (USDA) organic certification program and inspired other research trials around the world. (Side note: FYI, George Washington Carver was pioneering organic soil-building techniques 70 years earlier, and his contributions are often left out of organic’s history.)

Even if “fertility sources” and “crop yields” make your eyes glaze over, the research could affect how you eat. For instance, it might impact the amount of organic food that is produced and available, the price of organic food, and what we know about whether or not organic is better for your health and the planet’s.

“It was really important that we create a uniform certification standard and have a federal law to support it,” said Jeff Moyer, who has worked at Rodale for almost the entire length of the FST and is now CEO. “Now we’re saying that we can use the same data sets to drive the conversation around water quality, carbon sequestration and climate change, and also human health. There are so many opportunities there.”

To acknowledge the anniversary, Moyer spoke with me about some of the most significant findings from the FST.

Rodale researchers launched the FST in response to a USDA survey in the 1980s, Moyer explained. The survey found that one of the main reasons farmers were reluctant to transition to organic was that they worried about sources of nitrogen. Nitrogen is the most essential nutrient for plant growth, and conventional farmers use chemical fertilizer to deliver it. That’s not allowed in organic, and organic sources—manure, compost, or plants that fix nitrogen into the soil—are trickier. Farmers didn’t think they’d be able to provide enough or that it would be more expensive. And at the time, they weren’t being paid more to produce organic food.

Rodale researchers decided to measure how crops given nitrogen in different ways—via chemical fertilizer in a typical conventional system or via manure or planted legumes in an organic system—performed. According to Moyer, they chose to focus on grains in an attempt to influence the maximum number of acres.

“We could have worked on a vegetable experiment, but quite honestly, if you impact the way rutabagas are grown, you’re only impacting a really tiny amount of acres, whereas if you can demonstrate positive changes around corn or even wheat, you can impact millions and millions of acres,” he said. (Among organic advocates, this is one approach. Others believe making changes to a system set up to grow too much of the wrong crops can prolong the life of that system, when it would be better to disrupt it and replace it with diversified organic operations that operate from a completely different paradigm. In a story I wrote about Rodale’s latest partnership for Civil Eats, you can see that tension surfacing.)

So nitrogen was the genesis, but the FST gradually transformed into an experiment that went far beyond. “The first thing we found was that we could actually produce equal yields in organic systems to conventional, even without animals. The other thing we found was that animals in the system made things much easier,” Moyer said. In other words, organic farmers wouldn’t necessarily have to sacrifice yields (i.e., grow less food per acre) when they switched to organic nitrogen sources like manure. Other studies have found the opposite, but Rodale researchers say that’s a function of time. Most studies are short, and when farmers switch to organic, yields do drop—in the first five years. But the FST has shown that over 40 years, the soil bounces back and things level off. Organic fields in the trial have also been able to weather periods of drought much better than conventional.

Of course, Rodale was established to advocate for organic, so we’ve got to keep that in mind. Their researchers have an interest in demonstrating positive outcomes, and the question of yields is still debated. It’s also increasingly important, given how it relates to climate change impacts.

What does the amount of food produced have to do with climate change? If you produce less food on the same amount of land, it follows that you might need more land to feed people. Therefore, greenhouse gas emissions could be increased from the clearing of forests on that land. This is the most common argument cited in studies that find organic farming is “worse for climate change.”

But there are so many factors that contribute to climate impact, and data from the FST also shows impressive increases in organic matter in the soil compared to conventional fields.

This matters because organic matter is where carbon hangs out. As in, the carbon that is causing mayhem above ground as a greenhouse gas can be stored beneath our feet, and other long-term farm trials in Maryland, Pennsylvania and California have all found higher levels of carbon in organic soils, especially deep down where it’s likely to stay for longer periods of time. There are many questions remaining on how to best sequester carbon in soil and whether the amount could be meaningful in terms of slowing down climate change, but this research is promising. Plus, healthier soil benefits farmers in other ways, especially in terms of holding water during droughts.

“Carbon is the currency that helps us build up health,” Moyer said. “As we improve our soil health, we are also able to adapt to the impacts of climate change. One story that we can tell from the FST is that we can improve soil health by the way we farm. Twenty five years of continuous [conventional] corn had killed that soil. We were able to take that soil and regenerate it. And we didn’t have to take it out of production. You can have marketable crops off of every acre every year and improve the soil while you do it. That’s the real bright spot.”

And yield and soil health are only two metrics in a system that includes so much more. While the climate crisis is the most pressing environmental problem facing humans today, organic advocates say that when planning and evaluating research, it’s essential to consider all of the effects, from pesticide impacts to nutrient content. More importantly, Moyer said, is remembering that all agricultural questions should be asked in the context of what the true endpoint is. In other words: What, in the end, is the point of farming?

“If the goal is to ask ‘How do we kill weeds or manage weeds most efficiently and effectively?’ then herbicides work. But that’s not the goal of agriculture, right? That’s one step in a process that [should] produce healthy food for healthy people and a healthy planet,” he said. “We’re not suggesting that conventional doesn’t work. If the goal is to produce tons of stuff, it works. We’re suggesting that it doesn’t work if the end goal is human health and planetary health.”

Apply to be a Trustee with PCC Community Markets

Help guide the future of the largest community-owned grocer in the country.