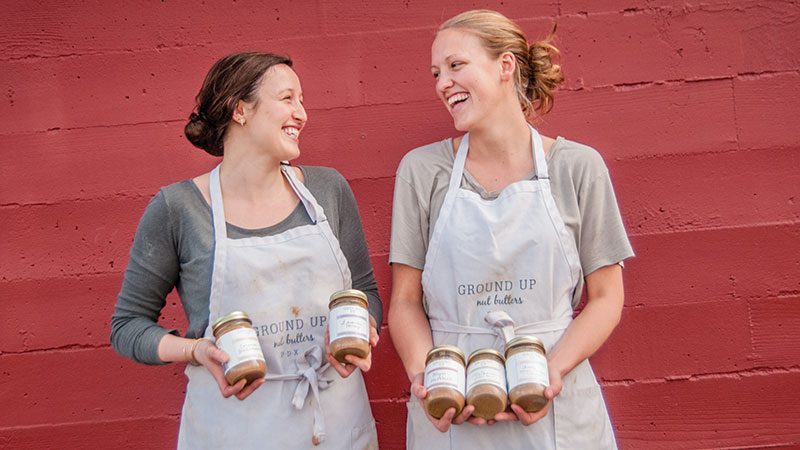 One recent Tuesday morning, two-dozen women stood in a circle in a Portland warehouse, amidst forklifts, stacks of packaging materials, and many, many boxes of nuts.

It was the weekly all-staff meeting for Ground Up, a Portland, Ore., company that makes handcrafted nut butters, and there was lots to celebrate. Ground Up products were now selling in hundreds of stores along the West Coast (including all PCC stores). One employee had recently hit the three-month mark, qualifying her for lunch with one of the company’s founders. Another employee was three years sober, a milestone that was celebrated with a round of applause. Meanwhile, a third was making a list of favorite ice cream flavors for a company party later that afternoon.

If it’s not clear by now, Ground Up is an unusual company. Sure the unique flavors, such as Snickerdoodle or Coconut Cardamom, provide a tasty alternative to the standard brownbag PB&J school lunch. But rather than focus solely on sales volumes and profits, Ground Up’s main mission is to provide employment opportunities for women who’ve overcome adversity, including substance abuse, sex work or homelessness. The founders call it a “not-just-for-profit” company, and its centerpiece is a training program that currently employs 10 women in various stages of getting back on their feet.

Six years ago, when Loos returned to Portland after a stint in Uganda running an employment training program, selling handcrafted nut butters wasn’t even on the radar. Instead, she was looking for a fulfilling career, one that could help transform lives.

In Uganda, Loos’ program taught women to make beaded jewelry. Many of the women used it as a stepping stone to launch their own small businesses. It was good for the women, good for their families and good for the community, Loos said. And it was so powerful, she wanted to do something like that here in the U.S.

Loos knew that women who’ve overcome adversity have a hard time finding work once they’re clean, sober and stable. How do you explain big gaps on your resumé? Or what if you’ve never even held a job? She thought offering these women opportunities to work, no questions asked, was the answer. But first she’d need a vehicle for the training program—a product to sell.

“I had a lot of crazy ideas,” she said, including custom sugar cubes, which, she learned, can quickly turn into amorphous sugar blobs if you’re not careful. At the time, she was working at Sseko Designs, a socially conscious clothing and leather goods company, but on the side, she kept hunting for opportunities to test out her own ideas.

Then one day, Carolyn Cesario, a Sseko colleague, handed her a jar of homemade nut butter. Cesario had been making the peanut- and sugar-free butters in her own kitchen because she was on a restricted diet. Loos thought they were so tasty, she soon found herself in Cesario’s kitchen, learning how she made them.

“Pretty much overnight we started Ground Up,” Loos said.

Focus on the forward

First they did tastings with friends. Then they got in some Portland-area farmers markets but both were still working regular jobs, staying up into the wee hours to crank out jars of nut butter using a Cuisinart.

Eventually, they quit their regular jobs to jump full-bore into Ground Up. About three years ago, they got their product into some local grocery stores. And of course they’ve graduated from the countertop Cuisinart to a small warehouse and production facility, where women dig into the hands-on work of making and packaging hundreds of jars a day.

Women like Bonnie Smith, whose three-year sobriety was cheered by her colleagues. When Smith came to Ground Up, she was six months pregnant and living in a tent. She had a history of heroin addiction and had been fired from her most recent job, at a laundry, because she wasn’t pulling her weight, she said. But Ground Up wasn’t interested in that.

“We focus on the forward and the dreams, where someone wants to go, not the past,” Loos explained.

If Smith was ready to work, she could join the training program.

“I love it,” she said. “I’m treated as an equal with everyone, and the community is great.”

The women start at $14 an hour, and the training lasts six to nine months. They start working in the kitchen, tightening lids, labeling use-by dates with a Sharpie, and packaging the jars in cases, with music turned up to make things lively. Ingredients, including local favorites like Jacobsen’s Salts, are weighed and measured by hand—a job with a lot of responsibility, since an error can affect entire batches.

In a typical food production facility, Loos explained, a machine is essentially running the operation. But Ground Up is trying to balance production needs with their goal of serving the women, so there’s just one jar-filling machine here, and it’s operated by an actual human.

“If we had a conveyor belt, we’d lose some job opportunities,” she said. Hand production like this can increase costs. Shifts are typically overstaffed, to account for trainees who might not show up, and to allow them to leave the production floor for one-on-one sessions with an employee support manager who helps the trainees create goals or learn skills like budgeting. The goal is that they develop skills to propel them to the next job.

Smith loved the training program so much, she applied for a regular, non-trainee job opening when it came up and now works in order fulfillment and helps newbies learn the ropes. Along the way, she found permanent housing and got her family life back on track. And if she hadn’t been given this opportunity?

“I can’t even imagine what that would look like,” she said.

She is proud of the skills she’s learned at Ground Up, including getting certified to operate a forklift. But more than that, she talks about what it’s done for her confidence.

“Everybody here is so supportive and helped me realize it was a safe space,” she said. “I guess you could say I found my voice here. I became a better me.”

Maureen O’Hagan is a longtime journalist who writes about food, science and other subjects.