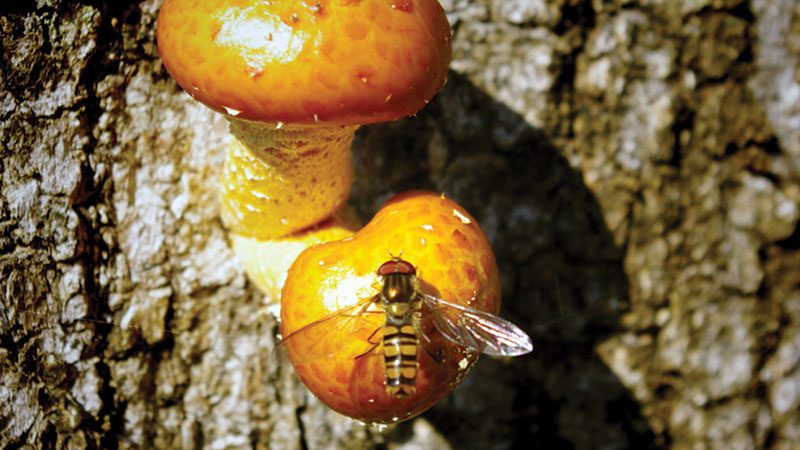 The path that brought noted mycologist Paul Stamets to studying mushrooms began, in part, with a book his older brother brought home from college—the 1969 cult classic, “Altered States of Consciousness,” written by one of the founders of transpersonal psychology. Stamets was a young teenager at the time.

The book alone might not have done the trick, but Stamets loaned the library book to a friend after reading it. When he asked for the book back, Stamets discovered his friend’s father had burnt it.

“I thought—if this book had such powerful ideas it was so disturbing to his all too authoritarian father,” Stamets said, emphasizing each word, “then this is a subject I need to study.”

As a teen growing up in Ohio, Stamets had no idea this study would lead him to start a pioneering mushroom supply company, work in conjunction with scientific researchers and even the government, and now collaborate on efforts to save the threatened bee population. One might say, it’s been quite a trip.

As a teaching assistant for a class on Mushrooms of the Pacific Northwest at Evergreen State College in the 1970s, Stamets noticed the syllabus he had written looked like the table of contents for a book—and decided he should write one. He told the class if they gave him six dollars in advance, he would give them a copy of the book when he published it, thus gaining some financing and the motivation to go through with the plan.

Stamets also realized his students needed the supplies for mycology studies—petri dishes, yeast, malt and agar agar (which he sourced, he says, at the PCC store in Ravenna). There was no single place that offered all supplies, so Stamets started a small mail order business in 1980 to meet these needs. Called Fungi Perfecti and located in Olympia, the company provides mushroom growing materials, extracts, supplements, foraging equipment, books and more.

That first book, now out of print, was a guide to Psilocybe mushrooms and their allies, written in 1978. “There are some [poisonous] wood chip mushrooms that grow in the same places that magic mushrooms grow,” Stamets explains. “I really saw this as a public health issue—no doubt people would be collecting these [magic] mushrooms, so they better have the knowledge to prevent poisoning themselves and their friends.”

That volume was followed by many others: “Growing Gourmet and Medicinal Mushrooms,” “The Mushroom Cultivator” (co-authored with J.S. Chilton), “Psilocybin Mushrooms of the World,” and “Mycelium Running: How Mushrooms Can Help Save the World.” The latter, published in 2005, details the ways mushrooms might address a wide variety of problems caused by modern life, from dealing with toxic waste and pollution (mycoremediation), controlling insect populations without chemicals (mycoresticides), to addressing the issue of agricultural runoff and preserving the health of waterways (mycofiltration). Mushrooms and mycelium can have a beneficial impact on carbon sequestration, soil fertility, and the health of forests, gardens and agriculture.

For those not yet inoculated with a curiosity about fungi: mycelium is the vast underground, interconnected web that mushrooms emerge from (you can see this in your garden—or in an old woodchip pile—when you turn it over with a shovel and see delicate white threads). Mushrooms are the fruiting bodies of the mycelium—appearing in season when conditions are right, to distribute spores that serve as seeds to establish the next generation.

Thus, a mushroom seen on the forest floor is the smallest manifestation of a much larger organism (there is a mycelial mat in Oregon that is 2,200 acres in size). Their role is to decompose, digest and distribute nutrients. Fungi is the name of the kingdom—thought to have given rise to the animal kingdoms some 650 million years ago. The fungal kingdom is estimated to contain 1.5 to 2 million species, only 14,000 of which have been named (and only about 200 species, Stamets points out, are delicious to eat). We’ve identified about 10% of the mushroom-forming species (molds and other non-fruiting species are also included in this kingdom). There is so much about fungi that we do not know.

With his curiosity and enthusiasm, Stamets has become a leading proponent of the fungal kingdom, with a popular TED Talk (“Six Ways Mushrooms Can Save the World”), and a starring role in the Louie Schwartzberg documentary film, “Fantastic Fungi” (2019), whose time-lapse photography of mushrooms emerging and releasing spores dazzled viewers. But he is quick to point out that mushrooms have a long tradition of use in Indigenous cultures. “It goes back thousands and thousands of years,” he says. “Mushrooms are great unifiers across cultures,” though some of that traditional knowledge has been lost due to the devastating impact of colonialism, plagues and genocide.

The medicinal value of mushrooms—long used in Chinese and Japanese medicine, among others—is of particular interest. Stamets has developed a line of immune boosting supplements, marketed under the brand Host Defense, and has collaborated to research a number of diseases, ranging from smallpox (in conjunction with the Department of Defense’s BioShield antiterrorism program) to a current clinical trial on Coronavirus with the University of California at San Diego. This yearlong study is on the effect of medicinal mushroom extracts on COVID long-haul syndrome, but Stamets is wary of making any particular health claims. “Mushrooms support immunity,” is as specific as he—and the U.S. Food and Drug Administration—will go at this point.

It is the bee population, however, that might benefit from Stamets’ curiosity the most. A long-time amateur beekeeper, in 1984 he began to notice the bees from his hives were flying over to the bed where he was cultivating mushrooms. “They were actually moving the woodchips,” he explains, “and I could see them sipping on these little droplets coming off the mycelium.” The bees were drinking the sugars created when mycelium breaks down cellulose. “From dawn to dusk,” he says, “there was a continuous convoy going from my beehives to the mushroom bed and then back to the beehives.”

Stamets wondered if there might be an application to help world honeybee populations, who—in addition to loss of habitat and the danger of pesticide use—have been under attack by infestations of Verroa destructor. “The Verroa mites start spreading through all the beehives,” Stamets explains, “and they vector viruses.” These viruses shorten the lifespan of bees and deform their wings. With shorter lifespans, bees are unable to pollinate as many flowers, which has a dangerous impact on food crops (75% of leading global crops—and one out of every three mouthfuls of food consumed by humans—relies on animal pollination, according to the World Wildlife Fund).

Stamets approached the entomology department at Washington State University with the idea that mushroom extracts might provide antiviral protection for the bee population. This piqued the interest of Dr. Walter “Steve” Sheppard, head of the department, and has led to an ongoing collaboration. The preliminary results have been extremely encouraging—showing a 45,000-fold reduction in Lake Sinai Virus, one of the viruses passed on by Verroa mites, and a 79-fold reduction in Deformed Wing Virus, when compared to a laboratory control group. “We don’t know exactly how it works,” says Stamets, “but we have evidence that it upregulates gene expression for innate immunity,” meaning the bees’ immune system is turned on and consequentially better able to fight the viruses.

The extracts, thus far, have only been tested on domesticated honeybee populations, but the next phase will be getting approval from the U.S. Department of Agriculture. (Bees are considered minor livestock and mushroom mycelium has to be specifically approved for this purpose.) It may be the first good news regarding bee pollination in some time. “This has been emotionally and economically devastating to beekeepers,” Stamets says, and tells of a bee researcher he knows who has not seen a disease-free bee in 10 years. Most people don’t fully realize the role bees play, but in current financial terms alone it is estimated that the value of the pollination services contributed by managed bee populations adds $15 billion to the U.S. agricultural economy.

In addition to supporting bee research and avoiding pesticide use, an easy way to help local bee populations, according to Stamets, is simply to not tidy up our yards quite so much. “The number one thing I would ask people to do, in the urban and suburban environments,” he says, “is let wood rot.” This means letting storm-downed branches, autumn leaves and garden debris break down and compost. “The whole idea of an Elizabethan yard, where everyone picks up all the debris and makes it super clean and spic and span is antithetical to biodiversity,” he explains.

Biodiversity and the health of our environment are paramount to our ongoing health and survival. “If our ecosystems fail, what will people do for food?” Stamets asks in a clip from the film “Fantastic Fungi.” “This is fundamental to saving our ecosystems. I’m hoping that people will recognize mushrooms for the important roles they play in the ecosystem…before it’s too late.”

Tara Austen Weaver is a Seattle-based writer who focuses on food, agriculture and environmental issues. She is author of five books, including “The Butcher & The Vegetarian,” “Orchard House,” and “Growing Berries and Fruit Trees in the Pacific Northwest.”

September is National Mushroom Month and National Honey Month! Click here for more information on the Give Bees A Chance program.

11 questions and answers about regenerative agriculture

Regenerative agriculture has become an everyday term over the past decade when talking about sustainable farming. We look at what the term really means and why it has become so important.