Choosing the best alternative milk for you and the planet 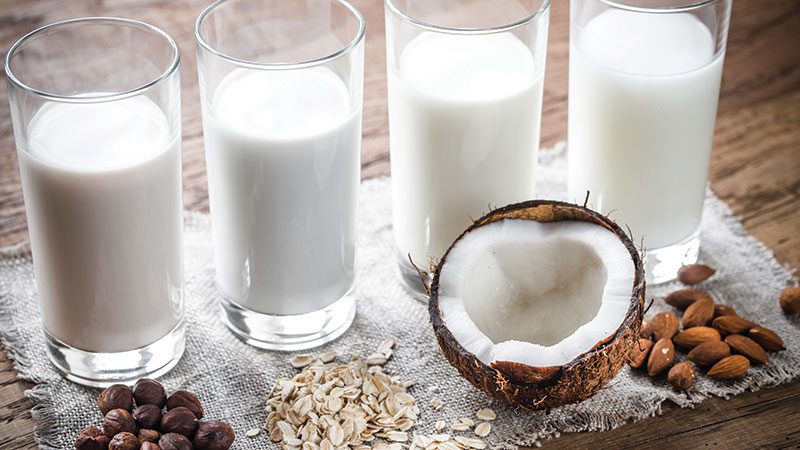 Are plant-based milks better for your health than dairy-based milks? Are they better for the environment? Both questions have become commonplace as oat, hemp, coconut, almond, and even macadamia milks fill grocery store shelves and coffee shop menus.

The answers to those questions are complicated, too. They ultimately depend on who is asking the question and on their own priorities and concerns.

Different types of milk do have different features, though. Learning more about them can help you determine what’s best for you.

First, let’s talk about the term “milk.” Some lawmakers, along with the U.S. Food and Drug Administration, have questioned whether that can be an accurate label for plant-based products (see “Labeling Laws Target ‘Burgers,’ ‘Milk’ and Even ‘Rice'”). Certainly, for years dairy milk was the only widely available option and was seen as a generally desirable drink (remember the hugely successful “Got Milk” campaigns?).

Dairy milk does provide an easy and excellent source of protein and a number of important minerals, particularly calcium. Plant-based milks, though, can also be a terrific alternative to a food that some deem unnecessary for those already consuming a balanced diet. Both options have associated environmental concerns. An essential question that often goes unasked, especially with the food system contributing an estimated one-third of global greenhouse gasses: What is the carbon footprint of each choice?

That question has become a more pressing concern as the plant-based milk industry continues its rocket-fueled growth. Plant-based milks are now a nearly $3 billion industry annually, making up close to 15% of total milk sales even though prices average around twice the price of dairy milks (see article here). Their appeal comes from shoppers concerned about everything from lactose intolerance and other health issues to animal rights and the environment. For some, technology and market forces have also opened their eyes to new and appealing options: They simply prefer the creamy taste of oat milk in a cup of Joe.

Research indicates that all plant milks have an overall lighter environmental impact than dairy milk, save, perhaps, if you live near a small dairy farm and hop over your neighbor’s fence to gather a jar of local milk from a pastured cow. A study from the University of Oxford showed that a single glass of dairy milk produces nearly three times as many greenhouse gas emissions as a glass of any plant-based milk. In fact, according to Stephanie Feldstein from the Center for Biological Diversity, conventional dairy milk production alone is responsible for 3% of all greenhouse gas emissions when including the pesticides, pollution and fossil fuels that go into raising these animals. Dairy cattle also use nearly one-fifth of the water consumed by animal agriculture, their feed crops use a significant amount of land, and a single, relatively small dairy facility can produce more sewage than a town of 10,000 people. No matter which dairy alternative you choose, Feldstein adds, “Plant-based milks require far fewer resources, easing pressure on the climate, habitat, water sources and wildlife.”

But should these alternates be considered healthy foods, especially compared with cow’s milk, which can be a rich and easily accessible source of protein and nutrients for those who can digest it? A lot depends on the type of alternate milk in question. Almonds, for instance, have a very different nutritional profile than oats. Keep an eye out also on the additives in various brands, which can contribute both positive and negative properties.

When fortified, for instance, some non-dairy milks provide nutrients like vitamins D and B12, and calcium. They can also be a good source of beneficial plant compounds.

Some, though, also have added sugars that add empty calories to the milk, or have thickening additives like gums or carrageenan, which have been linked to digestive issues. (PCC does stock some nut milks that contain carrageenan, though it is not permitted in any new additions to PCC’s shelves.)

Below is a breakdown of health and environmental considerations of six different plant-based milks to help guide you through a sea of options.

This appears to be America’s favorite, representing roughly one-third of the value of all plant-based milks sold.

Most packaged almond milks don’t provide the key nutritional benefits of raw almonds, such as high protein content, fiber and heart-healthy monounsaturated fats. While packaged almond milks are relatively low in calories (around 40 calories per cup, provided there is no added sugar), that means they don’t contain a huge amount of almonds, which the U.S. Department of Agriculture calculates at about 160 calories per ounce. Most packaged almond milks contain only about a gram of protein per serving, unless the producer has added protein from other sources, compared with the 8 grams in dairy or soy milk. If you are seeking a heart-supportive nutritional boost, a daily handful of almonds is a better bet.

On the environmental front, almonds raise concerns. Producing them takes an enormous amount of water, an issue in drought-prone California where 80% of the world’s almonds are grown. Producing 1 liter of almond milk uses approximately 371 liters of water. That’s less than the 618 liters of water estimated to produce a liter of cow’s milk, but still significant. (Sujatha Bergen, the health campaigns director at Natural Resources Defense Council, said water usage varies significantly. She suggests that to fully understand the impacts, contact the company that makes your favorite product and ask whether it is produced in drought-prone or deforested areas.)

If you do purchase almond milk, seek out the U.S. Department of Agriculture (USDA) organic label to avoid the herbicide glyphosate, which is used to treat 85% of almonds grown but is not allowed in certified organic foods.

Coconut contains a variety of healthy minerals as well as beneficial fats (known as “medium chain triglycerides”) that can support metabolism. However, it contains almost no protein and, potentially more concerning, it is high in saturated fats. The American Heart Association recommends keeping saturated fat intake to less than 10% of calories, which works out to between 12 and 20 grams per day for most diets. One cup of store-bought coconut milk contains about 5 grams of saturated fat.

Environmentally, coconuts are fairly sustainable in terms of water and resources used, and, when farmed organically, use fewer chemicals. However, new coconut groves often involve clear-cutting rainforests—and coconuts are mostly grown in wet, tropical regions like Indonesia, the Philippines and India, making greenhouse gases resulting from transport a major issue. Additionally, there are concerns that workers in those industries are often exploited, a key consideration when we think about what defines sustainability. We suggest seeking out “Fair Trade” labels when buying coconut milk (click here for more info).

This beverage made from hemp seeds typically contains numerous beneficial nutrients including vitamins, minerals, and up to 5 grams of protein per cup. The milk is also a decent source of potassium, zinc and magnesium, as well as Omega 3 and 6 essential fatty acids. Although often one of the more expensive options, this dairy alternative may also be ideal for those who have tree nut allergies but are seeking healthy fats. Although hemp is produced from the same plant as marijuana, it is not intoxicating.

From an environmental perspective, you may not find a more sustainable plant than hemp. Hemp uses very little fertilizer and tends to be naturally pest-resistant, reducing the need for pesticides. Additionally, the plant itself helps to create healthy soil, a hallmark of regenerative agriculture. Although labeled a “seed,” hemp is actually a member of the legume family. These “nitrogen fixers,” with the help of soil bacteria, remove nitrogen from the air and bring it into the soil where it is used as both fuel and fertilizer. Contributing to hemp’s sustainability is its versatility. The seeds are used for milk and oil, but all parts of the plant are used in manufacturing clothes, textiles and other products. It requires moderate to high amounts of water to produce, but less than almond or dairy milk.

Soy milk has a long history as the original preferred dairy milk replacement because of its similar nutrient profile, including its substantial protein content. In addition to containing “isoflavones,” the plant compound touted for its protective properties, some studies say soy can help reduce cholesterol. Some studies also suggest soy milks enriched with “plant sterols” have an even stronger beneficial effect on heart health. Soy milk also contains beneficial monounsaturated and polyunsaturated fats. Keep in mind that soy allergies or sensitivities are common. Seek out organic soy milk to reduce pesticide exposure and to avoid genetically modified beans, whose health effects are still a controversial topic.

Soy requires some of the least water to produce among the alternate milks. Like hemp, it also helps build soil and remove nitrogen from the atmosphere. Its overall environmental assessment, though, hinges on how the soy is grown. Much of the soy grown today is genetically modified and grown as an industrial monoculture, which decreases soil fertility and tends to reduce the diversity of beneficial insects, plants and wildlife. However, the majority of those crops are grown for animal feed and not human consumption. Still, buying organic or non-GMO Project Verified soy milks can support growing soybeans with more sustainable techniques.

Oat milk is a newer addition to the market that has won speedy acclaim and popularity. Despite being higher in carbohydrates and calories than most milk alternatives,this beverage provides close to 3 grams of protein and around 130 calories per cup. It’s also an unusually good source of fiber for a beverage, containing 2 to 4 grams per cup. Oats also contain beta glucans, a compound used to support heart health as well as the gut microbiome. Note that sweetening oat milk can bring the total to 150 calories per cup.

Oats score reasonably well on an environmental scorecard. They have a smaller carbon footprint than other options, using far less land than dairy milk or almond milk. Producing 1 liter of oat milk only requires 48 liters of water. Be aware, though, that oats (like soy) are often grown as a monoculture, which has negative implications for the surrounding ecosystem. Glyphosate is also commonly used in growing conventional oats. Choosing certified organic oat milk will once again ensure a lighter footprint.

This alternative milk is often prized for its naturally sweet, albeit slightly watery quality as well as its benefits for those who may have myriad food allergies. From a nutritional perspective, while it contains about 120 calories per cup, there isn’t much to it nutritionally unless it’s fortified (common additions are vitamins A, D, B12 and calcium). Many brands add oils as a thickener, which are often refined and processed. If rice milk is your beverage of choice, seek out organic brands to ensure better quality oils, and look for “high oleic” or “expeller pressed” versions, which tend to go through less processing and score a little higher in the healthier-for-you category.

Ecologically speaking, according to that same Oxford study mentioned above, rice may get the lowest score of all the plant-based milks. Growing methods that include “flooding” rice not only use a large amount of water (270 liters of water to produce a liter of rice milk) but also release methane gas into the atmosphere and are more likely to contaminate waterways when grown using agrochemicals like fertilizer and pesticides.

Dietitian Mary Purdy (RDN, MS) is an adjunct faculty member at Bastyr University and a regular speaker at health and nutrition conferences. She hosts the podcast “The Nutrition Show.”

Mowing down the grass ceiling