Editor’s note: PCC’s 15th and newest store opened in Bellevue in 2020. The city is a thriving urban center today, but it was once better known for berries and poultry than technology and office towers. We asked journalist Sherry Grindeland, a board member of the Eastside Heritage Center, to share stories of the city’s past and present. 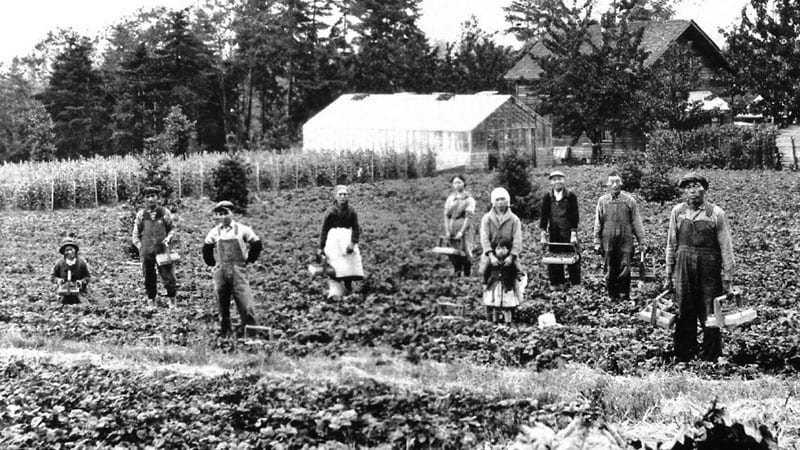 Today’s high rises in Bellevue are planted firmly in prime farmland that once helped feed the country and deck the nation’s halls at holiday time.

Successful farms maintain a presence on the Eastside today, particularly in its more rural reaches, such as Oxbow Farm and Conservation Center in Carnation. In Bellevue, though, where the population has grown from less than 6,000 at its 1953 incorporation to nearly 150,000 people today, remnants of these farms and ranches survive mainly thanks to civic priorities. Bellevue’s Parks and Community Services Department keeps the city’s agricultural history visible, overseeing some working farms both to preserve green space and to connect present-day residents with the city’s past. It’s a multifaceted legacy; stories could be dedicated just to the role of the city’s Japanese-American farmers, who were first channeled into the profession by discriminatory laws and became its leading force for years.

In a region where open space is at a premium and farms are facing ever-greater development pressures, Bellevue provides a striking example of how quickly a rural community can be transformed to an urban center. It’s also a potential model for still-quiet municipalities looking for creative paths to preservation.

“Bellevue’s heritage is rooted in agriculture,” said Michael Shiosaki, director of Bellevue Parks and Community Services. “Part of our mission as a department is educating residents and visitors about our connection to the land and providing access to what’s left of the farms.”

The city oversees two major blueberry farms, one in the Mercer Slough area and another at Larsen Lake along 148th Avenue Southeast. A former dairy farm noted for its still-standing twin barns has been turned into the popular Kelsey Creek Park. 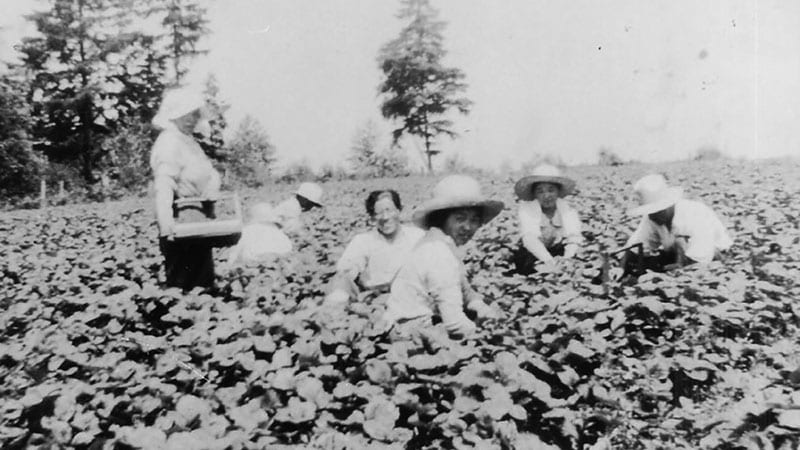 Strawberry pickers on the Takeshita Farm, 1933.

From timber to tech

The Eastside was bountiful for newcomers from elsewhere in the United States and from abroad—just as it had been for the Native American tribes who preceded them.

The land’s progression from wilderness to high tech centers amid urban areas and suburbs began in the late 19th century with harvesting different kinds of crops: timber and coal.

Evergreen forests filled with cedars, Douglas fir and other large trees covered the land. Veins of coal ran under the hills in south Bellevue, Newcastle and Issaquah.

The waterfront communities were logged first because they were closest to the original saw mills in Seattle and the logs could be rafted across Lake Washington. Loggers and mills moved eastward, leaving behind tree-stump-studded rolling hills of Bellevue and Kirkland. But clearing the trees paved the way for another kind of industry—farming. The rich land, now partially cleared, lured men, women and families. A number of the men were Civil War veterans who were able to claim free land for their service time.

One such couple, James Colman and his wife, Clarissa, was in that first wave of newcomers, claiming land between Bellevue and Renton, where Interstate 405 and the Seattle Seahawks headquarters sit today.

The Colmans had a dairy farm and grew vegetables in the 1880s and 1890s. Their biggest customer was the coal mining community at Newcastle. (James was murdered on a trip into Seattle in 1886. And Clarissa continued to farm, writing in her journal about churning 30 pounds of butter in a day.)

Neighbors weren’t far behind in changing the landscape.

They cleared stumps, created drainage ditches, built log homes and planted crops. Often the father would have a job elsewhere—in Seattle or in the nearby mines or mills or even in Alaskan canneries—and would leave his family to run the farm.

Even as land was prepared for cultivation, farmers could harvest cash crops. Then, as now, wild huckleberries and blackberries were easily sold at Seattle markets. But one had to be careful picking the wild berries. Bears, which still roamed freely in the area, also liked the fruit.

The area continued to draw immigrants. Japanese men who had worked on the railroads brought their families to the Eastside and the Kent-Auburn area to farm, as well as to outlying areas like Bainbridge and Vashon Island. Prejudicial laws barred Japanese immigrants from owning land, but they could rent it until their American-born children were old enough to buy it.

One of the most well-known farmers in Bellevue was Andrew Balatico, Jr. whose farm was a fixture in town well into the 1980s. He immigrated to the United States in 1926 from the Philippines.

In interviews with renowned historian Lucile McDonald and later with the Eastside Heritage Center, Balatico talked about dynamiting tree stumps to open up the land he first rented and later bought along the Mercer Slough.

Farming was hard work. Balatico commented that he would work for months on end without a day off. And to earn money to buy his farmland, he worked building a railroad tunnel in the Cascades, worked at fish canning factories in Alaska, and as a hired man on other farms.

“I picked strawberries and the other pickers told me, ‘Don’t eat the biggest strawberries, someone might be watching you,’” he said in one interview. He ended up with two farms and was challenged by working both places.

One of his best sellers when he took crops to Pike Place Market was the cauliflower—it was all white. His trick, he said, was to keep the leaves wrapped around the flower ball. He used rubber bands to keep the leaves in place. In the 1960s his pumpkin patch attracted busloads of school children from the Eastside and Seattle. Today that pumpkin patch is under the South Bellevue Park and Ride.

While today’s Eastside is fueled by tech dollars, for several decades one of the biggest cash crops was English holly used for holiday decorations. Edward Tremper planted acres of it in the Yarrow Point area in the early 1900s, eventually expanding his holly farm to encompass much of north Bellevue. In 1929, according to the journal Nature, Tremper’s holly ranch was the largest in the country.

It wasn’t a get-rich-quick crop.

Holly bushes take 15 to 18 years to mature. And harvesting was labor intensive. The holly ranch cut its last commercial crop in December 1956 and then the land was sold to developers. 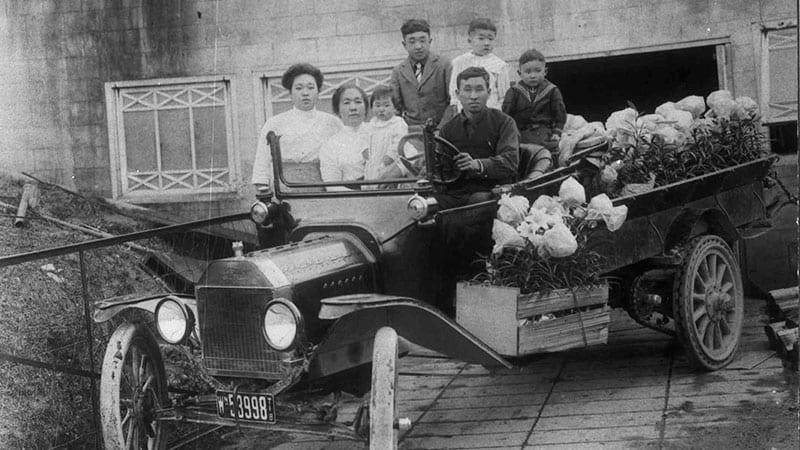 Houghton Greenhouse on Lake Washington Boulevard, operated by I. Saito family, then by K. Yabuki from 1917 to May 1942. 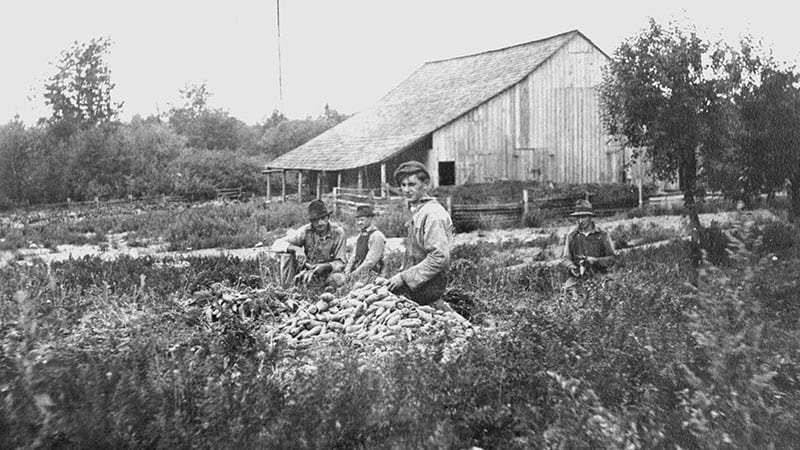 The region’s soil was impressively productive, especially for an area we now think of as an urban center. There was a blueberry farm in what is today’s downtown Bellevue. Orchards blossomed in the area that became Surrey Downs. Richard McDonald, the son of historian Lucile McDonald and a historian in his own right, recalled going pheasant hunting near Main Street and 108th Avenue Northeast in the 1950s.

In 1925 Hennig was selling his grapes for 10 cents a pound, considered an excellent price. But his best seller was grape juice that he made from the abundance of his vineyards.

Downey’s strawberry acreage was just as profitable. During the strawberry harvest season, he was harvesting 130 crates of strawberries a day and shipping 70 barrels of sliced berries daily for more than a month. (Each barrel contained 280 pounds of berries.)

His barrels of berries were one drop in an area that banked a lot on strawberries. 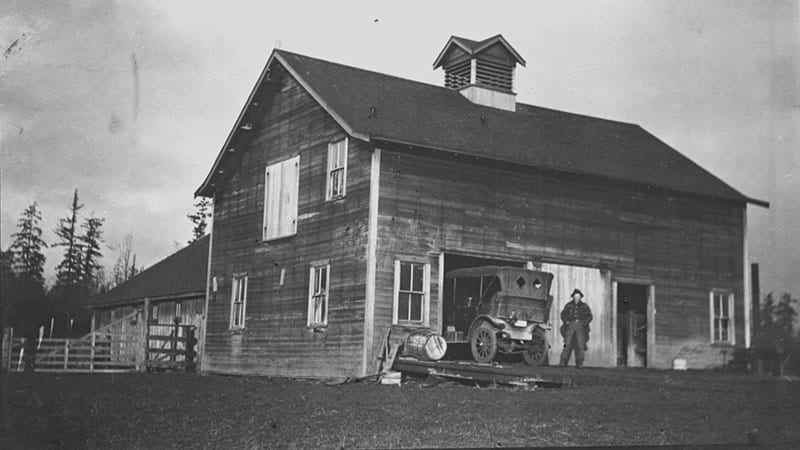 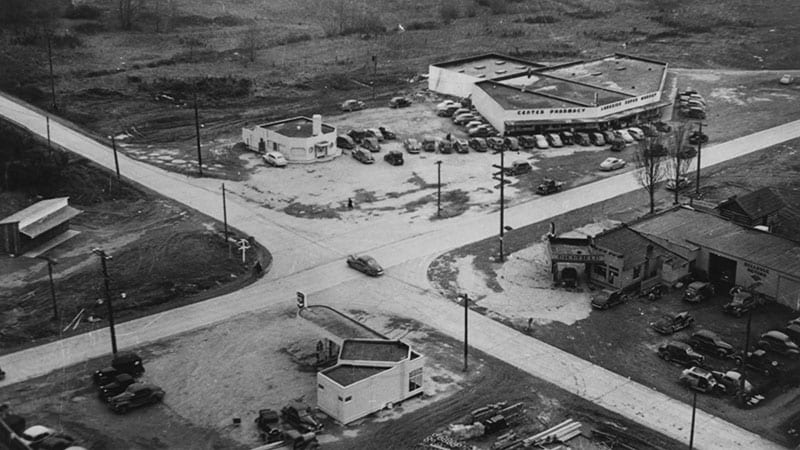 A festival and painful legacy

Indeed, strawberries turned Bellevue into a summer destination. Thousands came annually to the Main Street area of Bellevue and the Strawberry Festival to feast on strawberry shortcake and enjoy an outdoor celebration, especially impressive numbers before there were freeways and bridges across Lake Washington. The festival began in 1925, nearly three decades before Bellevue was incorporated as a city. It continued through 1941 (and was resurrected in 1987 by the Eastside Heritage Center’s predecessor, though it is currently on hiatus.)

Merchants in town loved having the visitors and opportunity to promote the city. Hidden behind the scenes were the farmers who actually produced the trademark crop; the majority of farmers fueling the festival were Japanese-American families.

Throughout what is today’s downtown Bellevue and Northup area, Japanese families cultivated strawberries as well as other crops such as peas and potatoes.

Alan Yabuki’s family had extensive greenhouses and a nursery near today’s Clyde Hill, Medina and State Route 520 that they started in 1919.

When Japanese-American residents were ordered to internment camps by President Franklin Roosevelt’s Executive Order 9066 after World War II began, many of the farmers lost their homes and land. By one account, 90% of Bellevue’s farmers were gone after the war. Of the approximately 60 families from the greater Bellevue area who were sent to Tule Lake in California in 1942, only 20 came back to the region.

Mitzie Hashiguchi, a member of the Takeshita family, recalled how difficult it was when the farmers returned, even for those who retained their land. Their fields had been fallow for several years and required intensive prep work before farming could resume.

After the end of World War II, the farmland became even more valuable. Developers, buoyed by the demand for houses as the King County population surged, bought vast tracts for development.

Shortly after a family purchased a 48-acre ranch to raise horses and beef cattle by today’s Sammamish High School in 1949, speculators began knocking on their door.

Eventually, like other farms and ranches and nurseries and greenhouses, the land became more valuable for homes than agriculture. Farms such as the Larsen Lake Blueberry Farm were landlocked by developments that sprang up seemingly overnight.

Yet even today, bits and pieces of farms still exist.

When they’re open, the trails by the Winters House in south Bellevue are sometimes lined with daffodils. They’re a reminder of the several bulb farms that were once on the Eastside. An Eastside Journal newspaper article on June 20, 1929 declared that the local flower bulb farms produced bulbs that rivaled anything Holland had.

Sheep are still sheared each spring at Kelsey Creek Park in Bellevue. It’s no accident that the park makes a big deal out of the event.

“The Farm Park’s agricultural heritage influences its programming,” said Shiosaki, the parks director. “We want to preserve that. That’s why it has classes like Painting with Chickens that combines art and hens.”

The city operates a P-patch community garden between Larsen and Phantom lakes, along the Lake Hills Green Belt. The peat bog soil—loved by the nine varieties of blueberries that were originally planted on the farm in 1944—still grows great crops.

A future for farming on the Buckley Plateau