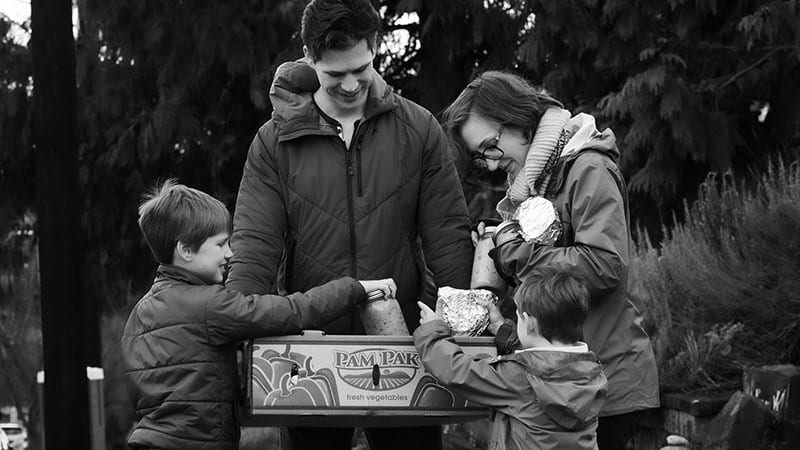 At the base of every bowl of soup is a story, often rooted in profound resourcefulness, creativity and rich personal history. My soups are no exception.

It was mid-February in Seattle when I found out I had a tumor in my brain. After learning that it was cancerous and being told I had a year to live, I noticed the gray and rain differently than I ever had before in the year since moving there; it made me cold, colder still with a shaved head studded with staples clinging to tender wounds. Cooking was out of the question—too physical—which stole from me my belonging and purpose in my own home. It was as if I had already started to disappear.

I spent those days shuffling to the kitchen in my slippers, taking note of the intentional movements demonstrated by the occupational therapist I met with after my brain surgery as I moved, to rummage the refrigerator for leftover takeout. Eating soulless food made by strangers behind a counter made me feel empty, I noticed, as I pawed the contents of the containers in my refrigerator for some sign of life with my spoon. The lifeless food I was eating had made me feel lifeless, too.

I was writing a journal online at that point, one where I was documenting my thoughts and feelings for my sons in case my prognosis proved to be accurate; it was frequented by everyone I’d ever met and many I hadn’t. There I sounded a call for a kind of help that I felt I desperately needed: one for homemade soup. I needed soulful food, meals that would help me and my family heal. One of my dearest and oldest friends managed the flood of responses, a rushing tide of Mason jars with my name on them.

Suddenly I was eating soup every day.

Soup began to take on a kind of electricity in my mind, a current that connected me to my community and conveyed their flow of support and sorrow and hope in a digestible way. Other than my keyboard, my simmering saucepan was the only conduit that tethered me to the outside world. Friends and strangers brought me soup, quietly placed in a cooler by our front door. Soup became a kind of currency of support transmitted through this magician’s box; into it went soup, from it came hope.

Eventually, this soup—mostly lentil, the overwhelmingly popular choice in my area of Seattle in which to infuse words that cannot be spoken—filled in the broken parts of my exhausted, worried being. Just like that I was full. And restored, ready to cook.

Every part of my life had shifted since my diagnosis, filled with a kind of meaning that perhaps only those negotiating mortality can fully comprehend. I had an acute clarity and profound appreciation for simplicity. In the process of finding strength, I listened to my body’s call for gentle foods and researched a point of entry for what my health could look like. My decisions were brutal, sudden and unyielding—overnight I severed lifelong romances with favorite ingredients, meals and recipes; and with them, any hopes I’d held for my beloved career as a cookbook author. I no longer ate sugar, chocolate or gluten, along with what otherwise read like a grocery list of produce, in an effort to calm my system as I sent it into war.

At first, I baked. I quested after these pillars of celebration and comfort as if following a road map to the person I was becoming, required for what I recognized as a joyful life shared with friends and family. It was also a way to translate the meaning of my past—my beloved baking recipes, the result of my most favorite projects—using my new vocabulary. It was challenging and rewarding and made me feel like myself.

Before I knew it, I had baked my way to a year from my diagnosis, the day I was told I was unlikely to see. In my kitchen was a cake I’d figured out along the way that I used to celebrate my rebirthday. Creating the recipe over numerous trials, tweaking the ingredients in a way that suggested, even if only in that single case, a kind of mastery of this unknown palette to result in a celebration of life, community and family made me feel whole, powerful—healthy, even.

Being diagnosed with an “impossible” cancer at a young age is surreal to say the least. The thing that no one says out loud, however, is that surviving it after emptying out the pockets of your life is surreal, too. Both are hard and strange. You survive to live a life you don’t recognize, surrounded by a lot of people who might always see you as sick or less capable somehow. I was confused, scared and searching for answers—the only thing I knew for sure is that I wasn’t done cooking or telling stories.

That is when I started to make soup and bring it to people I love, drop it on friends’ porches with some chocolate chip cookies during the rainiest months of Seattle winter. I was determined to return the loan of comfort I was given in spades and knew that cooking and connecting with people from an authentic place of love would lead me back to a version of myself that I recognize. Having people other than my family have a visceral reaction to my food restored my confidence as a cook. Nourishing them also nourished me.

There is something magical about soup, I discovered, as I cooked vats of the stuff each week. You assemble these disparate ingredients, and with time and care, they transform into something cohesive and altogether different. As with baked goods, soup makes the person it is served to feel something. The biggest characteristic difference between them, however, is utility and intent: Baked goods are usually celebratory; soup is somewhat its opposite. Soup holds a humble kind of magic. Foremost among its most impressive displays of sleight of hand, it transformed the gray and rain of Seattle winter into, simply, “soup weather” and me into a “survivor.”

My soup club, this quirky community of soup-obsessed loved ones in my corner of Seattle, let me feed the people they love most. The recipes in my cooking classes and forthcoming book are expressions of resilience and hope, and hold in them deep gratitude for health and life itself. 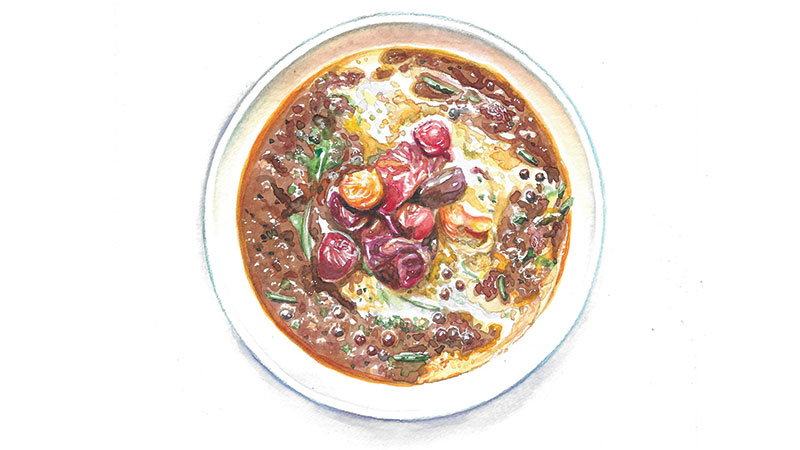 This soup is a study in yin and yang: part hearty lentil, part tender spring vegetable, part warm and roasty, part crisp and fresh. Essentially, it’s an early spring morning in a bowl.

Preheat oven to 425°F with racks dividing oven into upper and lower thirds. Line 2 large rimmed baking sheets with parchment. Place tomatoes on one prepared baking sheet, and mix carrots and scallions on the other. Drizzle contents of each baking sheet with 1 tablespoon oil and season with salt (about ½ teaspoon per sheet); toss to coat vegetables in oil. Roast vegetables without tossing, swapping the position of pans in oven halfway through, until tomatoes have released their juices and are browned in spots and the carrots are tender when pierced with a knife (about 20 minutes). Transfer ½ cup roasted tomatoes to a bowl; set aside. Use parchment to slide remaining vegetables into a blender with ginger, garlic and 2 cups water; blend until smooth. Place blender jar next to stove.

Heat remaining oil in a large, heavy pot over medium heat until hot. Add curry powder and nigella seeds and stir until foamy (about 1 minute). Stir in reserved vegetable purée, canned tomatoes, lentils and 6 cups (1 ½ quarts) water. Season generously with salt (about 1 teaspoon). Cover and bring to a boil. Reduce heat and simmer soup, uncovered, until broth is thickened and lentils are tender (about 45 minutes). Add lime juice and half coconut cream; stir in arugula by the handful. Season soup with additional salt and lime juice to taste. Serve soup drizzled with remaining coconut cream and topped with a few roasted tomatoes (or stir full amount of cream and tomatoes into pot before serving).

Sign up for PCC cooking classes with Caroline Wright here. Follow progress of Wright’s new book about her soup club at soupclubcookbook.com (anticipated release date September 2021). This essay appeared in slightly different form in an earlier project by Wright and is reprinted here by permission.